A master is a judge of limited jurisdiction in the superior courts of England and Wales and in numerous other jurisdictions based on the common law tradition. A master's jurisdiction is generally confined to civil proceedings and is a subset of that of a superior court judge or justice. Masters are typically involved in hearing specialized types of trials, case management, and in some jurisdictions dispute resolution or adjudication of specific issues referred by judges.

Besides the courts of England and Wales, masters may be found in the Republic of Ireland, Australia, New Zealand, Hong Kong, several Caribbean countries and a number of Canadian provinces. Several state courts in the United States utilize masters or similar officers and also make extensive use of special masters. In some jurisdictions such as the Federal Court in Canada the office of Prothonotary is similar to that of the master.

In some countries, the office of master has been renamed to Associate Judge. To date, this has occurred in several Australian States, in New Zealand and in the Canadian province of Ontario.

See also: Judiciary of England and Wales § Masters and Registrars

In England and Wales a master is a judge in the Chancery and Queen's Bench divisions of the High Court exercising jurisdiction in civil matters. When the master presides over a matter within her or his jurisdiction, the decision of the master has the same effect as a decision of a Justice of the High Court within the division of the court to which the master is appointed. [1] The role of a master in the High Court of Justice of England and Wales is concerned primarily with trial and case management of High Court civil claims in London excluding committals to prison, judicial review and criminal cases. There are masters in the Queen's Bench and Chancery Divisions and the Costs Office (Taxing Masters/Costs Judges) and their roles differ slightly. [2] [3]

Such a person is addressed in court as, for example, "Master Smith". This is so whether the master is male or female, or as either 'Master' or 'Judge'. A similar type of master exists in the Court system of Northern Ireland, in several Canadian and Australian jurisdictions as well as in other countries whose court system is based on that of England.

The office of master is of ancient origins dating from at least the 12th century, though masters in Chancery were abolished in the 19th century and a new office of Chancery Master was recreated later. [4] There are masters in the Chancery and Queen's Bench divisions of the High Court of Justice and the Costs Office of the High Court. The Senior Master of the Queen's Bench Division also bears the title of Queen's Remembrancer which is one of the oldest judicial offices in England.

In the Inns of Court, the members of the governing body are known as "Masters of the Bench" or, more commonly, "benchers". In the context of the functions they perform in that capacity (but not otherwise) they will be known as, for example, "Master Smith" (whether they are male or female). This will be so even if in other contexts they use a higher title: hence, a High Court Judge who is a Master of the Bench will be known in his or her Inn as "Master Smith", in private life as Sir John Smith, and on the bench as Mr Justice Smith; likewise a law lord will be known in the inn as "Master Woolf" even if he is privately and professionally known by the peerage title of "Lord Woolf".

Under the Court Officers Act 1926, the Master of the High Court and taxing masters are not judges but rather "quasi-judicial office holders". [6] [7]

The jurisdiction of a Master is fixed by provincial statute and the rules of court. Masters are appointed by the provincial government. As a result, while Masters sit in a superior court, they do not have the "inherent jurisdiction" of the judges of those courts, who are appointed by the federal government and whose authority is derived from the Constitution of Canada and the Crown. Their jurisdiction is usually limited to procedural and Interlocutory matters heard in chambers. Consequently, though of the superior court, Masters are concurrently subordinate to the judges of that court insofar as application of judicial precedent is concerned. [9] Masters commonly also sit as Registrars in Bankruptcy.

In the Federal Court of Canada, a judicial officer with much the same powers as a Master is called a Prothonotary.

Masters and Prothonotaries are independent judicial officers although they do not have the full level of security of tenure afforded to federally appointed judges.

In Alberta, British Columbia and Manitoba, masters have the same terms of appointment as provincial judges. This was formerly the case in Ontario as well but after the High Court of Justice and District Courts were merged, in 1986 a new office of Case Management Master was created.

In Ontario, associate judges have all of the authority of traditional masters as well as additional jurisdiction to manage actions and engage in dispute resolution processes. They are appointed by Order in Council and can only be removed for cause by the Chief Justice following a formal disciplinary process. [11]

In Ontario the distinction between "chambers" and "court" has been abolished. When associate judges preside they sit as the court and their function is to perform tasks that would otherwise fall to superior court judges. Besides the jurisdiction to hear most interlocutory motions in civil matters, associate judges in Ontario also preside at status hearings, case conferences and pre-trials. They frequently act as referees to hear trials in construction lien matters, mortgage references or issues referred by judges. Associate judges also provide dispute resolution services and sit as Registrars in Bankruptcy.

Main article: Master of the High Court of Fiji

The Masters are the junior judges on the High Court of Fiji.

The King's Bench ; or, during the reign of a female monarch, the Queen's Bench, is the superior court in a number of jurisdictions within some of the Commonwealth realms. The original King's Bench, founded in 1215 in England, was one of the ancient courts of the land and is now a division of the High Court of Justice of England and Wales. In the Commonwealth, the term King-on-the-Bench, or Queen-on-the-Bench is a title sometimes used to refer to the monarch in their ceremonial role within the justice system, as the fount of justice in that justice is carried out in their name. 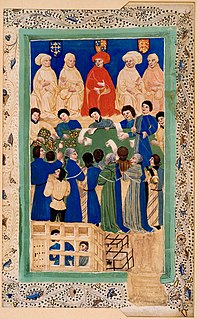 The Delaware Court of Chancery is a court of equity in the American state of Delaware. It is one of Delaware's three constitutional courts, along with the Supreme Court and Superior Court. Since 2018, the court consists of seven judges. The chief judge is called the Chancellor, and the remaining judges are called Vice Chancellors. The chancellor and vice chancellors are nominated by the governor and confirmed by the state senate for 12-year terms.

The Administrative Court is a specialist court within the King's Bench Division of the High Court of Justice of England and Wales. It deals mainly with administrative law matters and exercises the High Court's supervisory jurisdiction over inferior courts and tribunals and other public bodies. 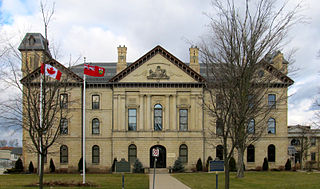 Accounts of the Indigenous law governing dispute resolution in the area now called Ontario, Canada, date from the early to mid-17th century. French civil law courts were created in Canada, the colony of New France, in the 17th century, and common law courts were first established in 1764. The territory was then known as the province of Quebec.