Maui Time Weekly (also known as Maui Time Magazine, Maui Time, and the Maui Times) is a free alternative newspaper published weekly in the county of Maui, state of Hawaii. The paper is owned mostly by its publisher, Tommy Russo.

Maui Time Weekly was launched in 1997. It serves all of Maui, and is distributed every Thursday. The paper has remained independently owned and operated throughout its existence.

Russo noted the lack of a strong community-based publication while traveling on Maui. At the time he was completing degree studies at Chico State University building a strong sales background in print media during his employment with a local paper in Chico, California. He teamed up with classmate D'Antonio after D'Antonio's music group, Sunset Red concluded two tours of Lahaina in 1996. Within a year, the two Chico, California transplants moved to Maui to start an independent community publication. Maui Time established a free and independent voice to represent the wide variety of views, opinions, lifestyles, and rich host culture that Maui offers.

Publisher Tommy Russo grew Maui Time into a weekly publication with Maui news, community features, arts and entertainment as its focus. Maui Time gained admission into the Association of Alternative Newsweeklies in 2004.

The paper runs a number of regular columns, most with an opinionated slant, that examine aspects of local government and politics. Maui Time also offers coverage of the local music scene, and carries Chuck Shepherd's syndicated column News of the Weird.

The Dallas Observer is a free digital and print publication based in Dallas, Texas. The Observer publishes daily online coverage of local news, restaurants, music, and arts, as well as longform narrative journalism. A weekly print issue circulates every Thursday. The Observer has been owned by Voice Media Group since January 2013. 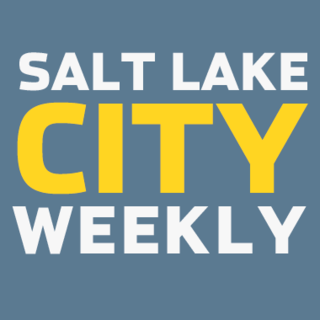 Metroland was an alternative newspaper that was published weekly in Albany, New York and mainly served the Capital District area. Distributed free of charge, the paper offered local arts and music scene coverage, news and feature articles, and political columns with a mostly liberal bent. It billed itself as "The Capital Region's Alternative Newsweekly".

The Detroit Metro Times is a progressive alternative weekly located in Detroit, Michigan. It is the largest circulating weekly newspaper in the metro Detroit area.

Donna K. Ladd is an American investigative journalist who helped create The Jackson Free Press, an award-winning freely distributed community magazine. She has received international recognition for her racial reconciliation efforts in Mississippi and nationally, helping bring "cold" civil rights cases to justice and for her coverage of Frank Melton, the controversial mayor of Jackson, Mississippi.

The Jackson Free Press, referred to often as simply "JFP", is a for-profit community magazine available free of charge at various retail establishments in Jackson, Mississippi founded in 2002 and owned by Mississippi native Donna Ladd and author and technology expert Todd Stauffer. It is currently the only member of the Association of Alternative Newsweeklies (AAN) in the state of Mississippi. JFP distributes approximately 15,000 free copies to 425+ locations throughout the Jackson metropolitan area every other Wednesday. It is known locally for its annual Best of Jackson awards as nominated by its readers and its online political blogs. It also has sponsored numerous local events such as the Fondren ArtMix, JubileeJam, the Chick Ball, the "Race, Religion & Society Series" and the Crossroads Film Festival. 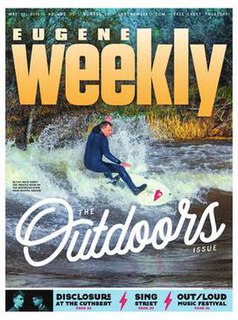 Eugene Weekly is an alternative weekly newspaper published in Eugene, Oregon. The paper, published every Thursday, has a circulation of 39,850. It publishes an annual "Best of Eugene" list, a restaurant guide ("Chow!"), and special sections on festivals, music, wine, health and travel. Eugene Weekly covers local and state politics, news, arts and culture, and it publishes investigative and solutions journalism.

Gambit is a New Orleans, Louisiana-based free alternative weekly newspaper that was established in 1981. Gambit features reporting about local politics, news, food and drink, arts, music, film, events, environmental issues and other topics, as well as listings. Gambit publishes 36,000 papers each Tuesday, which are distributed to 400 locations in the New Orleans metro area beginning Sunday afternoon.

Boulder Weekly is an alternative newsweekly that publishes every Thursday in Boulder, Colorado. The paper is a member of the Association of Alternative Newsweeklies (AAN) and is owned and published by Stewart Sallo.

Orlando Weekly is a liberal progressive alternative newsweekly distributed in the Greater Orlando area of Florida. Every Thursday, 40,000 issues of the paper are distributed to more than 1,100 locations across Orange, Osceola and Seminole counties.

The Missoula Independent was a free weekly alternative newspaper in Missoula, Montana, United States. It was acquired by Lee Enterprises, owner of the daily Missoulian, in 2017. On September 11, 2018, Lee Enterprises shut down the Independent without notice.

Isthmus is a free alternative weekly newspaper based in Madison, Wisconsin (US). Founded by Vince O'Hern and Fred Milverstedt in 1976, the paper is published on Thursdays, and has a weekly circulation of 50,000. The newspaper offers local news, opinion, sports and the arts, dining and music scenes.

The Santa Fe Reporter (SFR) is an alternative weekly newspaper published in Santa Fe, New Mexico. First published in 1974, the Santa Fe Reporter features reports on local news, politics, art and culture, and is published once a week on Wednesdays. Since 1997, the Reporter has been owned and published by Portland, Oregon-based City of Roses Newspaper Company, which also publishes Willamette Week and Indy Week. Since September 2016, the paper's publisher & editor has been Julie Ann Grimm, with Anna Maggiore serving as associate publisher & advertising director. Julie Ann Grimm had previously been editor of the paper since August 2013. Alex De Vore has been covering music, arts and culture for the Reporter since 2008, and became culture editor in 2016. The Reporter celebrated its 40th anniversary in June 2014.

The North Bay Bohemian is a free weekly newspaper published in the North Bay subregion of the San Francisco Bay Area, in California, United States. The newspaper is distributed in Sonoma and Napa counties. Since October 2019, Daedalus Howell has been its editor.

The San Antonio Current is a free weekly alternative newspaper in San Antonio, Texas, USA. The Current focuses on investigative journalism, political analysis, and critical coverage of local music and culture. It also contains extensive and up-to-date event listings for San Antonio. A member of the Association of Alternative Newsweeklies, its style combines tough journalism with humor. The Current has won many journalism awards, often for coverage of subjects and controversies that are largely ignored by other South Texas media outlets.

Las Vegas CityLife, founded in August 1996, was the oldest alternative weekly newspaper in Southern Nevada and covered news about the Las Vegas Valley and surrounding areas. Coverage included news, politics, arts, and culture reporting in print and online formats. The publication is owned by Stephens Media Group but was formerly owned by Wick Communications. Its primary competitors were Las Vegas Weekly and Vegas Seven. Publication ceased on January 30, 2014.