The Hawaii Catholic Herald is the present-day version of a series of official newspapers of the Roman Catholic Diocese of Honolulu and its predecessor vicariate apostolic. Established in January, 1947 to replace the publication called the Catholic Herald Newspaper (established in November, 1936), it is published by the Roman Catholic Bishop of Honolulu with a readership of approximately 15,400 people across the state.

The Cathedral Basilica of Our Lady of Peace — also known by its original French name Cathédrale de Notre Dame de la Paix, its Portuguese variant Catedral de Nossa Senhora da Paz and its Hawaiian derivative Malia o ka Malu Hale Pule Nui — is the mother church of the Diocese of Honolulu and houses the cathedra of the Bishop of Honolulu in Honolulu, Hawaiʻi. It is located at the north end of Fort Street Mall in downtown Honolulu. Another cathedra was installed in the Co-Cathedral of Saint Theresa of the Child Jesus, also serving the diocese.

The Roman Catholic Bishop of Honolulu is the diocesan bishop of the Roman Catholic Diocese of Honolulu in the United States, which encompasses the entire state of Hawaii and the unincorporated Hawaiian Islands. The Honolulu diocese is a suffragan see in the metropolitan province of the Archbishop of San Francisco. The Bishop of Honolulu is a member of the United States Conference of Catholic Bishops. He has two ecclesiastical seats: the Cathedral of Our Lady of Peace and the Co-Cathedral of Saint Theresa of the Child Jesus, both located in the City of Honolulu.

Sacred Hearts Academy also known as Sacred Hearts or SHA is located on 3253 Waiʻalae Avenue, in the town of Kaimuki in Honolulu, Hawaiʻi, is a historic Roman Catholic college preparatory school for girls founded in 1909 to serve the needs of early Hawaiʻi Catholics in the former Territory of Hawaiʻi. The school maintains a special relationship with Chaminade University of Honolulu and the all-boys Saint Louis School, both administered by the Society of Mary.

Joseph Anthony Ferrario was the third bishop of the Roman Catholic Diocese of Honolulu and served from 1982 to 1993.

Francis A. Marzen was a priest of the Roman Catholic Diocese of Honolulu, former editor of the Hawaii Catholic Herald and an information specialist for the City & County of Honolulu in the administration of Mayor Frank Fasi. 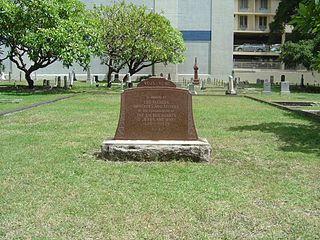 Marc R. Alexander is a Roman Catholic priest of the diocese of Honolulu. Prior to February 1, 2006, he served the diocese as diocesan theologian and pastor of a clustered parish known as the Manoa-Punahou Catholic Community. 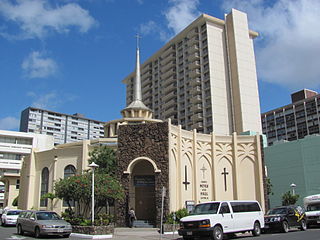 Saints Peter and Paul Catholic Church is a Roman Catholic church in Honolulu, Hawaii. The church belongs to the East Honolulu vicariate of the Roman Catholic Diocese of Honolulu, and serves the Ala Moana, Ala Wai, Kapiolani, Kewalo, and McCully districts of the city.

Benedict M. Vierra was a priest of the Roman Catholic Church. Father Vierra underwent clerical formation in the Philippines where he was ordained to the presbyterate for the Roman Catholic Diocese of Honolulu. On his return to Honolulu, he engaged in pastoral work and was instrumental in the building of the current co-cathedral of the diocese of Honolulu, consecrated under the title of Saint Theresa of the Child Jesus, the French Carmelite mystic and doctor of the church. His close ties to the Philippines enabled him to persuade the Bishop of Honolulu to allow several Philippine religious orders and diocesan clergy to minister to the growing number of Filipino immigrants to Hawaii. Pope John XXIII appointed Father Vierra as a prothonotary apostolic, with the title of monsignor, the first in the diocese of Honolulu, the highest non-episcopal prelate entitled to wear the mitre and to pontificate at liturgy, with due regard for the precedence of the diocesan bishop in accordance with Roman Pontifical. He remains the only Hawai'i cleric on whom this honor has been conferred. He also served as vicar general of the Diocese of Honolulu.

The following is a timeline of the history of the city of Honolulu, on Oahu, in the U.S. state of Hawaii.

Zepherin "Kepelino" Kahōʻāliʻi Keauokalani was a Native Hawaiian cultural historian who wrote Kepelino's Traditions of Hawaii. Born into a family descended from both the Hawaiian priestly class and nobility, Kepelino converted to Roman Catholicism with his family at an early age. He was educated by Catholic missionaries and briefly joined the mission to Tahiti before returning to finish his education in Honolulu. He became an editor of a Hawaiian language newspaper for Hawaiian Catholics and contributed many written works to the history and culture of Hawaii. Serving as a private secretary to Queen Emma of Hawaii, he espoused her candidacy for the throne in the 1874 monarchical election against Kalākaua. After the queen's loss in the election and Kalākaua's accession to the throne, Kepelino became involved in an attempt to overthrow the new king in favor of Queen Emma, which led to his trial and imprisonment for treason.

Sacred Heart Church-Punahou is located at 1701 Wilder Avenue, in Honolulu, in the U.S. state of Hawaii. The church was dedicated in 1914, and its adjacent Bachelot Hall was dedicated in 1923. The property's rectory was built in 1927. It was added to the National Register of Historic Places listings on February 6, 2001.

Catholic Herald is a prominent Catholic publication in London.