The Mayflower Curling Club, which was founded in 1905, since 1962 has been located at 3000 Monaghan Drive in Nova Scotia's Halifax Regional Municipality in Halifax.

The club is one of the premier curling rinks in Nova Scotia, being home to the teams headed by Colleen Jones, Mark Dacey, Shawn Adams, and Heather Smith-Dacey. The club was host for the curling events during the 2011 Canada Winter Games.

Colleen P. Jones is a Canadian curler and television personality. She is best known as the skip of two women's world championship teams and six Tournament of Hearts Canadian women's championships, including an unprecedented four titles in a row and a record 138 wins as a skip. She also serves as a reporter and weather presenter for the Canadian Broadcasting Corporation, and as a curling commentator for NBC in the United States, particularly during the 2010 Winter Olympics.

Mark Dacey is a Canadian curler originally from Saskatchewan. He was based at the Mayflower Curling Club in Halifax, Nova Scotia.

In 1912 the club's then-premises on Agricola Street was used as a temporary morgue for the bodies of Titanic disaster victims recovered from the North Atlantic by the Halifax-based ship the CS Mackay-Bennett , as it was the only site in the city that was both sufficiently large and cold enough for the task. [1] 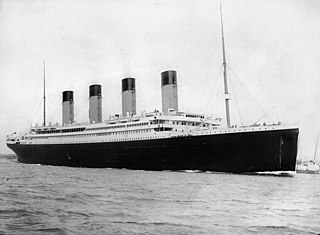 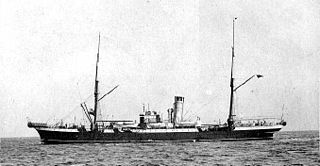 CS Mackay-Bennett was a cable repair ship registered in London, England, owned by the Commercial Cable Company. The ship is remembered for being the ship that recovered the majority of the bodies of the victims of the Titanic sinking. 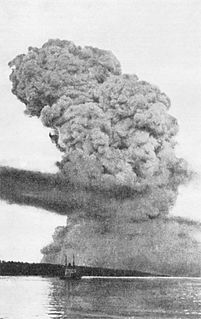 The Halifax Explosion was a maritime disaster in Halifax, Nova Scotia, Canada, which happened on the morning of 6 December 1917. The Norwegian vessel SS Imo collided with SS Mont-Blanc, a French cargo ship laden with high explosives, in the Narrows, a strait connecting the upper Halifax Harbour to Bedford Basin, causing a large explosion on the French freighter, devastating the Richmond district of Halifax. Approximately 2,000 people were killed by the blast, debris, fires or collapsed buildings, and an estimated 9,000 others were injured. The blast was the largest man-made explosion at the time, releasing the equivalent energy of roughly 2.9 kilotons of TNT (12,000 GJ).

The 2010 Canadian Mixed Curling Championship was held Nov. 14-21, 2009 at the Burlington Golf and Country Club in Burlington, Ontario. Nova Scotia won its seventh Mixed title, and skip Mark Dacey won his second title with wife, Heather as his mate.

The 2005 Scott Tournament of Hearts, the Canadian women's curling championship, was held at Mile One Stadium in St. John's, Newfoundland and Labrador from February 19 to 27, 2005. The tournament included 12 teams, one from each of Canada's provinces, one from Canada's territories and the defending champion Colleen Jones, whose team was known as Team Canada. Oddly, Jones' team is the only returning team from the 2004 Scott Tournament of Hearts as all other provincial champions lost in their playdowns. Colleen Jones, who had won the last four tournaments is joined by Cathy King who won the tournament in 1998. Also participating is 2002 Manitoba champion Jennifer Jones, 2001 Yukon/Northwest Territories champion Kerry Koe, 4-time Newfoundland champion Heather Strong, 2000 Nova Scotia champion Kay Zinck, 3-time Prince Edward Island champion skip Rebecca Jean MacPhee, 1996 Quebec champion second Brenda Nicholls, 1993 New Brunswick champion second Sandy Comeau as well as newcomers Kelly Scott of British Columbia, Jenn Hanna of Ontario and Stefanie Lawton of Saskatchewan.

Kim Kelly is a Canadian curler from Dartmouth, Nova Scotia. She currently throws skip stones for Colleen Jones, whom she has won five national championships and two world championships.

Mary-Anne Arsenault is a Canadian curler from Halifax, Nova Scotia. She is a five-time Canadian Champion, and two-time World Curling Champion. Arsenault has skipped her own team since 2007.

The 2004 Continental Cup of Curling was held in Medicine Hat, Alberta from November 25 to 28. North America won its second title, defeating Team Europe 228-172.

Laine Peters [pronounced: LAY-nee] is a Canadian curler, from Calgary. Peters has played in 11 Tournament of Hearts and six World Championships.

Danielle Parsons is a Canadian curler from Fredericton, New Brunswick.

Teri Udle is a Canadian curler from Halifax, Nova Scotia. She plays lead for Jill Brothers.

Jennifer "Jenn" Baxter is a Canadian curler from Lower Sackville, Nova Scotia. She currently plays lead for Mary-Anne Arsenault out of the Mayflower Curling Club in Halifax.

Heather Smith is a Canadian curler from Halifax, Nova Scotia. While married to Brier champion Mark Dacey, she was known as Heather Smith-Dacey.

Mary Mattatall is a Canadian curler from Dartmouth, Nova Scotia.

Jennifer "JC" Crouse is a Canadian curler from Timberlea, Nova Scotia. She currently plays third for Julie McEvoy out of the Halifax Curling Club in Halifax, Nova Scotia.