Chief Rabbi is a title given in several countries to the recognised religious leader of that country's Jewish community, or to a rabbinic leader appointed by the local secular authorities. Since 1911, through a capitulation by Ben-Zion Meir Hai Uziel, Israel has had two chief rabbis, one Ashkenazi and one Sephardi. 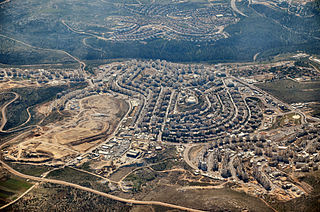 Modi'in Illit is a Haredi Israeli settlement and city in the West Bank, situated midway between Jerusalem and Tel Aviv. Modi'in Illit was granted city status by the Israeli government in 2008. It is located six kilometres northeast of Modi'in-Maccabim-Re'ut and is often referred to as Kiryat Sefer, the name of its first neighborhood, established in 1994. It was built on the land of five Palestinian villages: Ni'lin, Kharbata, Saffa, Bil'in and Dir Qadis. Modi'in Illit encompasses the neighborhoods of Kiryat Sefer and Achuzat Brachfeld. In 2017 it had a total population of 70,081, making it the largest Jewish settlement in the area.

He was born at Bnei Brak and studied at the Ponevezh yeshiva and afterward at Kol Torah under Rabbi Shlomo Zalman Auerbach.

Kol Torah is a yeshiva in the Bayit Vegan area of Jerusalem, Israel founded in 1939. It is famous for its high standards in Talmudic teaching and quality of students, who are recognised as being some of the foremost Talmudists in the world.

After his marriage, he moved to Jerusalem and continued his studies at the Brisk yeshiva under Rabbi Avrohom Yehoshua Soloveitchik.

Rabbi Avraham Yehoshua Soloveitchik is the rosh yeshiva of Yeshivas Brisk, one of the Brisk yeshivas in Jerusalem, Israel that attracts Talmudic students from the United States. The Talmudic college has over 1000 students. The school focuses on Kodashim, the Talmudic Seder dealing with sacrificial offerings.

When his father died in June, 1996, he succeeded him as the second rabbi of Modi'in Illit.

His wife is an educator and writer.

Mir Yeshiva or Mirrer Yeshiva may refer to: 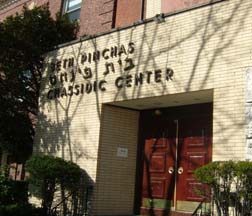 Boston is a Hasidic sect, originally established in 1915 by Chief Rabbi Pinchas David Horowitz. Following the custom of European Chassidic Courts, where the Rebbe was called after the name of his city, the Bostoner branch of Hasidic Judaism was named after Boston, Massachusetts. The most senior and well-known of the Bostoner Rebbes in contemporary times was Grand Rabbi Levi Yitzchak Horowitz, who died in December 2009.

Rabbi Yaakov Yisrael Kanievsky, known as The Steipler or The Steipler Gaon (1899–1985), was an ultra-Orthodox rabbi, Talmudic scholar, and posek ("decisor" of Jewish law), author of the book "Kehilos Yaakov" on the Talmud.

Rabbi Israel Mendel Kaplan or Yisrael Mendel Kaplan, known as "Reb Mendel" served as a teacher in the Hebrew Theological College in Chicago and in the Philadelphia Yeshiva to many of the men who were to become the leaders of Orthodox American Jewry.

Nosson Tzvi Finkel was an American-born Haredi Litvish rabbi and rosh yeshiva (dean) of the Mir Yeshiva in Jerusalem, Israel. During his tenure from 1990 until his death in 2011, the Mir Yeshiva grew into the largest yeshiva in Israel with nearly 6,000 undergraduate students and over 1,600 avreichim. According to one estimate, he taught 25,000 students over his lifetime. Although he suffered from Parkinson's disease for the last 28 years of his life, experiencing involuntary spasms and slurred speech, he did not let his illness stop him from learning Torah for long hours, delivering regular shiurim (lectures), and fund-raising for his yeshiva around the world. He raised an estimated US$500 million for the Mir during his tenure as rosh yeshiva. He was a member of the Moetzes Gedolei HaTorah of Degel HaTorah. He was known for his Torah erudition and his warmth and concern for his students.

The Mir Yeshiva, known as the Mirrer Yeshiva or The Mir, is an Orthodox Jewish yeshiva in Beit Yisrael, Jerusalem, Israel. With over 8,500 single and married students, it is the largest yeshiva in the world. Most students are from the United States and Israel, with many from other part of the world such as UK, Belgium, France, Mexico, Switzerland, Argentina, Australia and Canada.

The Mir Yeshiva, commonly known as the Mirrer Yeshiva or The Mir, was a Lithuanian yeshiva located in the town of Mir, Russian Empire. After relocating a number of times during World War II, it has evolved into three yeshivas, one in Jerusalem, with a subsidiary campus in Brachfeld, Modi'in Illit, and the other two in Brooklyn, New York: the Mir Yeshiva, and Bais Hatalmud. 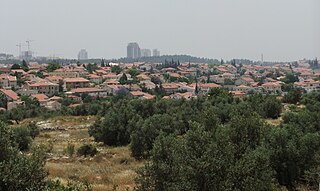 Hashmonaim is an Israeli settlement located in the western section of the West Bank, off Route 443. Hashmonaim is located two kilometers east of Modi'in-Maccabim-Re'ut, midway between Jerusalem and Tel Aviv and is under the jurisdiction of the Mateh Binyamin Regional Council of Israel. In 2017 it had a population of 2,820. 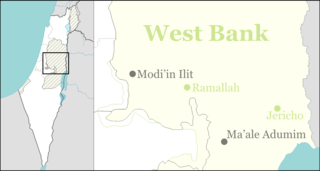 Neria, also known as Talmon Tzafon or Talmon Bet is a national-religious Israeli settlement in the West Bank. Located next to Talmon and between Modi'in Illit and Ramallah, it is organised as a community settlement and falls under the jurisdiction of Mateh Binyamin Regional Council. It has a population of around 300 families. The international community considers Israeli settlements in the West Bank illegal under international law, but the Israeli government disputes this.

Yochanan Sofer was the Rebbe of the Erlau dynasty,which though not the largest in the number of its adherents is still a significant movement within Haredi Judaism. He was born in Eger (German: Erlau), Hungary, where his father and grandfather served as Grand Rabbis. After surviving the Holocaust, he continued their legacy by founding a yeshiva and a movement in their name, first in Hungary and then a few years later in Jerusalem, Israel.

Erlau, is a Haredi dynasty of Hungarian origin, which follows the teachings of the Chasam Sofer and is often considered Hasidic.

Rabbi Zamir Cohen, is the chairman of the Hidabroot organization and producer of the first Orthodox religious Jewish television channel in Israel.

Avrohom Yaakov Friedman was the fifth Rebbe of the Sadigura Hasidic dynasty. In 1979 he succeeded his father, the fourth Sadigura Rebbe, and took his seat on the Moetzes Gedolei HaTorah. He oversaw the growth of Sadigura communities in Israel and in London, Antwerp, and New York City.

Rabbi Dov Landau is the rosh yeshiva of the Slabodka yeshiva of Bnei Brak alongside with Rabbi Moshe Hillel Hirsch.

Rabbi Yitzchok Scheiner (born Nov. 5, 1922) is the rosh yeshiva of the Kamenitz yeshiva of Jerusalem.

Yeshiva Ohr Elchonon is a Lithuanian-style Orthodox yeshiva in Jerusalem, Israel. The yeshiva was initially established in 1953 in Los Angeles, California, by Rabbi Simcha Wasserman, who named it in memory of his father, Rabbi Elchonon Wasserman, rosh yeshiva in Baranowicz, who was murdered in the Holocaust in Lithuania. The yeshiva operated in Los Angeles from 1953 to 1977, when it was sold to the Chabad movement. After Wasserman immigrated to Jerusalem, he established another Yeshiva Ohr Elchonon in the Ezrat Torah neighborhood in 1979. A second branch was opened in the Romema neighborhood in 1993. Ohr Elchonon enrolls hundreds of boys in yeshiva ketana and yeshiva gedolah, and close to 100 married men in its kollel. Additional yeshiva ketana branches have been established in the Israeli cities of Modiin Illit, Rishon Letzion, and Tiberias.

Aaron Monsonego was a Moroccan rabbi who was the Chief Rabbi of Morocco.