Melina Ayres (born 13 April 1999) is an Australian football (soccer) player, who currently plays for Breiðablik in the Icelandic Besta-deild kvenna on a loan from South Melbourne. She has previously played for Melbourne City.

In 2017, Ayres signed for her junior club South Melbourne FC after spending the previous WNPL Victoria season at Alamein FC. [1] Ayres went on to sign for South Melbourne the following year. [2]

In September 2015 at age 16, Ayres signed with Melbourne City for the 2015–16 season playing primarily in a striker position. [3] [4] She scored her first goal for the club during injury time of the team's inaugural match against Sydney FC solidifying the 6–0 win. [5]

On 22 September, Ayres joined Melbourne Victory on a one-year deal. Highlights of her 2017/2018 season include a stunning goal against Melbourne City FC in round 11 when she won the ball from Alanna Kennedy and chipped Matildas goalkeeper Lydia Williams from close to halfway. Just one week earlier, Ayres scored another cracker of a strike against ladder leaders Brisbane Roar. With no clear options on hand, Ayres hit a right foot rocket past Matildas goalkeeper Mackenzie Arnold into the top right bin, leaving the keeper with no chance. [6] In October 2020, Ayres signed a three-year extension with Melbourne Victory. [7]

In April 2022, Ayres joined Breiðablik of the Icelandic Besta-deild kvenna on a loan from Melbourne Victory. [8]

Ayres played in Malaysia for the under-16 national team. Ayres was called up to the Australian under-20 squad for the 2016 AFF Women's Championship in July 2016 held in Myanmar. [9]

Ayres is currently studying a Bachelor of Environmental Science at Deakin University. [10] 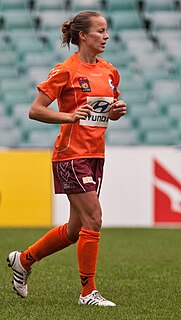 Aivi Belinda Kerstin Luik is an Australian soccer player who plays as a midfielder for Italian Serie A club Pomigliano. She represented the Australia women's national team, making over 30 appearances.

The Besta-deild kvenna is the top-tier women's football league in Iceland. It features 10 teams that play a double round robin to decide the champion, which qualifies for a spot in the UEFA Women's Champions League. The 2022 season was the first season of the league after it was rebranded as Besta-deild kvenna; previously, it had been named Úrvalsdeild kvenna.

Emma Kay Checker is an Australian soccer player who plays as a defender for Selfoss of the Icelandic Úrvalsdeild kvenna. She has represented Australia at under-17, under-20 and senior levels. She made her senior international debut for Australia in November 2012 at the age of 16. 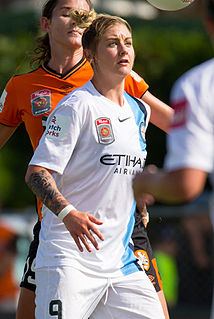 Grace Maher is an Australian football player who currently plays for Canberra United in the Australian W-League, and KR in the Úrvalsdeild kvenna in Iceland. She previously played for Melbourne Victory.

The 2017 Úrvalsdeild kvenna was the 46th season of the women's football top level league in Iceland. Stjarnan was the defending champion. The season began on 27 April and concluded on 29 September. Þór/KA were crowned champions.

Ingibjörg Sigurðardóttir is an Icelandic footballer who plays as a defender for Vålerenga in the Toppserien, the top-tier women's football league in Norway. A multi-sport athlete in her youth, she played in the Icelandic top-tier basketball league and for Iceland's junior national basketball teams before fully focusing on football.

The 2019 Úrvalsdeild kvenna was the 48th season of the women's football top level league in Iceland. Breiðablik is the defending champion.

Anna Petryk is a Ukrainian footballer who plays as a midfielder for Breiðablik in the Icelandic Besta-deild kvenna and the Ukraine women's national team.

The 2020 Úrvalsdeild kvenna was the 49th season of the women's association football highest division league in Iceland.Due to the effects of the COVID-19 pandemic the season started late on 12 June 2020. Valur were the defending champions after claiming the 2019 championship.

Þórdís Hrönn Sigfúsdóttir is an Icelandic footballer who plays for Valur. She has made two appearances for the Iceland women's national football team.

The 2021 Úrvalsdeild kvenna, known as Pepsi Max deild kvenna for sponsorship reasons, is the 50th season of the women's association football highest division league in Iceland. Breiðablik are the defending champions after claiming the 2020 championship.