Hopkins started his career as a trainee with Fulham, going on to make over 200 first team appearances for the club. [2] This was followed by a four-year spell at Crystal Palace, including a loan to Plymouth Argyle in 1991–92. [3] He spent a few months at Bristol Rovers in 1992, before spending the remaining five years of his Football League career with Reading. [3]

While at Reading, he was part of the team that narrowly missed out on promotion to the Premier League in the 1994–95 season, losing 4–3 after extra time in the playoff final against Bolton Wanderers.

After a move to Malaysian football with Selangor where he was made captain, Hopkins moved to Australia in October 1999 as a player-coach with Gippsland Falcons in the National Soccer League. [4]

Hopkins made his debut for the Wales national under-21 football team during the 1981/82 season against France. He made a total of 5 under-21 appearances during that season and the next. [5]

He made his debut for the senior Welsh team on 31 May 1983 against Northern Ireland, and he made 16 appearances for Wales over the next seven years, with his final game coming against Costa Rica on 20 May 1990. [5]

Hopkins was coach of the Brisbane Roar women's team from their inaugural season in 2008, in which he led the team to a championship-premiership double. [6] [7] On 15 June 2012 it was announced he had been appointed as senior first team Assistant manager. [8] On 30 April 2013, at the end of Brisbane Roar's 2012–13 A-League season, the Roar announced that he would become the Brisbane Roar Youth coach for the 2013–14 A-League National Youth League season. [9] On 26 November 2014, following the resignation of Ron Smith, Hopkins moved into the role of assistant coach of Brisbane Roar. [10] On 17 June 2016, Hopkins was appointed head coach of the Melbourne Victory women's team. [11]

John Aloisi is an Australian former association football player and current head coach of A-League club Western United. In a professional career that spanned 20 seasons, with league totals of 459 games and 127 goals, he was the first Australian ever to play and score in La Liga, the Premier League and Serie A.

Kevin Vincent Muscat is an Australian former association football player and the current manager of Yokohama F. Marinos. As a player, he represented the Australia national team at international level winning 46 caps and scoring 10 goals between 1994 and 2006.

John Paul Hutchinson is a football manager and former player who is the head coach for El Paso Locomotive FC in the USL Championship. He played as a central midfielder for Eastern Pride, Northern Spirit, Manly United, Chengdu Blades and Central Coast Mariners. He also captained the Central Coast Mariners. Born in Australia, he represented the Malta national team internationally.

Michael Theo is an Australian goalkeeper who is the goalkeeping coach at A-League club Western United FC.

Eugen Josip Galekovic is an Australian former professional footballer who played as a goalkeeper. He is the current goalkeeper coach for Adelaide United. 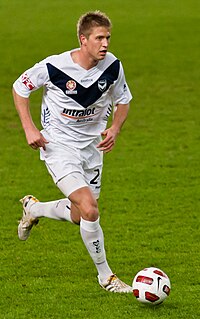 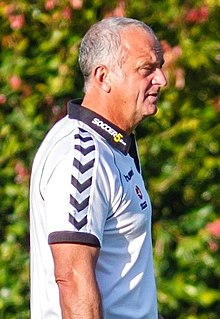 Graham James Arnold is an Australian association football manager and former player. Arnold was appointed to work as an assistant coach of the Australian national football team in 2000. After head coach Frank Farina was sacked in 2005, Arnold worked with Guus Hiddink for the 2006 FIFA World Cup campaign, in which they made the second round of the finals. After Hiddink left, he became interim coach of the Socceroos. Arnold went on to qualify Australia's U23 men's national football team for the 2008 Beijing Olympics. Arnold then went on to assist Pim Verbeek for qualification of the 2010 World Cup in South Africa. Arnold went on take the manager role at A-League club the Central Coast Mariners between 2010 and 2013, where he guided the club to a Premiership and a Championship. He is a member of the Football Federation Australia Football Hall of Fame. Arnold went on to win two Premierships, one Championship and an FFA Cup with Sydney FC. In August 2018, Arnold was appointed head coach of the Socceroos - Australia's senior men's national football team.

Brisbane Roar Football Club is an Australian professional football club based in Brisbane, Queensland and has won the domestic title on three occasions, as well as holding the longest unbeaten record of 36 league matches without defeat.

Oliver John Bozanic is an Australian football player who plays as a midfielder for Western Sydney Wanderers.

Angelos Postecoglou is an Australian association football manager and former player, who is the current manager of Scottish Premiership club Celtic.

Mehmet Duraković is an Australian football coach and former player. Born in Titograd, Yugoslavia, now Podgorica, Montenegro, he spent his playing career as a defender for several clubs in the Australian National Soccer League (NSL), with a brief stint in Malaysia with Selangor FA. Duraković made 64 appearances and scored six goals for the Australian national team.

Steven Lustica is an Australian soccer player who plays for Western United.

Mike Mulvey is an Australian-English football manager, who is currently the Technical Director of South West Queensland Thunder. He had previously been in charge of clubs in Australia, Thailand and Malaysia. 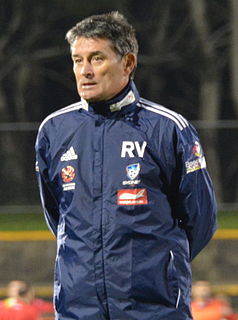 Ayesha Norrie is an Australian football (soccer) player, who currently plays for Brisbane Roar. She has previously played for Melbourne Victory and Perth Glory in the Australian W-League. She has represented Australia on the under-17 and under-20 national teams.

Angela Beard is an Australian soccer player, who currently plays for Fortuna Hjørring. She has represented Australia on the under-17, under-20 national team and Australia.