In other words, MAR holds the memory location of data that needs to be accessed. When reading from memory, data addressed by MAR is fed into the MDR (memory data register) and then used by the CPU. When writing to memory, the CPU writes data from MDR to the memory location whose address is stored in MAR. MAR, which is found inside the CPU, goes either to the RAM (Random Access Memory) or cache.

The Memory Address Register is half of a minimal interface between a microprogram and computer storage; the other half is a memory data register.

In general, MAR is a parallel load register that contains the next memory address to be manipulated. For example, the next address to be read or written. 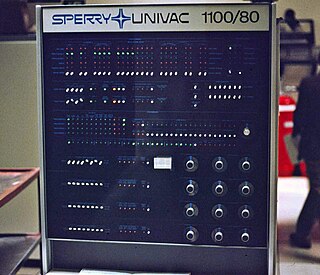 A processor register is a quickly accessible location available to a computer's central processing unit (CPU). Registers usually consist of a small amount of fast storage, although some registers have specific hardware functions, and may be read-only or write-only. In computer architecture, registers are typically addressed by mechanisms other than main memory, but may in some cases be assigned a memory address e.g. DEC PDP-10, ICT 1900. 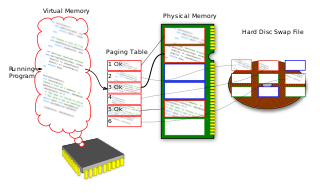 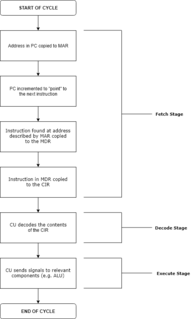 The instruction cycle is the cycle which the central processing unit (CPU) follows from boot-up until the computer has shut down in order to process instructions. It is composed of three main stages: the fetch stage, the decode stage, and the execute stage.

A memory buffer register (MBR) is the register in a computer's processor, or central processing unit, CPU, that stores the data being transferred to and from the immediate access storage. It is also known as the Memory Data Register (MDR). It contains the copy of designated memory locations specified by the memory address register. It acts as a buffer allowing the processor and memory units to act independently without being affected by minor differences in operation. A data item will be copied to the MBR ready for use at the next clock cycle, when it can be either used by the processor for reading or writing or stored in main memory after being written.

In computing, a word is the natural unit of data used by a particular processor design. A word is a fixed-sized piece of data handled as a unit by the instruction set or the hardware of the processor. The number of bits in a word is an important characteristic of any specific processor design or computer architecture.

Data is any sequence of one or more symbols given meaning by specific act(s) of interpretation.

CPU Sim is a software development environment for the simulation of simple computers. It was developed by Dale Skrien to help students understand computer architectures. With this application the user is able to simulate new or existing simple CPUs. Users can create new virtual CPUs with custom machine language instructions, which are implemented by a sequence of micro instructions. CPU Sim allows the user to edit and run assembly language programs for the CPU being simulated.