Dingsdag began his career 1990 in his hometown with DWS and was 1999 scouted by Vitesse/AGOVV. After two years in the youth side by Vitesse/AGOVV was in July 2001 promoted to the Eredivisie side of Vitesse Arnhem. He played in his five years for Vitesse Arnhem 90 games and scored three goals, before signing a contract for League rival SC Heerenveen.

Dingsdag then enjoyed a 5-years stint in Switzerland, with three seasons at FC Sion [1] and another two at Grasshoppers.

In summer 2015, Dingsdag returned to Holland to sign a two-year deal with Eerste Divisie club NAC. [2] He finished his professional career however after one year to become youth coach at NAC. [3] He joined amateur side Veensche Boys at the same time to continue playing. [4]

Jeroen Drost is a Dutch retired professional footballer, who played as a left back. 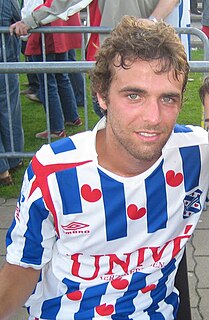 Gonzalo Manuel García García, known simply as Gonzalo or Recoba as a player, is a Spanish former professional footballer who played as an attacking midfielder, and is the manager of Dutch club FC Twente.

Genaro Rasan Snijders is a Dutch professional footballer who most recently played as a winger for DVS '33 in the Derde Divisie.

The Netherlands Football League Championship 1952–1953 was contested by 56 teams participating in four divisions. The national champion would be determined by a play-off featuring the winners of each division of the Netherlands. RCH won this year's championship by beating FC Eindhoven, Sparta Rotterdam and Vitesse Arnhem.

The 2012–13 Eredivisie was the 57th season of Eredivisie, since its establishment in 1955. It began on 10 August 2012 with the first match of the season and ended on 26 May 2013, with the last matches of the European competition and relegation play-offs.

Anouar Kali is a Moroccan football player who plays as a defensive midfielder for NAC Breda in the Dutch Eredivisie.

Tieme Klompe is a Dutch former footballer who played as a defender for Eredivisie clubs SC Heerenveen, RKC Waalwijk and FC Groningen.

During the 2013–14 season Vitesse Arnhem will participate in the Dutch Eredivisie, the KNVB Cup, and the UEFA Europa League.

The 2013–14 season was Feyenoord's 106th season of play, it marked its 58th season in the Eredivisie and its 92nd consecutive season in the top flight of Dutch football. They ended their league campaign as runners-up. They entered the KNVB Cup in the second round and reached the quarter-final. Their Europa League appearance consisted of the play-off round. It was the third straight season with manager Ronald Koeman, who did not renew his contract at the conclusion of the season.

The 2011–12 season was Feyenoord's 104th season of play, it was their 56th season in the Eredivisie and its 90th consecutive season in the highest Dutch football division. They ended their league campaign in second place, after winning ten of the last eleven games of the season. They reached the third round of the KNVB Cup. It was the first season with Ronald Koeman, who signed as manager of Feyenoord after former manager Mario Been resigned on 13 July 2011 due to a lack of trust from the squad.

The 2013–14 FC Twente season was the club's 30th in the Eredivisie since their promotion in 1984. They participated in the league, finishing third, and the KNVB Cup, where they were eliminated by Heerenveen in the second round. It was Michel Jansen's only full season as manager while Alfred Schreuder earned his coaching badges.

The 2014–15 KNVB Cup is the 97th season of the Dutch national football knockout tournament. The competition began on 27 August 2014 with the matches of Round 1 and ended with the final on 3 May 2015. The winner qualified for the group stage of the 2015–16 UEFA Europa League.

During the 2014–15 season Vitesse Arnhem will participate in the Dutch Eredivisie and the KNVB Cup. Despite being a sensation in the previous season, the club failed to qualify for any major European competition.

The 2002–03 season was Feyenoord's 47th consecutive season playing in the Eredivisie, the top division of Dutch football. Feyenoord finished 3rd in the 2002-03 Eredivisie and did qualified for the 2003-04 UEFA Cup. In the 2002-03 KNVB Cup they lost the final to FC Utrecht. In the 2002–03 UEFA Champions League Feyenoord was eliminated after the Group Stage.

The 2000–01 season is Feyenoord's 93rd season of play, the club's 45th season in the Eredivisie and its 79th consecutive season in the top flight of Dutch football. It is the first season with new manager Bert van Marwijk who came over from Fortuna Sittard. Feyenoord entered the 2000–01 KNVB Cup in the third round and the 2000–01 UEFA Cup in the 1st round after being eliminated bij Sturm Graz in the 3rd Qualifying round of the UEFA Champions League.