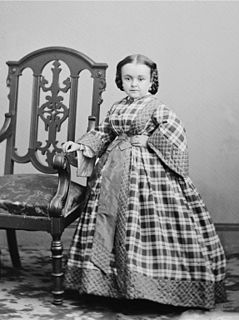 Mercy Lavinia Warren Stratton was an American proportionate dwarf, who was a circus performer and the wife of General Tom Thumb. She was known for her appearance in one silent film, The Lilliputians Courtship (1915).

Middleborough Center is a census-designated place (CDP) in the town of Middleborough in Plymouth County, Massachusetts, United States. The population was 7,319 at the 2010 census.

The Taunton River, is a river in southeastern Massachusetts in the United States. It arises from the confluence of the Town River and Matfield River, in the town of Bridgewater. From there it meanders through the towns of Halifax, Middleborough and Raynham, through the city of Taunton for which it is named, the towns of Berkley, Dighton, Somerset, and the Assonet section of Freetown, to Fall River where it joins Mount Hope Bay, an arm of Narragansett Bay. 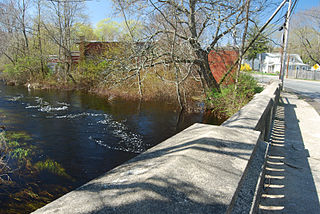 The Nemasket or Namasket River is a small river in southeastern Massachusetts. It flows north 11.2 miles (18.0 km) from Assawompset Pond in Lakeville and through Middleborough where it empties into the Taunton River. 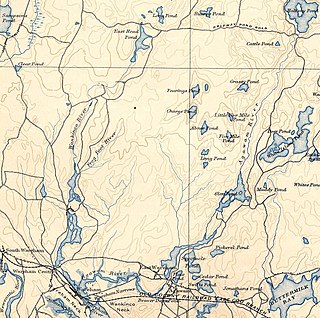 The Wankinco River is a 7.3-mile-long (11.7 km) river in eastern Massachusetts, United States. It is a tributary of the Wareham River, which drains into Buzzards Bay.

The Eel River is a 3.9-mile (6.3 km) river mostly in the village of Chiltonville in Plymouth, Massachusetts. Its headwaters are springs and small ponds above Russell Millpond. Its watershed encompasses approximately 15 square miles (39 km2). It flows along Plimoth Plantation and Plymouth Beach for about ½ mile before emptying into Plymouth Harbor between the beach and Manters Point.

Plymouth South High School, also known as Plymouth South, or PSHS, is a public high school located in Plymouth, Massachusetts. Its students are residents of the town of Plymouth. Plymouth South is one of two high schools in Plymouth, the other being Plymouth North High School. Plymouth South is located near the Long Pond neighborhood of Plymouth, west of Route 3 and The Pinehills development, and also adjacent to nearby Myles Standish State Forest, which is the biggest publicly owned recreation area in the South Shore region of Massachusetts, and also one of the biggest in the state. The school colors are Black, Teal and White and the school's teams are the Panthers.

The Tom Thumb House is a historic house at 351 Plymouth Street in Middleborough, Massachusetts. The 2​1⁄2 story wood frame house was built in the 1870s as a summer home for the dwarf entertainer Charles Stratton, best known by his stage name, General Tom Thumb. It has Second Empire architecture, including a mansard roof, paired brackets in the cornice, and paired columns supporting the porch. The interior was built to meet the needs of the 3-foot-4-inch (102 cm) Stratton and his wife Lavinia, who was also a proportionate dwarf (midget,) however, few of its miniaturized features have survived.

Huldah Pierce Warren (Bump) Newell, better known as Minnie Warren, who was a proportionate dwarf and an entertainer associated with P. T. Barnum. Her sister Lavinia Warren was married to General Tom Thumb. They were very well known in 1860s America and their meeting with Abraham Lincoln was covered in the press.

Count Primo Magri (1849–1920) and Count Rosebud were the stage names of a 19th-century Italian dwarf who married Lavinia Warren, the widow of General Tom Thumb on Easter Monday, April 6, 1885 at the Church of the Holy Trinity in New York City.

Tom Thumb House may refer to: 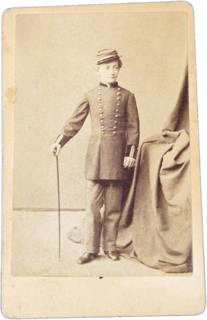 The Pio Cristiano Museum is one of the Vatican Museums. It houses various works of Christian antiquity.

WRRS is an FM radio station licensed to Middleborough Center, Massachusetts and is owned by Talking Information Center, Incorporated. WRRS operates with 400 watts on 88.5 MHz. It broadcasts programming from the Talking Information Center, a radio reading service for blind people normally heard on F.M. subcarriers. WRRS was granted its callsign on October 29, 2010. It began broadcasting in 2012. WRRS went silent as of December 28, 2016, but returned to the air December 22, 2017. 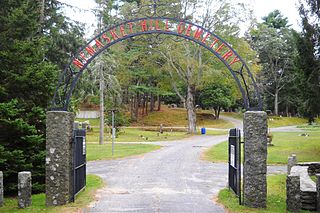 Nemasket Hill Cemetery is a cemetery located in Middleborough, Massachusetts. It was set aside as a burial ground in 1662, and is the oldest in Middleborough. The oldest engraved headstone here is that of Elizabeth Vaughan, who died on June 24, 1693.

The Pioneer Log Cabin Museum is a historical log cabin located in Cassopolis, Michigan, built in 1923. It was originally conceived as a temporary structure for the Pioneer Day Picnic by Charles Harmon, then Secretary of the Cass County Pioneer Society. 146 logs of various species were hauled on April 4, 1923, and construction began on May 23. Children were given the day off of school, and the Cassopolis Military band led a parade down South Broadway Street to Stone Lake, where the cabin was to be sited. A crew of forty six built the cabin. Each log had a serial number painted on the end which corresponded to the donor list. The cabin was dedicated on Pioneer Day: June 20, 1923.

Gull Island is a small island located just off the southeast coast of Penikese Island. It is part of the Elizabeth Islands and is entirely part of the town of Gosnold in Dukes County, Massachusetts. It was at one point used as a naval bomb area for aviators. Currently, it is uninhabited.