Midnight Life is a 1928 silent mystery film produced by independent Gotham Company and distributed by B movie studios Lumas Films. The film is based on a novel, The Spider's Web, by Reginald Wright Kauffman. It was directed by Scott R. Dunlap and stars Francis X. Bushman and Gertrude Olmstead. This film is preserved at the Library of Congress. [1] [2] [3] [4]

Empty Hands is a 1924 American silent romantic drama film directed by Victor Fleming, and starring Jack Holt and Norma Shearer. The film was produced by the Famous Players-Lasky and distributed by Paramount Pictures.

Green Grass Widows is a 1928 American silent comedy film directed by Alfred Raboch, and produced and released by Tiffany-Stahl Productions. The film was directed by the Alfred Raboch and starred golf player Walter Hagen. The film co-stars Hedda Hopper and Gertrude Olmstead. 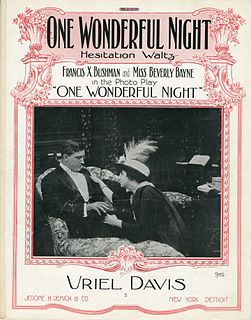 One Wonderful Night is a lost 1914 American silent mystery drama film starring Francis X. Bushman and Beverly Bayne, at the time a romantic screen couple. It was produced by the Chicago-based Essanay Studios.

Dame Chance is a surviving 1926 American silent romantic drama film produced and released by independent companies David Hartford Productions and American Cinema Associates respectively. The stars are Julanne Johnston, Robert Frazer, Gertrude Astor, and Mary Carr. Copies of the film are held at the Library of Congress and the BFI British Film Institute.

Midnight Lovers is a 1926 American silent romantic war comedy film directed by John Francis Dillon and distributed by First National Pictures. It starred Lewis Stone and Anna Q. Nilsson. It was based on the play Collusion by J. E. Harold Terry.

Modern Marriage is a 1923 American silent crime drama film directed by Lawrence C. Windom and Victor Heerman. It starred Francis X. Bushman and Beverly Bayne in one of their last appearances together.

The Marriage Clause is a 1926 silent film drama directed by Lois Weber and starring Francis X. Bushman and Billie Dove. It was produced and released by Universal Pictures. The film marked a return to directing for Weber, who had taken a break for a few years. 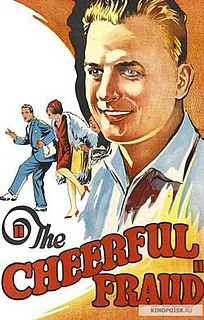 The Cheerful Fraud is a 1927 American silent comedy film directed by William A. Seiter and starring Reginald Denny, Gertrude Olmstead, and Otis Harlan. It was produced and distributed by Universal Pictures. It is based on a 1925 novel of the same title by British writer Kenneth Robert Gordon Browne.

A Million a Minute is a lost 1916 American silent drama film directed by John W. Noble and starring Francis X. Bushman, Beverly Bayne and Robert Cummings. The film is based on a novel, A Million a Minute: A Romance of Modern New York and Paris by Robert Aitken. John W. Noble, a regular director for Metro releases, did directing honors.