Mikael Wulff (born 2 September 1972) [1] is a Danish comedian, who appeared in television shows such as Dolph og Wulff, [2] and is co-illustrator of the Wulffmorgenthaler comic strips, which he produces together with Anders Morgenthaler. [3]

Fejø is a Danish island north of Lolland. It covers an area of 16 km2 (6.2 sq mi) and has 611 permanent inhabitants. Its population expands in Summer since many Danes have summerhouses and there is an influx of other tourists. Fejø has two villages: Vesterby and Østerby, connected by a single main road. Fejø has two main harbors, Vesterbyhavn and Dybvighavn. The island has a cafe, restaurant, shop, retirement home, church, primary school, mill, and a resident doctor. It has a windmill which was restored and started grinding corn for the first time in decades in June 2013.

The Royal School of Library and Information Science is a school under the University of Copenhagen that provides higher education in the field of library and information science. It has now merged with another department to Department of Communication. It is based in Copenhagen, Denmark. It is a member of iSchools, a consortium directed to understanding the role of information in nature and human culture. There has also been a location in Aalborg, however this campus was shut down in the summer of 2017. 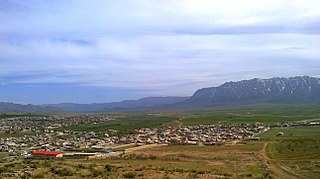 Buin Miandasht is a city and capital of Central District, in Buin Miandasht County, Isfahan Province, Iran. At the 2006 census, its population was 9,933, in 2,537 families.

Aalborg Chang is a Danish association football club based in the city of Aalborg, that competes in the DBU Jutland Series 1, one of the sixth tiers of the Danish football league system, and the second tier of the regional DBU Jutland football association, to which it belongs. It was known as FC Nordjylland from 2001 to 2004. The club, founded in 1912, reached the 1955 Danish Cup final, and has played a number of seasons in the Danish divisions, most recently the 2003–04 Danish 1st Division season.

Jesper Thygesen is a Danish football director, commentator, and former player. From 1991 to 2005, Thygesen played 296 games and scored 45 goals in the Danish Superliga. He played in the midfielder position, and represented Ikast FS, Silkeborg IF, Brøndby IF, and Randers FC, winning the 1998 Superliga and 1998 Danish Cup with Brøndby. He played 27 national youth team games, and represented the Denmark League XI national football team on seven occasions in 1997 and 1998.

The award system of Denmark, and especially the regulations for who is allowed to wear which medals, is one of great variation. The current honour-system has been created one step at a time since the 16th century. The system consists of royal orders and medals, official/governmental medals and some few private medals that have been approved by the monarch.

Vestfrost or Vestfrost Household is a manufacturer of major appliance. The Company is based in Esbjerg, Denmark. Since 1963 they have sold more than 12 million refrigerators and freezers. In 2008 Vestfrost was bought by the Turkish appliance manufacturer Vestel. In 2006 they had more than 300 employees in Esbjerg. In 2007 they had DKK 918,000,000 in revenue. Today most of the manufacturing is localised in Turkey and Slovakia. Their product range include refrigerators, freezers, washing machines, wine cellular, ovens and hobs.

The CCB is a combat helmet of Brazilian origin in the shape of the U.S PASGT helmet, issued to the Brazilian Armed Forces in two versions, polymer and kevlar.

Battle of Jutland is the football rivalry between two of the oldest clubs in Danish football history, Aalborg BK and Aarhus GF.

Kuopiorock is a Finnish two- to three-day rock music festival held annually in Väinölänniemi, Kuopio, at the turn of July and August. The first event was held in 2003. In 2012, the event celebrated its 10th anniversary and the festival was held on 27–28 July.