Dolph also known as Dolph the Fascist Hippo is a fictional character appearing in the Danish television show Dolph og Wulff med venner (Dolph and Wulff with friends), played by Danish actor Jonas Schmidt, who is otherwise known in Denmark from another popular comedy series, P.I.S. , and a long-running series of Toyota commercials.

Dolph is a large, fascist, baby-blue hippopotamus usually appearing armed with a baseball bat. He first appeared as a minor character in the Danish cartoon strip Wulffmorgenthaler , [1] which appears daily in the newspaper Politiken , though he had already been created for the yet unaired TV-show at that point, and a very early version had appeared in the music video for the song "Oak Tree Girl" by Powersolo in early 2004, directed by Anders Morgenthaler. In 2005, the TV station DR2 aired a show based on the cartoon. Four characters appeared in the show, the two authors of the strip (Mikael Wulff and Anders Morgenthaler) plus two of its minor characters; Dolph and Margit, a feminist and politically correct squirrel. As could be expected, Dolph had a very strained relationship with the show's other characters. The show ran for 10 episodes. Dolph is named after Swedish actor Dolph Lundgren.

It quickly turned out that Dolph was the most popular character in the show, and DR2 announced that Dolph would return in 2005. On 28 October 2005, Dolph returned to the screen in a new show co-starring with Mikael Wulff but without both Margit the Squirrel and Anders Morgenthaler. The show had also been renamed from Wulffmorgenthaler to Dolph & Wulff . The show ran for 10 episodes. The next season, now in the format of a talkshow, Dolph og Wullf med venner, began in March 2006. The character has, since that season, been used sparingly, having only reappeared on rare occasions.

Dolph suffers from megalomania, uncontrolled rage, paranoia, aggression, and xenophobia, in the literal sense of the word xenophobia, whenever he sees a black person, he starts screaming and attempts to hide; at one time claiming that a single black male was actually an army of tribeleaders from Botswana, as an excuse for his going into hiding. He is a racist, but on closer inspection, he in fact hates virtually everybody else ("most German people" is a notable exception, highlighting his own ignorance of history). He often refers to himself in the third-person singular. He constantly tries to convince the world that it should accept him as its sole ruler, but is frustrated by his lack of success. Although a Fascist, Dolph has never made any references to either Jews or the Holocaust and is apparently not a declared anti-Semite. Nor does he use any Nazi or Fascist symbols, although he clearly admires Hitler. On the other hand, he has no respect for virtually anyone else, and regrets the abolition of apartheid. He is a firm believer in military dictatorship and nuclear power - preferably in the form of nuclear weapons. He is a firm opposer of democracy. He has - unsuccessfully - attempted to blow up the Danish parliament, Christiansborg . This plan went foul when his accomplice forgot to bring the bomb.

Dolph constantly claims that he has received training as both a ninja and by the special forces, and that he is an expert in stealth techniques. He has - so far - provided little proof for any of these stories. The fact that he's incredibly obese seems to point to the contrary. His all-important hero is a Danish elite soldier, B.S. Christiansen , who appeared in episode eight of Dolph & Wulff. Dolph has also appeared in a fight-AIDS campaign , stating that "AIDS is a weak disease, it is totally unfit for the society of the future (...) Had it been a strong disease it would go for the strong members of society". Dolph has become a cult figure and the show has many fans. The creator Mikael Wulff has in the past expressed dissatisfaction with some of the fans who tend to take Dolph far too seriously and who are actually agreeing with him, seemingly not realising that Dolph is supposed to make fun of racists.

Dolph has found a few persons worthy to contribute to what he refers to as "the society of the future". Those include Steven Seagal, Chuck "Texas Ranger" Norris, Jean-Claude Van Damme, Danish elite soldier B.S. Christiansen, singer Helmut Lotti (he insists that Helmut Lotti can only be German, while he is actually Belgian), Arnold Schwarzenegger, Danish football player Stig Tøfting, Prince Joachim and most German people. A few members of his list of hopeless cases include baby seals, hippies, male hairdressers, and former Danish Prime Minister Anders Fogh Rasmussen. Despite Dolph's fondness of his baseball bat, which he believes can solve virtually every problem, the Wulffmorgenthaler show showed no real violence. Dolph & Wulff is more violent, although no real violence is shown. In Dolph & Wulff , episode 1, Dolph apparently kills a character called "Mogens, the naughty kitty", in order to release himself from a contract bound to by ninja honour. In Episode 2, Dolph creates a diversion to free Mikael Wulff who is held captive by a crazy farmer who wants to kill him with a chainsaw. This is accomplished when he empties a can of acid in a barrel containing the farmer's pet pig. In both examples, no real violence is seen.

He often claims to hate Wulff, referring to him as being a hobbit, because of his height, but he actually seems to care about Wulff, saving him on several occasions, and, after a fight where Dolph was essentially fired, he gave Wulff a "SWAT Team startkit", consisting of a moustache, in an attempt to apologise.

Although Dolph adamantly denies it, he only eats salad and certain plant seeds. How he has managed become obese on this diet is unknown. His stomach is highly intolerant to pork. He was seen eating pork in episode 3, which almost instantly caused him to have extremely severe diarrhoea.

Dolph fell into coma and was shortly clinically dead following a failed plastic operation but was revived by his hero, B.S. Christiansen. After his return to life, Dolph joined B.S. Christiansen on a secret mission with his squad of special elite soldiers, leaving Wullf without any career possibilities at all, not counting Wulff's idea for a Crocodile Dundee style show, mainly about himself wearing a leather hat. Dolph returned in the next episode, since his mission was accomplished, with 9000 baby seals dead.

A running gag with Dolph was that despite his fascist exterior and claiming a huge love of all actionmovies and war, in some cases, such as when he is afraid, woozy or thinks that he is not being watched, he will express love of Meg Ryan, and especially Sleepless in Seattle, of which he hopes that they will make a sequel.

The actor inside Dolph, Jonas Schmidt, co-starred with Dolph's great hero B.S. Christiansen in the Danish movie In China They Eat Dogs . Both played police officers.

In the video game Hitman: Blood Money , Dolph makes a cameo in a newspaper after the "Curtains Down" level. It reads "Hippo bleu est invisible, personne peut le voir. Partir furtivement comme un ninja japonais. Vous etes tous ouverure d'anus de 100% Oui Monsieur!" Translated into English it says something to the effect of: "Blue Hippopotamus is invisible, nobody can see him. He leaves stealthy like a Japanese ninja. You are all 100% assholes! Yes Sir!" Dolph's eyes appear alongside the quote; also, in the first level, which is featured in the demo, a baseball bat can be found in the target's office, bearing the signature "Dolph" on it.

The Everyday Happenings of Weebl is a Flash cartoon series created by Jonti Picking (Weebl) and co-scripted by Chris Vick (Skoo). 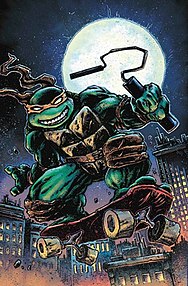 Michelangelo, nickname Mike or Mikey, is a fictional character and one of the four main characters of the Teenage Mutant Ninja Turtles comics and all related media.

Anders Bircow, is a Danish actor and comedian. He is best known as a member of the comedy act Linie 3.

Garfield and Friends is an American animated television series based on the comic strip Garfield by Jim Davis and ran on CBS Saturday mornings from September 17, 1988 to December 10, 1994, with reruns airing until October 7, 1995. Seven seasons of the series were produced.

Teenage Mutant Ninja Turtles is an American animated television series produced by the studio Murakami-Wolf-Swenson and the French company IDDH. The pilot was shown during the week of December 28, 1987 in syndication as a five-part miniseries and the show began its official run on October 1, 1988. Since then the show and franchise has become a worldwide phenomenon. The series featured the Teenage Mutant Ninja Turtles characters, created by Kevin Eastman and Peter Laird. The property was changed considerably from the darker-toned comic, to make it more suitable for children and the family. 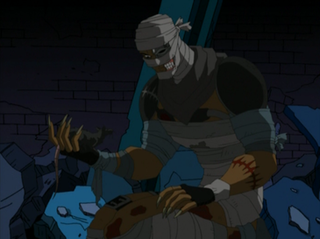 The Rat King is a fictional character from the Teenage Mutant Ninja Turtles multimedia franchise. The character was created by Jim Lawson and first appeared in the comic Tales of the Teenage Mutant Ninja Turtles #4 written by Jim Lawson and has made various appearances since, in the comic books and other media, such as animated series' and video games.

Planet Sketch is a British-Canadian animated television series produced by Aardman Animations and Decode Entertainment. The show first aired on CITV from September 10, 2005, and later began airing on Teletoon starting on November 19, 2005.

Rocco or Rocko is both a given name and a surname. Notable people with the name include:

Rasmus Bjerg is a Danish actor.

Anders Frandsen was a Danish musician, singer, actor and TV presenter. He was born in Copenhagen.

Donald Fauntleroy Duck is a cartoon character created in 1934 at Walt Disney Productions. Donald is an anthropomorphic white duck with a yellow-orange bill, legs, and feet. He typically wears a sailor shirt and cap with a bow tie. Donald is most famous for his semi-intelligible speech and his mischievous and temperamental personality. Along with his friend Mickey Mouse, Donald is one of the most popular Disney characters and was included in TV Guide's list of the 50 greatest cartoon characters of all time in 2002. He has appeared in more films than any other Disney character, and is the most published comic book character in the world outside of the superhero genre.

Rocco the Beaver is a speaking beaver puppet in the Danish TV-series Dolph & Wulff med Venner. The series are a spin-off from the show Wulffmorgenthaler and hosted by Mikael Wulff and Dolph. According to Mikael Wulff, Rocco is inspired by the Italian male pornographic actor Rocco Siffredi. Rocco is voiced by Jonas Schmidt and mainly speaks English, though he understands Danish and occasionally also utilizes Danish words.

Stig Kristensen, is a Danish cartoonist and illustrator, and author of the Danish comic strip "Stig's Stribe" which currently is published in the Danish newspaper, Fyens Stiftstidende. Stig's Stribe has appeared on the paper's back page since November 2007.

Mikael Wulff is a Danish comedian, who appeared in television shows such as Dolph og Wulff, and is co-illustrator of the Wulffmorgenthaler comic strips, which he produces together with Anders Morgenthaler.

Christian Geo Heltboe is a Danish comedian. He is best known under his middle name Geo.

Anders Bleg Christiansen is a Danish footballer who plays for Allsvenskan club Malmö FF as a midfielder. He used to play with the nickname 'AC' on the back of his shirt.