Helmut Lotti (born Helmut Barthold Johannes Alma Lotigiers; 22 October 1969), is a Belgian tenor [1] and singer-songwriter. Lotti performs in several styles and languages. Once an Elvis impersonator, he has sung African and Latino and Jewish music hit records, and he crossed over into classical music in the 1990s. [1]

The son of Luc and Rita (née Lagrou), Helmut Barthold Johannes Alma Lotigiers was born in Ghent, Belgium, and began his singing career with a visual and singing style in an obvious imitation of Elvis Presley, [2] and was described as "De Nieuwe Elvis" (in Dutch) or "The New Elvis". His first two albums were Vlaamse Nachten ("Flemish Nights", 1990) and Alles Wat Ik Voel ("All That I Feel", 1992). After a few more albums, he changed direction in 1995 with the first of what became a long series of "Helmut Lotti Goes Classic" albums, which proved to increase his popularity. Since 2000 he has also made successful recordings in traditional Latino, African and Russian-style music.

Lotti does volunteer work as an ambassador for UNICEF. Lotti took part in the 0110 concerts against racism, organised by Tom Barman. [4]

He was married 3 times, divorced 3 times and has 1 daughter. Lotti was diagnosed with autism as an adult. [5] [6] 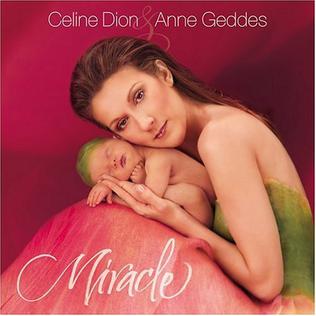 Miracle is the ninth English-language and twenty-first studio album by Canadian singer Celine Dion, released by Columbia on 11 October 2004. It is a concept album credited to Dion and Australian photographer Anne Geddes. The songs were produced by David Foster. Miracle topped the chart in Canada and Belgium Wallonia, and reached top five in the United States, United Kingdom, France and the Netherlands. It was certified Platinum in the US, and Gold in various countries.

Michel Charles Sardou is a French singer and occasional actor. 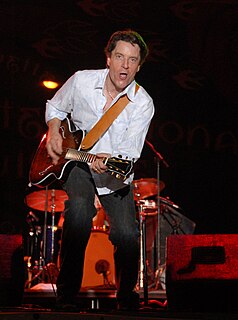 Francis Christian Cabrel is a French singer-songwriter, composer and guitarist. Considered one of the most influential French musical artists of all time, he has released a number of albums falling mostly within the realm of folk, with occasional forays into blues or country. Several of his songs, such as "L'encre de tes yeux", "Je l'aime à mourir", "Le chêne liège" and "La corrida", have become enduring favourites in French music. Since the start of his career, Cabrel has sold over 25 million albums.

Élie Yaffa, better known under his stage name Booba, is a French rapper. After a brief stint as a break dancer in the early 1990s, Booba partnered with his friend Ali to form Lunatic. The duo released a critically acclaimed album in 2000 but disbanded in 2003. Booba has since embarked on a successful solo career, selling more than 10 million discs over his career and becoming the most legally downloaded artist in French history. Booba is praised for the quality of his flow and beats but often criticized because of the controversial nature of his lyrics. He has also established the rap label Tallac Records, and developed a line of jewellery. 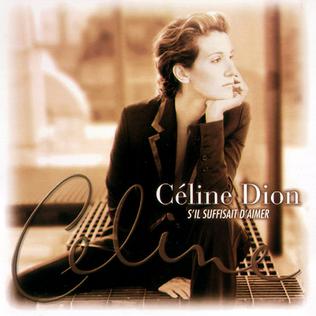 S'il suffisait d'aimer is the sixteenth studio album by Canadian singer Celine Dion, and her eleventh French-language studio album. It was released by Columbia Records on 7 September 1998. The album was mainly written and produced by French singer-songwriter, Jean-Jacques Goldman. It garnered favorable reviews from music critics and became the second best-selling French-language album of all time, after Dion's own D'eux (1995). It includes three hit singles: "Zora sourit", "S'il suffisait d'aimer" and "On ne change pas". S'il suffisait d'aimer won the Juno Award for Best Selling Francophone Album of the Year. 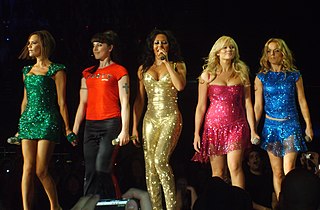 The Spice Girls, an English girl group, have released three studio albums, one compilation album, 11 singles and 18 music videos. Formed in 1994, the group was made up of singers Geri Halliwell, Emma Bunton, Mel B, Melanie C and Victoria Beckham. 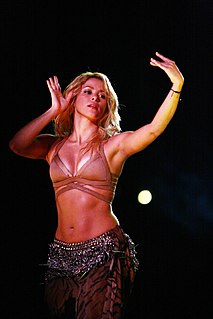 Colombian singer and songwriter Shakira has released 11 studio albums, five live albums, two compilation albums, 68 singles and 62 music videos. With estimated sales of 80 million albums worldwide as of 2014 according to Billboard, she is the highest-selling Colombian artist and the best-selling female Latin artist of all time. She is the only South American artist to peak at number one on the Australian Singles Chart, the UK Singles Chart, and the US Billboard Hot 100. Her singles "Hips Don't Lie" and "Waka Waka ", have achieved sales in excess of five million units, becoming some of the best-selling singles worldwide. 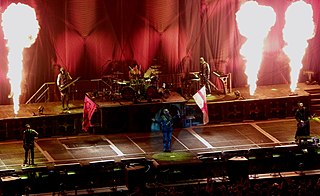 Au cœur du stade is the fourth live album by Canadian singer Celine Dion, released by Columbia Records on 27 August 1999. It was recorded during two sold-out concerts at the Stade de France in Paris in June 1999. Dion made music history with these two concerts, becoming the first artist in history to perform for more than 90,000 spectators, with a grand total of 180,000 ticketholders over the two nights. The album features primarily French-language songs, mainly from S'il suffisait d'aimer (1998), but also includes "My Heart Will Go On" and "Let's Talk About Love". Au cœur du stade topped the charts in Francophone countries and was certified double platinum in France, platinum in Belgium and Switzerland and gold in Canada. 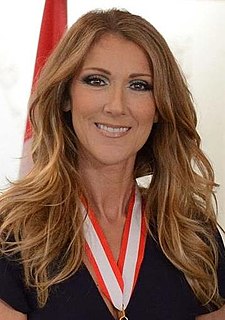 Canadian singer Celine Dion has released 27 studio albums, seven live albums, 19 compilation albums, and 25 box sets. Recognized as the "Priestess of Pop", she has sold 53.2 million albums in the United States according to Neilsen SoundScan, making her the second best-selling female artists in the country since Nielsen began tracking sales in 1991. In 2003, Dion was honored by International Federation of the Phonographic Industry for selling 50 million albums in Europe. Guinness World Records recognises her as the Top Selling Album Act in Europe with 33 million certified album sales since 1996. Billboard ranked her as the second best-selling female album artist of the 2000s Decade in the United States with 17.3 million sold via Soundscan. In 2008, Dion was recognized as the Best-selling International Artist in South Africa. Billboard ranked Dion as the 6th Greatest Billboard 200 female solo artist of all time & the 8th Greatest female solo artist of all time. Dion is also the best-selling Canadian artist of all time and the best-selling artist in the Nielsen SoundScan era in Canada. 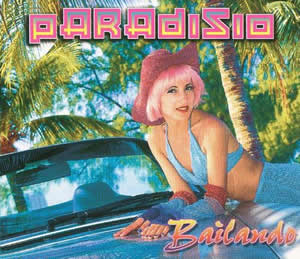 "Bailando" is a song by Belgian group Paradisio. It was released in May 1996 as the lead single from their debut album, Paradisio. The song is produced by Patrick Samoy and Luc Rigaux and reached number-one in Italy, Denmark, Norway, Finland and Sweden. It peaked at number 2 in Belgium. In Sweden, it was the best selling single by being triple platinum. The song was a hit in most countries across Europe during the summer of 1996-1997. 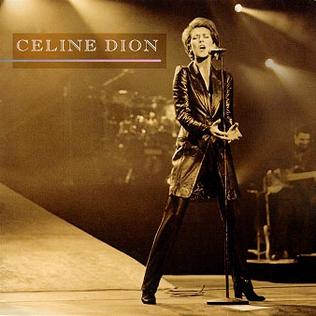 Live à Paris is the third live album by Canadian singer Celine Dion, released on 21 October 1996 by Columbia Records. It features primarily French-language songs, mainly from D'eux (1995), but also includes "The Power of Love", "River Deep, Mountain High" and a studio version of "To Love You More" as a bonus track. Live à Paris topped the charts in France, Belgium, Switzerland and Quebec, and was certified 2× Platinum by the International Federation of the Phonographic Industry, denoting sales of over two million copies in Europe.

French singer Patricia Kaas has released ten studio albums, seven live albums, three compilation albums, and fifty-three singles. Kaas' first hit, "Mademoiselle chante le blues" was released in November 1987. It peaked at number seven on the French Singles Chart in January 1988 and was certified Silver. The next single, "D'Allemagne" was issued in May 1988 and reached number eleven in July 1988. Both songs were included on Kaas' debut album, Mademoiselle chante... released in November 1988. The album peaked at number two in France in February 1989 and stayed on the chart until 1991. Mademoiselle chante... was certified Diamond in France and has sold 1.6 million copies in this country alone. It was also certified 2× Platinum in Switzerland and Gold in Canada. The album also peaked at number thirteen on the European Top 100 Albums chart. The third single, "Mon mec à moi" was issued in November 1988 and reached number five in France in February 1989. It was also certified Silver. Released as the next single in May 1989, "Elle voulait jouer cabaret" peaked at number seventeen in France in June 1989. The last single, "Quand Jimmy dit" was issued in October 1989. It reached number ten in France the next month and was also certified Silver.

Ensemble is the second studio album by Kendji Girac. It was released on 30 October 2015 with "Me Quemo" released as the debut single from the album. The album has surpassed sales of a million of copies as of 2019 and was certified diamond in France and 2× platinum on Belgian francophone charts.

Aya Coco Danioko, known by her stage name Aya Nakamura, is a French-Malian pop singer. She is best known for her hit song "Djadja".

Wikimedia Commons has media related to Helmut Lotti .
This page is based on this Wikipedia article
Text is available under the CC BY-SA 4.0 license; additional terms may apply.
Images, videos and audio are available under their respective licenses.