In linguistics, grammatical person is the grammatical distinction between deictic references to participant(s) in an event; typically the distinction is between the speaker (first person), the addressee (second person), and others (third person). A language's set of personal pronouns are defined by grammatical person, but other pronouns would not. First person includes the speaker (English: I, we, me, and us), second person is the person or people spoken to (English: you), and third person includes all that are not listed above (English: he, she, it, they, him, her, them). [1] It also frequently affects verbs, and sometimes nouns or possessive relationships.

Some other languages use different classifying systems, especially in the plural pronouns. One frequently found difference not present in most Indo-European languages is a contrast between inclusive and exclusive "we": a distinction of first-person plural pronouns between including or excluding the addressee. [2]

Many languages express person with different morphemes in order to distinguish degrees of formality and informality. A simple honorific system common among European languages is the T–V distinction. Some other languages have much more elaborate systems of formality that go well beyond the T–V distinction, and use many different pronouns and verb forms that express the speaker's relationship with the people they are addressing. Many Malayo-Polynesian languages, such as Javanese and Balinese, are well known for their complex systems of honorifics; Japanese, [3] Korean, [4] and Chinese also have similar systems to a lesser extent.

In many languages, the verb takes a form dependent on the person of the subject and whether it is singular or plural. In English, this happens with the verb to be as follows:

Other verbs in English take the suffix -s to mark the present tense third person singular, excluding singular 'they'.

In many languages, such as French, the verb in any given tense takes a different suffix for any of the various combinations of person and number of the subject.

The grammar of some languages divide the semantic space into more than three persons. The extra categories may be termed fourth person, fifth person, etc. Such terms are not absolute but can refer depending on context to any of several phenomena.

The term fourth person is also sometimes used for the category of indefinite or generic referents, which work like one in English phrases such as "one should be prepared" or people in people say that..., when the grammar treats them differently from ordinary third-person forms.[ citation needed ] The so-called "zero person" [6] [7] in Finnish and related languages, in addition to passive voice may serve to leave the subject-referent open. Zero person subjects are sometimes translated as "one," but the problem with that is that English language constructions involving one, e.g. "One hopes that will not happen," are rare[ citation needed ] and could be considered expressive of an overly academic tone to the majority of people, while Finnish sentences like "Ei saa koskettaa" ("Not allowed to touch") are recognizable to and used by young children in both languages.

In linguistics and grammar, a pronoun is a word or a group of words that one may substitute for a noun or noun phrase.

In linguistics, grammatical number is a grammatical category of nouns, pronouns, adjectives and verb agreement that expresses count distinctions. English and other languages present number categories of singular or plural, both of which are cited by using the hash sign (#) or by the numero signs "No." and "Nos." respectively. Some languages also have a dual, trial and paucal number or other arrangements. 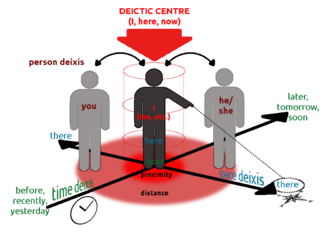 The T–V distinction is the contextual use of different pronouns that exists in some languages and serves to convey formality or familiarity. Its name comes from the Latin pronouns tu and vos. The distinction takes a number of forms and indicates varying levels of politeness, familiarity, courtesy, age or even insult toward the addressee. The field that studies and describes this phenomenon is sociolinguistics.

The imperative mood is a grammatical mood that forms a command or request.

Animacy is a grammatical and semantic feature, existing in some languages, expressing how sentient or alive the referent of a noun is. Widely expressed, animacy is one of the most elementary principles in languages around the globe and is a distinction acquired as early as six months of age.

In Modern English, they is a third-person pronoun relating to a grammatical subject.

In linguistics, an impersonal verb is one that has no determinate subject. For example, in the sentence "It rains", rain is an impersonal verb and the pronoun it does not refer to anything. In many languages the verb takes a third person singular inflection and often appears with an expletive subject. In the active voice, impersonal verbs can be used to express operation of nature, mental distress, and acts with no reference to the doer. Impersonal verbs are also called weather verbs because they frequently appear in the context of weather description. Also, indefinite pronouns may be called "impersonal", as they refer to an unknown person, like one or someone, and there is overlap between the use of the two.

Korean pronouns pose some difficulty to speakers of English due to their complexity. The Korean language makes extensive use of speech levels and honorifics in its grammar, and Korean pronouns also change depending on the social distinction between the speaker and the person or persons spoken to.

In linguistics, agreement or concord occurs when a word changes form depending on the other words to which it relates. It is an instance of inflection, and usually involves making the value of some grammatical category "agree" between varied words or parts of the sentence.

The Ojibwe language is an Algonquian American Indian language spoken throughout the Great Lakes region and westward onto the northern plains. It is one of the largest American Indian languages north of Mexico in terms of number of speakers, and exhibits a large number of divergent dialects. For the most part, this article describes the Minnesota variety of the Southwestern dialect. The orthography used is the Fiero Double-Vowel System.

The English pronouns form a relatively small category of words in Modern English whose primary semantic function is that of a pro-form for a noun phrase. Traditional grammars consider them to be a distinct part of speech, while most modern grammars see them as a subcategory of noun, contrasting with common and proper nouns. Still others see them as a subcategory of determiner. In this article, they are treated as a subtype of the noun category.

In linguistics, an honorific is a grammatical or morphosyntactic form that encodes the relative social status of the participants of the conversation. Distinct from honorific titles, linguistic honorifics convey formality FORM, social distance, politeness POL, humility HBL, deference, or respect through the choice of an alternate form such as an affix, clitic, grammatical case, change in person or number, or an entirely different lexical item. A key feature of an honorific system is that one can convey the same message in both honorific and familiar forms—i.e., it is possible to say something like "The soup is hot" in a way that confers honor or deference on one of the participants of the conversation.

This article deals with the grammar of the Udmurt language.

The T–V distinction is a contrast, within one language, between various forms of addressing one's conversation partner or partners. This may be specialized for varying levels of politeness, social distance, courtesy, familiarity, age or insult toward the addressee. The T–V distinction occurs in a number of world's languages.

Look up grammatical person in Wiktionary, the free dictionary.
This page is based on this Wikipedia article
Text is available under the CC BY-SA 4.0 license; additional terms may apply.
Images, videos and audio are available under their respective licenses.