The name Minneapolis Millers has been associated with a variety of professional minor league teams. The original Millers date back to 1884 when the Northwestern League was formed. This league failed and the Western League replaced it, absorbing some of the old teams. According to Stew Thornley, this team folded in 1891 due to financial problems. In 1894, another team calling itself the Millers was formed when Ban Johnson and Charles Comiskey revived the Western League in hopes of making it a second major league. The Millers continued to play in the Western League through 1900, when the name was changed to the American League to give it more of a national image. Following the 1900 season, several cities were abandoned for bigger markets in cities recently vacated by the National League, including Minneapolis. Some teams were transferred, as was the case of the Kansas City franchise to become the Washington Nationals (Senators). However, some of the teams were just left out in the dark. It is unclear which of these two paths the Millers took, but most evidence seems to point toward abandonment, not a transfer to Baltimore, especially given that no player for the 1900 Millers played for the 1901 Orioles.

Several teams went by the nickname Millers, but the most prominent of these was the team in the American Association from 1902 to 1960. The Millers won four Association pennants during the 1910–23 tenure of "Pongo Joe" Cantillon, then were managed from 1924–31 by another legend, Michael Joseph Kelley, one of the great figures of American Association history. Kelley operated the team as club president until 1946. Broadcaster Halsey Hall was the Millers' play-by-play man from 1933 until the club folded in 1960 to make way for the Minnesota Twins.

Ted Williams, Willie Mays and Carl Yastrzemski were among some future major leaguers who played for the Millers. The Millers won nine pennants in the Association during their fifty-nine years. They played their home games at Nicollet Park until 1955, the ballpark being demolished the following year. That site, at 31st and Nicollet Avenue, is now the home of a Wells Fargo bank. In 1956 they moved into Metropolitan Stadium in Bloomington, until 1960.

They had a heated crosstown rivalry with the St. Paul Saints. The two clubs often played "streetcar double-headers" on holidays, playing one game in each city.

Over the years the Millers were participants in four Junior World Series; matchups between the champions of the American Association and the International League. In the 1932 championship, the team was defeated by the Newark Bears 4 games to 2. The Millers, under manager Bill Rigney, clinched the 1955 series against the Rochester Red Wings, 4 games to 3, in the final ball game played at Nicollet Park. In 1958, the Millers, with Gene Mauch as skipper, beat the Montreal Royals 4 games to 0. Their last appearance in this Series was in 1959, with Mauch as manager, when the Millers lost the series 4 games to 3 to the Havana Sugar Kings.

After the farm system era began, the Millers were top-level affiliates of the Boston Red Sox (1936–38; 1958–60) and New York Giants (1946–57). The Red Sox actually swapped ownership of their top farm club, the San Francisco Seals of the Pacific Coast League, for the Millers in 1957, enabling the Giants to move to San Francisco.

The Millers ceased operations after the 1960 season with the arrival of the Minnesota Twins in 1961. The Red Sox affiliated with the Pacific Coast League's Seattle Rainiers for 1961. The Millers ended with an overall record of 4,800–4,365. Through the years, Millers pitchers threw seven no-hitters, and a Miller batter was the league-leader in home runs twenty-one times and RBIs nine times.

Numerous famous baseball players, managers and coaches have appeared for the Minneapolis Millers as players at some point in their careers, these players include:

Carl Michael Yastrzemski is an American former Major League Baseball player. He was elected to the Baseball Hall of Fame in 1989. Yastrzemski played his entire 23-year Major League career with the Boston Red Sox (1961–1983). He was primarily a left fielder, but also played 33 games as a third baseman and mostly was a first baseman and designated hitter later in his career. Yastrzemski is an 18-time All-Star, the possessor of seven Gold Gloves, a member of the 3,000 hit club, and the first American League player in that club to also accumulate over 400 home runs. He is second on the all-time list for games played, and third for total at-bats. He is the Red Sox' all-time leader in career RBIs, runs, hits, singles, doubles, total bases, and games played, and is third on the team's list for home runs, behind Ted Williams and David Ortiz. 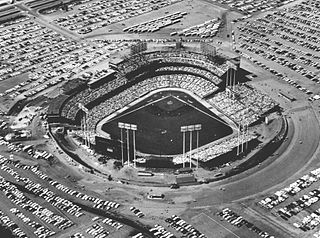 Metropolitan Stadium was a sports stadium that once stood in Bloomington, Minnesota, just outside Minneapolis and St. Paul. The Minneapolis Millers minor league baseball team played at Met Stadium from 1956 to 1960. The Minnesota Twins and the Minnesota Vikings then played at the "Met" from 1961 to 1981. The North American Soccer League soccer team Minnesota Kicks also played there from 1976 to 1981.

Nicollet Park was a baseball ground located in Minneapolis, Minnesota, United States. The ground was home to the minor league Minneapolis Millers of the Western League and later American Association from 1896 to 1955.

Lexington Park was the name of a former minor league baseball park in St. Paul, Minnesota. It was the home of the St. Paul Saints from 1897 through 1956, when it was replaced by the first version of Midway Stadium.

Midway Stadium is the name of two different minor league baseball parks in Saint Paul, Minnesota, United States, both now demolished. The name derived from the location of the stadium in St. Paul's Midway area, so named because it is roughly halfway between the downtowns of Minneapolis and Saint Paul.

The Western League was the name of several minor league baseball leagues that operated between 1885 and 1899. These leagues were focused mainly in the Midwestern United States. 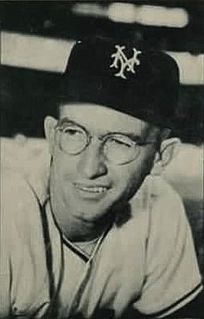 William Joseph Rigney was an American infielder and manager in Major League Baseball. A 26-year big-league veteran, Rigney played for the New York Giants from 1946 to 1953, then spent 18 seasons as the skipper of three major-league clubs. The Bay Area native began his managerial career with the Giants (1956–1960) as the team's last manager in New York City (1957) and its first in San Francisco (1958). In 1961, Rigney became the first manager in the history of the Los Angeles Angels of the American League, serving into May of 1969. Then, in 1970, he led the Minnesota Twins to the American League West Division championship, the only postseason entry of his big-league tenure. Fired in midseason of 1972, he concluded his managerial career in 1976 by serving a one-year term at the helm of his original team, the Giants.

Michael Franklin "Pinky" Higgins was an American third baseman, manager, front office executive and scout in Major League Baseball who played for three teams and served as manager or general manager of the Boston Red Sox during the period of 1955 through 1965. During his playing days, he batted and threw right-handed, and was listed as 6 feet 1 inch (1.85 m) tall and 185 pounds (84 kg).

Athletic Park was the home of the Minneapolis Millers baseball team from 1889 to mid-season 1896. The park was located behind the West Hotel at 6th St and 1st Ave North in Minneapolis near where Target Center and Target Field are today.

Stew Thornley is an author of books on sports history, particularly in his home state. He is an official scorer and online gamecaster for the Minnesota Twins. Thornley also does official scoring for Minnesota Timberwolves basketball games.

The Northern League was a name used by several minor league baseball organizations that operated off and on between 1902 and 1971 in the upper midwestern United States and Manitoba, Canada.

Halsey Lewis Hall was a sports reporter and announcer in the Minneapolis–Saint Paul area from 1919 until the 1970s.

Gerald Robert Zimmerman was an American professional baseball player and coach. He played all or part of eight seasons in Major League Baseball for the Cincinnati Reds and Minnesota Twins from 1961 to 1968, primarily as a catcher. Born in Omaha, Nebraska, he attended Milwaukie High School in Oregon. 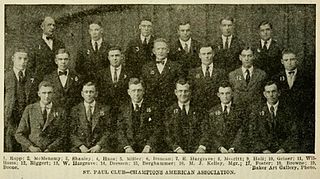 The St. Paul Saints were a baseball team who represented St. Paul, Minnesota in the Western League from 1894 to 1899 and the American Association from 1902 to 1960. They originated as the Sioux City franchise in the Western League which reorganized itself in November, 1893, with Ban Johnson as President. Johnson, a Cincinnati-based reporter, had been recommended by his friend Charles Comiskey, former major league star with the St. Louis Browns in the 1880s, who was then managing the Cincinnati Reds. After the 1894 season, when Comiskey's contract with the Reds was up, he decided to take his chances at ownership. He bought the Sioux City team and transferred it to St. Paul, where it enjoyed some success over the next 5 seasons. The 1920, 1922, and 1923 Saints were recognized as being among the 100 greatest minor league teams of all time.