Mitsou is the name of a French war-time novella that was published by Colette in 1919. It was later made into a 1956 film Mitsou .

The eponymous protagonist, a 24-year-old star in a show at the Montmartre in Paris in 1917, hides briefly two lieutenants in her garderobe to help her friend Petite Chose. One of the men is the educated "blue lieutenant". He writes to her the next day thanking her, and Mitsou's surprisingly eloquent response results in an exchange of letters which express their blossoming attraction and love. Eventually, the lieutenant returns for a brief and singular visit. An apparently final exchange of letters seems to conclude the affair, although Mitsou does not give up hope for a future of the relationship.

The well-received novella contains a play-like dialogue between Mitsou and the people around her as well as the letter exchange. The main characters are based on her second husband's brother, Robert de Jouvenel, and his mistress, Zou, but may also reflect a young Colette in her early relationship with her future first husband Henry Gauthier-Villars. [1]

The 1956 French film Mitsou is based on Colette's story. Danièle Delorme played the main character.

Sidonie-Gabrielle Colette, known mononymously as Colette, was a French author and woman of letters. She was also a mime, actress, and journalist. Colette is best known in the English-speaking world for her 1944 novella Gigi, which was the basis for the 1958 film and the 1973 stage production of the same name. Her short story collection The Tendrils of the Vine is also famous in France.

Gigi is a 1944 novella by French writer Colette. The plot focuses on a young Parisian girl being groomed for a career as a courtesan and her relationship with the wealthy cultured man named Gaston who falls in love with her and eventually marries her.

Prosper Mérimée was a French writer in the movement of Romanticism, and one of the pioneers of the novella, a short novel or long short story. He was also a noted archaeologist and historian, and an important figure in the history of architectural preservation. He is best known for his novella Carmen, which became the basis of Bizet's opera Carmen. He learned Russian, a language for which he had great affection, and translated the work of several important Russian writers, including Pushkin and Gogol, into French. From 1830 until 1860 he was the inspector of French historical monuments, and was responsible for the protection of many historic sites, including the medieval citadel of Carcassonne and the restoration of the façade of the cathedral of Notre-Dame de Paris. Along with the writer George Sand, he discovered the series of tapestries called The Lady and the Unicorn, and arranged for their preservation. He was instrumental in the creation of Musée national du Moyen Âge in Paris, where the tapestries now are displayed. The official database of French monuments, the Base Mérimée, bears his name. 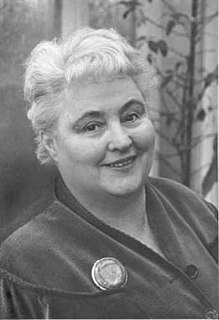 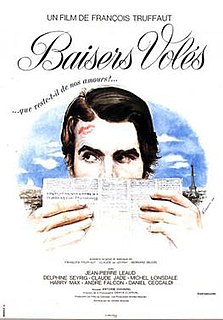 Stolen Kisses is a 1968 French romantic comedy-drama film directed by François Truffaut, starring Jean-Pierre Léaud, Delphine Seyrig and Claude Jade. It continues the story of the character Antoine Doinel, whom Truffaut had previously depicted in The 400 Blows (1959) and the short film Antoine and Colette (1962). In this film, Antoine begins his relationship with Christine Darbon, which is depicted further in the last two films in the series, Bed & Board (1970) and Love on the Run (1979).

Miss Lonelyhearts is a novella by Nathanael West. He began writing it early in 1930 and completed the manuscript in November 1932. Published in 1933, it is an Expressionist black comedy set in New York City during the Great Depression. It is about a male newspaper advice columnist who provides advice to lonesome people who becomes so affected by their desperate letters that he spirals into depression, drinking, and ill-considered sexual affairs, which leads to his downfall.

Elisabeth of France or Elisabeth of Valois was Queen of Spain as the third spouse of Philip II of Spain. She was the eldest daughter of Henry II of France and Catherine de' Medici.

Possession: A Romance is a 1990 best-selling novel by British writer A. S. Byatt that won the 1990 Booker Prize. The novel explores the postmodern concerns of similar novels, which are often categorised as historiographic metafiction, a genre that blends approaches from both historical fiction and metafiction.

Demi-monde is French for "half-world". The term derives from a play called Le Demi-Monde, by Alexandre Dumas fils, published in 1855. The play dealt with the way that prostitution at that time threatened the institution of marriage. The demi-monde was the world occupied by elite men and the women who entertained them and whom they kept, the pleasure-loving and dangerous world Dumas immortalized in the 1848 novel La Dame aux Camélias and its many adaptations. Demimondaine became a synonym for a courtesan or a prostitute who moved in these circles—or for a woman of social standing with the power to thumb her nose at convention and throw herself into the hedonistic nightlife. A woman who made that choice would soon find her social status lost, as she became "déclassée". The 1958 film Gigi, based on a 1944 novella by Colette, vividly portrays the world of the demimonde near the end of its existence. Gigi's Aunt Alicia, a legendary courtesan now enjoying a wealthy retirement, trains her teenage niece in elegant manners and deportment and the value of jewels and tries to stir her interest in fashion, in order to prepare her for life in the demimonde, pleasing the gentlemen who will provide her with the means to live comfortably.

Gigi is a 1958 American musical romantic comedy film directed by Vincente Minnelli and processed using Metro-Goldwyn-Mayer's Eastmancolor film process Metrocolor. The screenplay by Alan Jay Lerner is based on the 1944 novella of the same name by Colette. The film features songs with lyrics by Lerner and music by Frederick Loewe, arranged and conducted by André Previn. 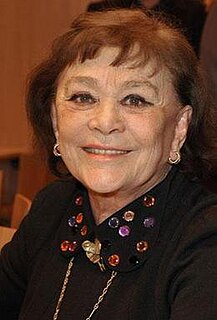 Honoré Lechasseur is one of two main characters in the Doctor Who spin-off Time Hunter series published by Telos Publishing Ltd. He is a time sensitive, which means that he possess the ability to see into people's pasts and futures when he is in their vicinity. He is also able to physically travel along people's timelines when he is working with a time channeller, such as his friend Emily Blandish. Honoré has appeared on some of the covers of the Time Hunter novellas.

Antonia White was a British writer and translator, known primarily for Frost in May, a semi-autobiographical novel set in a convent school. It was the first book reissued by Virago Press in 1978, as part of their Modern Classics series of books by previously neglected women authors.

Emilia is a character in the tragedy Othello by William Shakespeare. The character's origin is traced to the 1565 tale, "Un capitano Moro" from Giovanni Battista Giraldi Cinthio's Gli Hecatommithi. There, the character is described as young and virtuous, is referred to simply as the ensign's wife, and becomes Desdemona's companion in Cyprus. In Shakespeare, she is named Emilia, is the wife of Othello's ensign, Iago, and is an attendant to Othello's wife, Desdemona. While considered a minor character in the drama, she has been portrayed by several notable actresses on film, with Joyce Redman receiving an Academy Award nomination for her performance.

Graham Greene (1904–1991) was an English novelist regarded by many as one of the greatest writers of the 20th century. Combining literary acclaim with widespread popularity, Greene acquired a reputation early in his lifetime as a major writer, both of serious Catholic novels, and of thrillers. He was shortlisted, in 1966 and 1967, for the Nobel Prize for Literature. He produced over 25 novels, as well as several plays, autobiographies, and short stories. 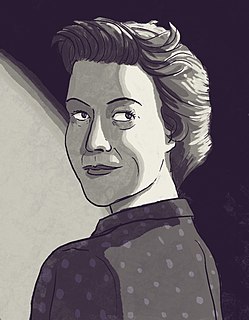 Jacqueline Audry was a French film director who began making films in post-World War II France and specialised in literary adaptations. She was the first commercially successful female director of post-war France.

Mitsou is a 1956 French comedy film directed by Jacqueline Audry and starring Danièle Delorme, Fernand Gravey and François Guérin. A music hall singer becomes involved in a love triangle with an older wealthy man and a young army officer. It is based on the 1919 novella Mitsou by Colette. The title role is played by Danièle Delorme who had previously appeared as Gigi in the 1949 film adaptation of Colette's work Gigi which was also directed by Audry.

Yola Letellier was a French socialite and the wife of a newspaper owner.