The museum provides a venue for the regular meetings of the Northumbrian Pipers' Society. In September 2008, disastrous flooding in central Morpeth forced the successful evacuation of the entire collection. [2] After extensive repairs and refurbishment, the Chantry was reopened the following year, with a visit by the Princess Royal. [3]

Bagpipes are a woodwind instrument using enclosed reeds fed from a constant reservoir of air in the form of a bag. The Scottish Great Highland bagpipes are the best known examples in the Anglophone world, but people have played bagpipes for centuries throughout large parts of Europe, Northern Africa, Western Asia, around the Persian Gulf and northern parts of South Asia. 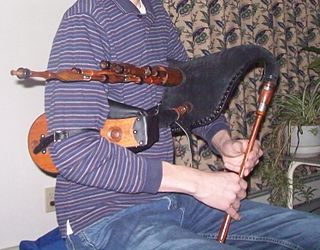 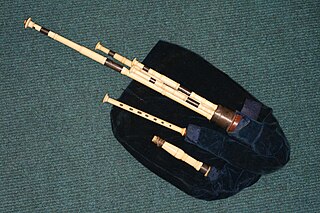 The Northumbrian smallpipes are bellows-blown bagpipes from North East England, where they have been an important factor in the local musical culture for more than 250 years. The family of the Duke of Northumberland have had an official piper for over 250 years. The Northumbrian Pipers' Society was founded in 1928, to encourage the playing of the instrument and its music; Although there were so few players at times during the last century that some feared the tradition would die out, there are many players and makers of the instrument nowadays, and the Society has played a large role in this revival. In more recent times the Mayor of Gateshead and the Lord Mayor of Newcastle have both established a tradition of appointing official Northumbrian pipers.

Here Northumbria is defined as Northumberland, the northernmost county of England, and County Durham. According to 'World Music: The Rough Guide', "nowhere is the English living tradition more in evidence than the border lands of Northumbria, the one part of England to rival the counties of the west of Ireland for a rich unbroken tradition. The region is particularly noted for its tradition of border ballads, the Northumbrian smallpipes and also a strong fiddle tradition in the region that was already well established in the 1690s. Northumbrian music is characterised by considerable influence from other regions, particularly southern Scotland and other parts of the north of England, as well as Irish immigrants. 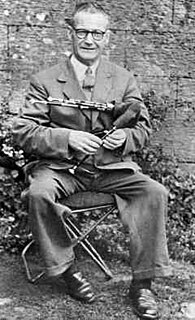 Billy Pigg was an English player of Northumbrian smallpipes. He was a vice-president and an influential member of the Northumbrian Pipers Society from 1930 until his death. 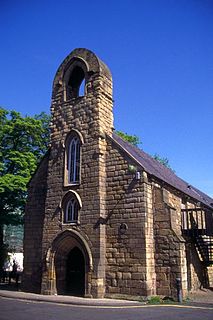 Morpeth Chantry also known as All Saints Chantry is a Grade I listed building situated adjacent to the site of the ancient bridge across the River Wansbeck at Morpeth, Northumberland.

Robert Reid is widely acknowledged as the creator of the modern form of the Northumbrian Smallpipes. He lived and worked at first in Newcastle upon Tyne, but moved later to the nearby town of North Shields at the mouth of the Tyne, probably in 1802. North Shields was a busy port at this time. The Reids were a family with a long-standing connection to piping; Robert's father Robert Reed (sic), a cabinet maker, had been a player of the Northumbrian big-pipes, and an associate of James Allan, his son Robert was described later by James Fenwick as a beautiful player as well as maker of smallpipes, while Robert's son James (1814–1874) joined his father in the business. Robert died in North Shields on the 13th or 14 January 1837, and his death notice in the Newcastle Journal referred to him as a "piper, and as a maker of such instruments is known from the peer to the peasant, for the quality of their tone, and elegance of finish". He is buried in the graveyard of Christ Church, North Shields. His wife Isabella died in 1849, of cholera. There were repeated outbreaks of the disease at this time especially in the poor 'low town', near the river, where the Reids lived.

George Grey Armstrong (1877–1961) was a noted player, teacher and maker of the Northumbrian smallpipes. He also composed several tunes for the instrument. He lived in Hexham, Northumberland. He learned to play the instrument from the Clough family, and studied pipemaking with John E. Baty. There is a photograph of him with his pipes, from the Cocks collection, at.

William Alfred Cocks (1892-1971) was a master clock maker from Ryton, near Newcastle upon Tyne. He had a lifelong interest in the history and culture of the North-east of England, and particularly in the Northumbrian smallpipes and half-long pipes. He assembled a large collection of historic bagpipes, their music, and related materials, which forms the core of the collection now housed at the Morpeth Chantry Bagpipe Museum. He was elected to the Society of Antiquaries of Newcastle upon Tyne in 1920, remaining a member until his death. In 1928, he was one of the earliest members of the Northumbrian Pipers' Society, being elected one of the technical advisers, with responsibility for smallpipes. He became a Vice-President of the Society in 1938. When an exhibition of historic pipes was held in the Black Gate Museum in 1961, most of the exhibits were from Cocks's collection.

Northumbrian Minstrelsy is a book of 18th and 19th century North East of England folk songs and pipe music, intended to be a lasting historical record. The book was edited by John Stokoe and the Rev John Collingwood Bruce LL.D., F.S.A., and published by and on behalf of the Society of Antiquaries of Newcastle upon Tyne in 1882. It was reprinted in 1965 by Folklore Associates, Hatboro, Pennsyslvania, with a foreword by A. L. Lloyd.

Old Tom Clough, was an English player of the Northumbrian pipes, or Northumbrian smallpipes. He was born into a family of miners who had also been pipers for several generations; his son Henry, grandson Tom, and great-grandson 'Young' Tom were pipers too. He is thus a central figure in a family tradition linking the earliest days of the modern instrument to almost the present day.

John Milburn, known as Muckle Jock, was a player of the Border pipes, from near Bellingham in Northumberland. His pipes, which survive, are in the Cocks collection at the Morpeth Chantry Bagpipe Museum; his family referred to this set as the 'half-long' pipes. Some more detailed photographs of this set of pipes, taken by Anita Evans, are at. Tradition states that this instrument was given to Muckle Jock in around 1772 by Col. Reid of Chipchase Castle; Milburn would only have been about 18 at the time, if this tradition is correct. The museum catalogue entry for his pipes states that they subsequently belonged to his grandson Lewis Proudlock. The statement is incorrect in detail, for while Proudlock's mother was a Milburn, she was not Muckle Jock's daughter; it seems almost certain that they were related, however. Although Muckle Jock's pipes survive, unfortunately there is no direct evidence of the music he played on them.