Mwamba Rugby Football Club, (Known as Stanbic Mwamba RFC for sponsorship purposes), is a Kenyan rugby union club based in Nairobi. The club was founded in 1977 with the aim of promoting rugby union among indigenous Kenyans at a time when the sport of rugby was still de facto a preserve of whites in Kenya.

The word “Mwamba” is Swahili for “rock" or "boulder”, which signifies stability in performances in the local leagues, firmness in the desire to nurture local talent, and consistency in the tenacious commitment to keeping alive the dreams of its founders.

Since formation the club has played at the Nairobi Railway Club next to Uhuru Park. Mwamba RFC competes in the Kenya Cup, the highest-level rugby competition in Kenya. [1] 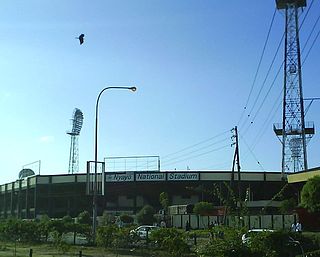 Nyayo National Stadium is a multi-purpose stadium in Nairobi, Kenya. It is located at the square of Mombasa Road, Langata Road and the Aerodrome Road. It is approximately two kilometers from the City Center, directly opposite Nairobi Mega Mall, formerly known as Nakumatt Mega. The stadium was built in 1983 for a capacity of 30,000. It is currently used mostly for football matches. The popular AFC Leopards football club plays most of its home games at Nyayo stadium. The stadium is also used for athletics, swimming and various ceremonies most common of which are National Holiday celebrations. Other facilities at the Nyayo Stadium include a gymnasium and a 50-metre swimming pool. Rugby union club Mwamba RFC used the Nyayo National Stadium for home games.

Humphrey Kayange is a Kenyan former rugby union player and organic chemist. Kayange is known within the rugby sevens community, as he has produced some of the best performances for the Kenya national sevens side. He is a former captain of the team. 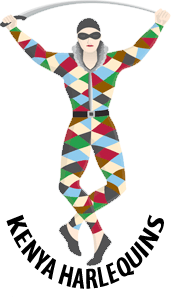 Edward Rombo is a Kenyan former rugby union and rugby league footballer. He was one of the few Kenya rugby players to turn professional when he moved to Leeds Rhinos in 1990.

Mean Machine RFC is a Rugby union club based in Nairobi, Kenya. It is the representative side of the University of Nairobi and was founded in 1977 during the time when rugby union in Kenya was predominantly played by white settlers and expats. In their inaugural year they won the Kenya Cup. During the 1980s the club was forced to close due to political pressure after the 1982 coup d'état attempt, and many players would have to play for other clubs.