WIRES Wildlife Rescue (NSW Wildlife Information Rescue and Education Service) is the largest wildlife rescue & rehabilitation charity in Australia. [1] [2] It is a non-profit organisation providing rescue and rehabilitation for all native Australian fauna. [1] All animal rescuers and carers are volunteers. It is funded by public donations and operates throughout the most populous Australian state, New South Wales.

WIRES mission statement is to actively rehabilitate and preserve Australian wildlife and to inspire others to do the same.

The main activities of WIRES is to respond to individual public reports of sick, injured or orphaned native wildlife. If necessary, trained WIRES volunteers will rescue (collect) the animal, foster it (provide treatment and care until it is healthy), and release it back into the wild. WIRES operates under an authority from a government agency, the National Parks and Wildlife Service, allowing it to rescue and rehabilitate native animals, a practice which is generally forbidden by law in Australia. WIRES offers a short rescue and immediate care course that equips people to work with common species. [3]

Volunteers of WIRES can choose their level of commitment to the organization. Some of them also take extra training to handle certain species, as Koalas, snakes, possums, or gliders. [3] The organization has 28 branches across Australia, being the biggest volunteer group in the country. [4]

In addition to the rehabilitation of individual animals, WIRES aims to improve native animal welfare generally through:

WIRES was established in 1985, when an injured Australian white ibis was found in Hyde Park, Sydney. No organisation, government or conservation group could be found to take responsibility for its care. Other animal welfare groups, such as the RSPCA, were not experienced with the needs of native animals, while the only suitable government agency, the National Parks and Wildlife Service, did not have the funding and staff levels needed to cope with injured fauna.

A small group of private citizens formed to take on this responsibility and, by learning from one another, built up the knowledge and experience to meet the unique needs of Australian wildlife. The network grew quickly and in 1986 WIRES was officially launched in Sydney. In 1987 it was incorporated as a non-profit organisation.

As at 2020, WIRES has a network of some 3000 volunteer members in 28 branches across NSW. WIRES received around 100,000 phone calls from the public in 2010, and was called to assist over 95,000 mammals, birds, reptiles and amphibians. WIRES works closely with veterinarians, zoos, the NPWS and other animal welfare organisations.

In December 2019, WIRES announced that the organization experienced emergency conditions as never before. At the end of 2019, volunteers of WIRES attended more than 3,300 rescues for wild animals. Meanwhile, its rescue line received more than 20,000 calls. [5]

During the 2019-2020 bushfire crisis in Australia, WIRES had received around $60 million until February [6] in donations from individuals and companies concerned about wild animals. In August, the total amount reached $90 million. [4] WIRES decided to redistribute the money to other licensed animal rescue organisations across Australia. The animal welfare organization also provided grants for animal carers. [7]

Full details on how the emergency funding is being distributed https://www.wires.org.au/Emergency-Rescue-Rehabilitation-and-Recovery.Missing or empty |title= (help). WIRES continues to be transparent about the funding and update this page regularly.

WIRES took part in both a Royal Commission and an extensive review conducted by the Australian Government's Charities and Not for Profits Commission during 2020. The review was made public in October 2020, finding the charities (including WIRES) acted legally and responsibly, allocating funds to bushfire response programs and their delivery, and protecting donations from fraud. And were found to have "balanced immediate relief with the need to supply funds for the long-term recovery phase". https://www.acnc.gov.au/tools/reports/bushfire-response-2019-20-reviews-three-australian-charities.Missing or empty |title= (help)

All animal rescue and rehabilitation is carried out by WIRES' volunteer members in their own homes. Branches perform fundraising to subsidise the costs of animal feed, veterinary supplies, cages, and other expenses incurred by their members.

The WIRES Head Office and the NSW call centre, referred to as the WIRES Rescue Office, are located in Brookvale, Sydney. There are staff members looking after rescues, volunteers, training, communications, finance, IT and fundraising. WIRES Rescue Office operates 365 days a year, managing hundreds of calls a day from the community, working actively with WIRES volunteers and community vets to provide rescue advice and assistance for tens of thousands of native animals every year.

WIRES also has a wildlife ambulance covering the greater Sydney metropolitan region which provides assistance with rescues during the day when volunteer rescuers are at work and less available to attend rescues.

WIRES is an incorporated association. WIRES State council (WSC) is composed of elected volunteer representatives from WIRES 27 branches and WIRES Board is elected annually by the council from council members. WIRES Board has the responsibility for setting the policy and strategic direction of the organisation in conjunction with WIRES chief executive officer (CEO). WIRES is a registered charity and a separate group of five Directors oversees public donations through the WIRES Public Gift fund.

WIRES has the ACNC, the Australian Charities and Not-for-profits Commission tick of approval and DGR, deductible gift recipient status.

A humane society is a group that aims to stop cruelty to animals. In many countries, the term is used mostly for societies for the prevention of cruelty to animals (SPCA). In the United Kingdom, and historically in the United States, such societies provide waterway rescue, prevention and recovery services, or may give awards for saving human life.

An animal rescue group or animal rescue organization is dedicated to pet adoption. These groups take unwanted, abandoned, abused, or stray pets and attempt to find suitable homes for them. Many rescue groups are created by and run by volunteers, who take animals into their homes and care for them — including training, playing, handling medical issues, and solving behavior problems — until a suitable permanent home can be found.

Mission Australia is a national Christian charity that provides a range of community services throughout Australia. In 2019–20, Mission Australia employed approximately 2400 staff and 1250 volunteers, and supported 167,268 children, young people, adults and elderly people across 483 programs and services. The organisation specialises in the areas of homelessness and housing, families and children, early learning, youth, employment and skills, alcohol and other drugs, disability, mental health, and strengthening communities. James Toomey became CEO in November 2017, succeeding Catherine Yeomans, who served as CEO from March 2014.

Wildlife Warriors, originally called the Steve Irwin Conservation Foundation, is a conservationist organization that was established in 2002 by Steve Irwin and his wife, Terri Irwin, to involve and educate others in the protection of injured, threatened or endangered wildlife. Terri Irwin is still involved in the organization as patron and significant advisor. 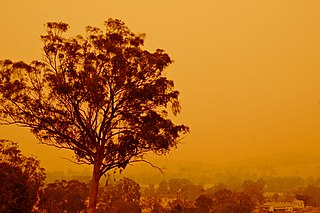 Bushfires in Australia are a widespread and regular occurrence that have contributed significantly to shaping the nature of the continent over millions of years. Eastern Australia is one of the most fire-prone regions of the world, and its predominant eucalyptus forests have evolved to thrive on the phenomenon of bushfire. However, the fires can cause significant property damage and loss of both human and animal life. Bushfires have killed approximately 800 people in Australia since 1851, and billions of animals.

The Australian Aerial Patrol is an aerial observation and support service in New South Wales, Australia. It was formed in 1957 following a meeting convened by the City of Greater Wollongong Council, with a charter to maintain the safety and the welfare of the community through aerial observation and support. The Aerial Patrol is available to respond to emergencies 24 hours a day, 365 days a year.

The Black Saturday bushfires were a series of fires that ignited across the Australian state of Victoria during extreme weather conditions on 7 February 2009. Burning around 450,000 ha for over a month, the fires destroyed over 2,100 homes, destroyed several regional towns and were fought by over 5,000 firefighting personnel. The Fires devastated many.

Featherdale Wildlife Park is a zoo located in Doonside, Sydney, Australia. The park is located in Sydney's south-west, approximately 40 km (25 mi) from Sydney's CBD. The park contains various species native to Australia, and is known to be one of the world's largest collections of Australian fauna. The facility provides displays, events and interactive experiences. The site covers 3.29 hectares, ranging from animal enclosures and display areas to visitor facilities, including picnic spaces, shops and basic amenities. It specialises in Australian native wildlife and birds, as well as reptiles and marsupials. The premises is accredited by the Zoo Aquarium Association Australia.

Animals Australia is an Australian animal protection organisation. Its aim is to investigate and expose animal cruelty, inspire kindness to animals through public awareness campaigns — particularly focused on farmed animals — and provide funding and support to other animal organisations where appropriate, for example in emergency response during the 2019/2020 Australian Black Summer bushfires and COVID-19 pandemic.

Wildlife Victoria is the preeminent wildlife rescue service in the state of Victoria, Australia. Established in 1989, it is a non-profit, volunteer based charity that provides an emergency phone service to the community by responding to calls regarding sick, injured and orphaned wildlife.

Snowy Hydro SouthCare was a rescue and aeromedical helicopter service based in Canberra, Australia from 1998 to 2017.

Give Our Strays A Chance is an organisation founded in 2013 by a Western Australian 10-year-old boy Dean Morris, for the purpose of raising awareness of animal rescue and raising donations for animal shelters and pounds. 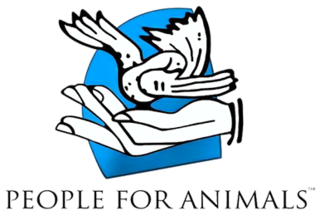 People For Animals is one of India’s largest animal welfare organisations, originally founded by Maneka Gandhi in 1992. Currently, the headquarters of this organisation is located in New Delhi, with over 100 regional units located around India.

Redkite is a non-government charity organisation based in Sydney, Australia. It supports young cancer patients up to the ages of 18 and their families with financial assistance, hospital services and rehabilitation activities, social services and grant-making activities. The organisation operates in all Australian states and has raised $11.88 million through fundraising activities in the 2017 financial year with net surplus totalling $39,000. Redkite currently has 68 employees, 501-1000 active volunteers and 9 board members. Redkite is classified as a large charity organisation which makes up 17% of the 56,000 registered charities in Australia. Charities that provide educational or health services such as universities, hospitals and aged care facilities makeup 18.7% of the sector however contribute 45% of the sectors revenue which was reported to be 142.8 billion in 2017.

Animal Liberation Queensland (ALQ) is an independent not-for-profit animal rights organisation operating in Queensland, Australia. Founded in 1979 by Jacki Batzloff, ALQ advocates for the rights of animals, exposing animal abuse and exploitation. ALQ is a registered charity with the Australian Charities and Not-for-profits Commission (ACNC) and its headquarters are located in Brisbane. 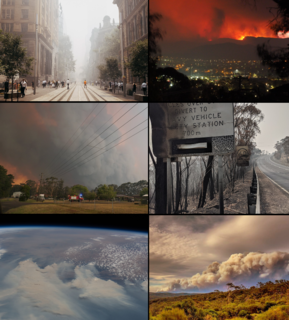 The 2019–20 Australian bushfire season, colloquially known as the Black Summer, was a period of unusually intense bushfires in many parts of Australia.