Niko Nirvi (born 16 February 1961 in Jokioinen, Finland [1] [2] ), pen name Nnirvi, is a long-term major icon in the Finnish gaming [3] [4] [1] world. He is well known for writing computer game reviews since the 1980s in MikroBitti , C=Lehti and the computer game yearbooks that were predecessors of the Pelit magazine. He has worked for the latter since its founding in 1992, and holds a column in addition to making reviews and other reports.

Nirvi began his career as a game reviewer in 1986 on pages of MikroBitti. He had made a bet with his friend that he could get his review published in the magazine. He sent two reviews, Zoids and Uridium and the former was published (they already had one Uridium review). Nirvi wrote reviews and a regular column about new games for Mikrobitti and became the "game editor" of the magazine. He also wrote reviews for C=Lehti. When Pelit, that concentrated solely on gaming, was founded by the same publisher, Nirvi joined its ranks as an editor, and has written a regular column for each issue.

Trademarks of his are signing with "Nnirvi" or a variation, and never showing his face in the magazine. Photos of him are always either covered or edited in a way that the face is unrecognizable. His personal picture in his articles is usually a gaming or movie character whose face is blurred (for example Master Chief) while the rest of the crew's articles feature their real faces. Wallu's drawings of Nirvi depict him as a bearded man with Spock's Vulcan ears. According to Nirvi, his avoidance of publicity started in 1988, when a MikroBitti reader asked for a photograph of him, which Nirvi instantly declined, and this avoidance has strengthened ever since. Nirvi does not even allow verbal descriptions of his appearance. [1] [2]

Nirvi's style is typically humorous, and sometimes unorthodox. Some of Nirvi's most unconventional reviews were published in C=Lehti. The review of Domark's motorboat game Hydra was written as a nursery rhyme from the beginning to the end. The review of Battle Island contained just two words: "Paska Commando-klooni." ("shitty Commando clone.")

Nirvi has made it clear that he does not like sports or sports related video games. He has been a big fan of Babylon 5, Star Wars and Star Trek. He has also stated that he has read Lord of the Rings over ten times.

Nirvi has given several statements about the usefulness of computer gaming. At one interview he said that gaming is a completely useless hobby. On the first issue of Pelit (1992) he wrote that gaming helps people overcome their fears towards computers (that is typical for some old people). In another interview he declared that many strategy games can develop the players' intellectual capabilities: they can teach English, history and strategic thinking.

Nirvi's favorite games from the 1980s are Star Wars (Atari's arcade game), Ultima IV, Hack (the precursor of NetHack), Elite and Dungeon Master. In 2000 he stated that the best PC game ever is UFO: Enemy Unknown.

Mikrobitti is a Finnish computer magazine published in Helsinki, Finland.

Harri Sakari Vaalio, also known by his artist name Wallu, is a Finnish cartoonist. He is known for his strip "Punaniska" comic albums and his strips in Finnish magazines such as the "Mikrokivikausi" strip in the computer magazine MikroBitti. He has also written and drawn 12 Winnie the Pooh stories for the Finnish Winnie the Pooh magazine in 1986-1988. His other comics includes Hessu-kissa, Armas, also known as Lämsänperäläiset, and KyöPelit. In the early 1980s he was a teacher in the local elementary school, now known as Vuokkoharjun ala-aste.

Jyrki Jouko Juhani Kasvi is a Finnish politician. He has been a member of the Finnish Parliament, representing the Green League. In the Parliament, he was most active in the Committee for the Future, which he represented in the European Parliamentary Technology Assessment network (EPTA), related to technology assessment. He was first elected to the Parliament in 2003, re-elected for a second term in 2007, and lost his seat in the election of 2011. He was again elected in 2015 but lost his seat in the 2019 elections. He has also been a member of the city council of Espoo since 1997 and the second vice-president of the International Parliamentarians' Association for Information Technology (IPAIT) since 2004.

Raid Over Moscow is a computer game by Access Software published in Europe by U.S. Gold for the Commodore 64 in 1984 and other microcomputers in 1985-1986.

Spellcross: The Last Battle is a turn-based strategy game for IBM PC compatibles, developed by a slovak company Cauldron HQ and published by Sales Curve Interactive in 1997/1998. In Spellcross, a contemporary Earth military fights for survival against an extradimensional invasion of orcs, undead, harpies and other fantasy creatures.

Jukka Tapanimäki was a Finnish game programmer. Tapanimäki wrote his games for the Commodore 64 computer, and many have been ported to other computer systems. Tapanimäki was a reviewer for MikroBitti and "C" computer magazines; and a freelance writer of advanced-level computer programming articles. He also published a book called C-64 Pelintekijän Opas in 1990. 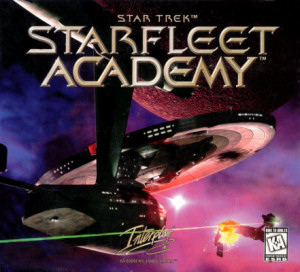 Star Trek: Starfleet Academy is a Star Trek PC simulation game that simulates the life of a typical Starfleet cadet. The object in the game is for the player to learn the basics of flying a starship so that the player can eventually become a captain of his own ship. It includes a simulation battle mode in which the player can pilot and fight ships of their choosing.

Alien Incident is a 1996 point-and-click graphic adventure game. It was developed by Finnish game developer Housemarque and published by GameTek for the MS-DOS platform. 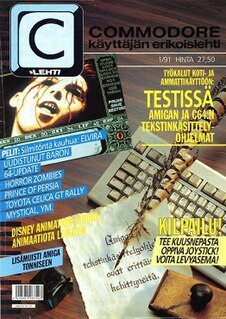 Inferno is a space combat simulator video game developed by Digital Image Design and published by Ocean Software in 1994 for the PC. It is a sequel to the 1992 game Epic.

Orion Burger is a computer adventure game developed by Sanctuary Woods and published by Eidos Interactive for the IBM-PC and Macintosh. It features a young man saving the Earth from an interstellar fast food chain through a time loop.

Alien Legacy is a sci-fi strategy game developed by Ybarra Productions and published by Sierra On-Line in 1994 for MS-DOS.

Risto J. Hieta, also known by the pseudonym Nordic or Nordic the Incurable, is a Finn connected with the role playing and computer game culture.

Retribution is a video game developed by British studio Astros Productions and published by Gremlin Interactive for DOS.

Tank Commander is a video game developed by Big Red Software and published by Domark for the PC.

Steel Thunder is a 1988 video game published by Accolade. Designed by Tom Loughry, it is labeled an "American Battle Tank Simulation" on the title screen.