Norman Friedman, Ph.D., is an American internationally known author and analyst, strategist, and historian. [1] He has written over 30 books and numerous articles on naval and other military matters, [1] has worked for the U.S. Navy and Marine Corps, and has appeared on television programs including PBS, the Discovery Channel, C-SPAN, and National Geographic.[ citation needed ]

Friedman holds a bachelor's and a doctorate from Columbia University in theoretical physics, completing his dissertation “Additional Scattering of Bloch Electrons by Simultaneous Imputity and Lattice Interaction” in 1974. [2] [3] From 1973 to 1984, he was at the Hudson Institute, becoming Deputy Director for National Security Affairs.[ clarification needed ] He then [ when? ] worked for the United States Navy as in-house consultant.[ clarification needed ] From 2002 to 2004, he served as a futurologist for the United States Marine Corps. [4] He has held the position of Visiting Professor of Operations Research, University College, University of London. [5]

The Illustrious class was a class of aircraft carrier of the Royal Navy that included some of the most important British warships in the Second World War. They were laid down in the late 1930s as part of the rearmament of British forces in response to the emerging threats of Nazi Germany, Fascist Italy and Imperial Japan.

The Town class consisted of 10 light cruisers built for the Royal Navy during the 1930s. The Towns were designed to the constraints imposed by the London Naval Treaty of 1930. The ships were built in three distinct sub-classes, the Southampton, Gloucester and Edinburgh classes respectively, each sub-class adding on further weaponry. 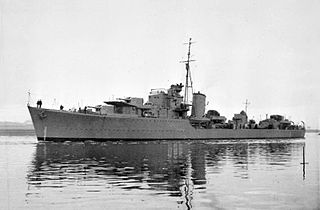 ORP Piorun was an N-class destroyer operated by the Polish Navy in World War II. The word piorun is Polish for "Thunderbolt". Ordered by the Royal Navy in 1939, the ship was laid down as HMS Nerissa before being loaned to the Poles in October 1940 while still under construction.

Dante Alighieri was the first dreadnought battleship built for the Regia Marina and was completed in 1913. The ship served as a flagship during World War I, but saw very little action other than the Second Battle of Durazzo in 1918 during which she did not engage enemy forces. She never fired her guns in anger during her career. Dante Alighieri was refitted in 1923, stricken from the Navy List five years later and subsequently sold for scrap. 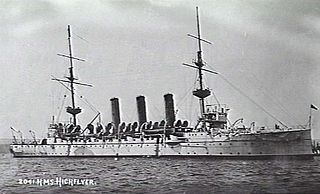 The Highflyer-class cruisers were a group of three second-class protected cruisers built for the Royal Navy in the late 1890s. 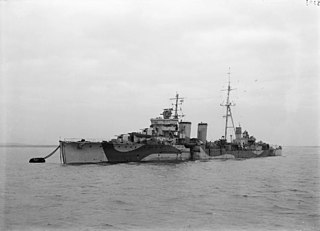 HMS Caledon was a C-class light cruiser built for the Royal Navy during World War I. She was the name ship of the Caledon sub-class of the C class. She survived both world wars to be scrapped in 1948. 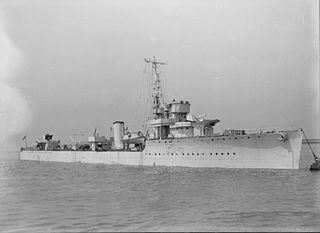 HMS Velox (D34) was a V-class destroyer built in 1918. She served in the last year of the First World War and was engaged in the Second Ostend Raid. During the interwar period she underwent a refit and continued serving during the Second World War as a long range convoy escort in the battle of the Atlantic. Post-war Velox was broken up in the reduction of the fleet. Sailors of the ship took part in the Royal Navy mutiny of 1919.

The Armstrong Whitworth 12-inch naval gun of 40 calibres length was designed by and manufactured mainly by Armstrong's ordnance branch, Elswick Ordnance Company. It was intended for the Royal Navy's Royal Sovereign-class battleships, but budgetary constraints delayed their introduction. The first units were instead supplied to Japan. As the Type 41 12-inch (305 mm) 40-calibre naval gun it was the standard main battery on several early United Kingdom-built pre-dreadnought battleships of the Imperial Japanese Navy. 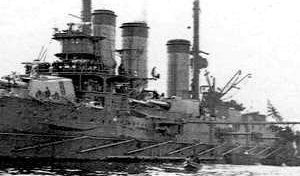 The Vickers 10 inch naval gun was used on battleships and armoured cruisers built during the first decade of the 20th century. They were used as the Type 41 10-inch /45-caliber aboard the British-built semi-dreadnought Katori-class and Satsuma-class battleships of the Imperial Japanese Navy.

HMS Woolston was a W-class destroyer of the Royal Navy. She served through two world wars, surviving both of them.

HMS Vortigern was a V-class destroyer of the Royal Navy. She served in both World Wars, and was sunk in 1942.

The first HMS Whirlwind was a W-class destroyer of the British Royal Navy that saw service during World War I and World War II. 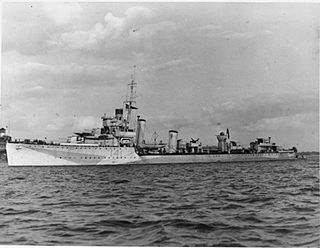 HMS Walpole (D41) was a W-class destroyer of the Royal Navy. 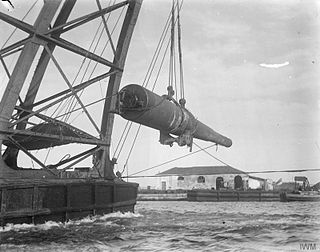 The 305 mm /46 Model 1909 was a naval gun that was the main armament of two classes of Italian dreadnought battleships and one unique dreadnought of the Regia Marina built at the beginning of World War I. Many of these guns were later modified to 320 mm Model 1934 and 320 mm Model 1936 naval guns by boring out their barrels, adding new liners and developing new ammunition. A number of unconverted guns including those from the scrapped Dante Alighieri and the salvaged Leonardo da Vinci were also used as coastal artillery during World War II.

Sakaki was one of 10 Kaba-class destroyers built for the Imperial Japanese Navy during World War I. While operating in the Aegean Sea, Sakaki was torpedoed by an Austro-Hungarian U-boat in 1917.