The first edition (NBL1) was issued between 1921 and 1983, including 19 volumes and 5,100 articles. It was published by Aschehoug with economic support from the state.[ citation needed ]

Kunnskapsforlaget bought the rights to NBL1 from Aschehoug in 1995, and after a pre-project in 1996–97 the work for a new edition began in 1998.[ citation needed ] The project had economic support from the Fritt Ord Foundation and the Ministry of Culture, and the second edition (NBL2) was launched in the years 1999–2005, including 10 volumes and around 5,700 articles. [1] In 2006 the work for an electronic edition of NBL2 began, with support from the same institutions.[ citation needed ] In 2009 an Internet edition, with free access, was released by Kunnskapsforlaget together with the general-purpose Store norske leksikon . The electronic edition features additional biographies, and updates about dates of death of biographies. Apart from that, the vast body of text is unaltered from the printed version. [1]

This is a list of volumes in the second edition of Norsk biografisk leksikon. [2]

This is a list of volumes in the first edition of Norsk biografisk leksikon. [3]

Lars Hertervig was a Norwegian painter. His semi-fantastical work with motives from the coastal landscape in the traditional district of Ryfylke is regarded as one of the peaks of Norwegian painting.

Conradine Birgitte Dunker was a Norwegian socialite and writer.

Harald Nicolai Storm Wergeland was a Norwegian physicist. He was a professor at the Norwegian Institute of Technology.

Johan Koren Christie was a Norwegian writer. He was a notable nationalist writer in the middle of the nineteenth century. 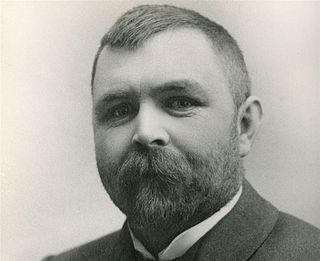 Haakon Nyhuus was a Norwegian librarian and encyclopedist.