The Norwegian Institute of International Affairs (Norwegian : Norsk utenrikspolitisk institutt; NUPI) is a Norwegian research institution based in Oslo, Norway. It was established by the Norwegian Parliament in 1959.

Although it was previously entirely funded over the state budget (later supplemented by a sizable share of outside project funding), NUPI's independence from Norwegian foreign policy is secured by its subordination to the Ministry of Education rather than the Ministry of Foreign Affairs (distinguishing it from its counterparts in Sweden and many other countries). The institute as such has never taken a policy stance on current issues, but has left this to the professional judgment of its individual researchers. Nevertheless, in the Norwegian political debate and in the wider Norwegian research community of international affairs, NUPI has tended to be perceived as close to the government's views, whether the government has been Labour or Conservative, center-left or center-right. Several of its directors have been prominent Labour politicians, notably John Sanness, Johan Jørgen Holst and Jan Egeland. Three of its other researchers, Anders C. Sjaastad, John Kristen Skogan and Janne Haaland Matlary, have been members of Conservative / center-right or centrist governments. [2]

The institute is organised into four research groups:

The position was originally a permanent appointment. In 1996 it was changed to a once-renewable 6-year appointment.

The foreign relations of Norway are based on the country's membership in NATO and within the workings of the United Nations (UN). Additionally, despite not being a member of the European Union (EU), Norway takes a part in the integration of EU through its membership in the European Economic Area. Norway's foreign ministry includes both the minister of foreign affairs and minister of international development. 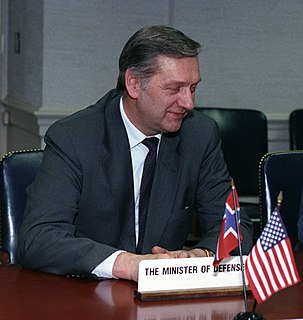 Johan Jørgen Holst was a Norwegian politician representing Labour, best known for his involvement with the Oslo Accords.

The Peace Research Institute Oslo is a private research institution in peace and conflict studies, based in Oslo, Norway, with around 100 employees. It was founded in 1959 by a group of Norwegian researchers led by Johan Galtung, who was also the institute's first director (1959–1969). It publishes the Journal of Peace Research, also founded by Johan Galtung.

Dr. Marianne Heiberg was director of the UN organization for aid to Palestinian refugees UNRWA field office in Jerusalem.

Jan Egeland is a Norwegian diplomat, political scientist, humanitarian leader and former Labour Party politician who has been Secretary General of the Norwegian Refugee Council since 2013. He served as State Secretary in the Norwegian Ministry of Foreign Affairs from 1990 to 1997 and as United Nations Undersecretary-General for Humanitarian Affairs and Emergency Relief Coordinator from 2003 to 2006. 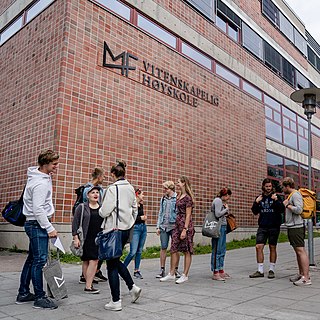 Hilde Henriksen Waage is a Norwegian historian and peace researcher. She is Professor of History at the University of Oslo and was acting Director of Peace Research Institute Oslo from 1992 to 1993. Waage is an expert on the Israeli–Palestinian conflict and Norway–Israel relations.

Sverre Lodgaard is a Norwegian political scientist who has held several senior positions within government and non-governmental organizations, including the Norwegian Institute of International Affairs (NUPI). Lodgaard specializes in peace, foreign and security policy, but has also worked on developing country issues. He has since the 2000s written extensively on nuclear arms control and disarmament issues and on Middle East affairs. 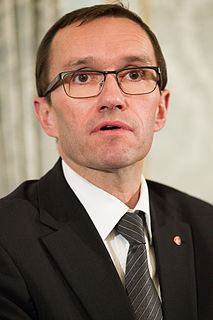 Lars Walløe is a Norwegian academic, chemist, physiologist, and scientific adviser to the Norwegian government. He was Head of Norwegian Delegation to the Scientific Committee of the International Whaling Commission (IWC); and he was honored by the government of Japan for having "Contributed to the promotion of Japan’s policy in the field of fisheries." From 2002 to 2008 Walløe served as the president of Academia Europaea.

Iver Brynild Neumann is a Norwegian political scientist and social anthropologist. He is Director of the Fridtjof Nansen Institute at Polhøgda, Lysaker, a position he has held since December 2019. From 2012-2017 he was the Montague Burton Professor of International Relations at the London School of Economics and Political Science. He has also served as Research Director and Director at the Norwegian Institute of International Affairs (NUPI) and Adjunct Professor in International Relations at the Norwegian University of Life Sciences.

Jakub M. Godzimirski is a Polish/Norwegian social anthropologist and international relations scholar. He is a Research Professor at the Norwegian Institute of International Affairs.

Henrik Thune is a Norwegian academic, writer and diplomat, who is the director of the Norwegian Center for Conflict Resolution (NOREF). He was previously a senior research fellow at the Norwegian Institute of International Affairs (NUPI) and head of its Middle East Programme.