Nubeluz was a Peruvian children's show airing from 1990 to 1996. [1] The show was produced by Peru's Panamericana Television and aired through its nationwide network (Channel 5 in Lima), who credit the General Production to Rochi Hernandez. The show was written by Alonso Alegria, Maritza Kirchhausen, Catalina Lohmann, Clara María Cavagnaro and Fernando Gagliuffi, and was usually hosted by two or three young girls called Dalinas (a possible portmanteau of "dama linda", or "pretty lady" in English).

Nubeluz's main contribution to the genre was the creation of an alternative world made of 'nube' (cloud) and 'luz' (light), with its own language, called 'glúfico', and its own peculiar manners and customs, where two weekly fiestas were held (the terms 'program' or 'show' were never used).

Nubeluz featured several competitions between children (and even adults on occasion) divided into two colored teams, always red and yellow, plus songs and dances, some with overt messages, performed by the Dalinas, interspersed with cartoons. The female back-up dancers were called Cíndelas, and the male back-up dancers were known as Gólmodis. The competition was also set to its own musical score, played in the background exclusively while competition was in progress. This musical score included an acoustic, instrumental remix of the song "Rock This Town" by the Stray Cats.

Numerous well-known singing groups, as well as other noted personalities, most of them well known in Latin America, made special guest appearances on the show at various times during its run. They performed their own songs or showed off their own talents. They frequently even experienced the show's competition first-hand during their guest appearance.

The show enjoyed great success and was soon broadcast in many Latin American countries. Moreover, it began to be broadcast to other countries, such as China, Turkey, Egypt, The Philippines, and the United States among others. However, the suicide of one of the main hostesses, Mónica Santa María, was a turning point that lead to its decline. [2] [3] The show finally ended in 1996. However, it was rebroadcast in other countries such as Venezuela with a whole new cast.

It has been confirmed that a pilot for a new version of the show was shot in March 2008 in Peru, having 4 new dalinas.

PLAK was the official magazine for Nubeluz.

Nubeluz was originally created for broadcast in Spanish and in Peru. In the mid-1990s an English-language pilot appeared, starring Monica Potter as the first American Dalina. The 1995 season also featured a character called Glufo, much like the American Barney the Dinosaur, who was large with rainbow colored fur, a loud distorted voice, and ears that wiggled. During its final two seasons, Nubeluz was relocated to Venezuela.

Dancing with the Stars is the name of various international television series based on the format of the British TV series Strictly Come Dancing, which is distributed by BBC Studios, the commercial arm of the BBC. Currently the format has been licensed to 60 territories.

Música criolla or canción criolla is a varied genre of Peruvian music that exhibits influences from European, African and Andean music. The genre's name reflects the coastal culture of Peru, and the local evolution of the term criollo, a word originally denoting high-status people of full Spanish ancestry, into a more socially inclusive element of the nation.

WKST-FM - branded as 96.1 KISS - is a Top 40 (CHR) outlet based in Pittsburgh, Pennsylvania. Owned by iHeartMedia, the station broadcasts at 96.1 MHz, with an ERP of 44 kW. Its transmitter is located in Baldwin, and its studios are located in Green Tree. 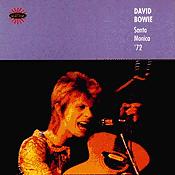 Santa Monica '72 is a live album by David Bowie, recorded at Santa Monica Civic Auditorium on 20 October 1972 during the Ziggy Stardust Tour. Taken from KMET FM's radio broadcast, it was available only as a bootleg for more than 20 years; according to author David Buckley, possessing a copy was the test of a "proper Bowie fan". The recording was issued semi-legally/officially and without Bowie's approval by the Golden Years label in 1994, with Griffin Music handling the American release in 1995.

Televen is a private Venezuelan national television network headquartered on the Caracas neighborhood of Horizonte. For this reason it is also called 'Canal de Horizonte'. Televen was inaugurated as the TELEVEN Corporation on July 10, 1988 by Omar Camero Zamora and T Radioven, S.A. As an alternative for the two-leading-private TV Networks on Venezuela, Radio Caracas Televisión (RCTV) and Venevision, Televen distanced itself from this trend and made a different oriented programming in some cases the middle classes who do not usually watch TV and it was open and being composed of talk shows, sports, movies, a full range of series, mainly American, and Brazilian, Colombian, Mexican, and U.S. Hispanic telenovelas, and in the 1990s, anime.

The Sal Premier Division is a regional championship played in Sal Island, Cape Verde. The winner of the championship plays in Cape Verdean football Championships of each season. The competition are organized by the Sal Regional Football Association. The Premier Divisions contains eight clubs. In title history, Académico do Aeroporto has the most titles numbering 14, and is ranked fifth in the most championship titles of any of the island leagues in Cape Verde. The champion promotes into the Cape Verdean Football Championships each season while the last placed club relegates into the second division the following season.

KTEG is a radio station broadcasting an alternative rock format. Licensed to Santa Fe, New Mexico, it serves the Albuquerque, Santa Fe and Northern New Mexico metropolitan area. The station is currently owned by iHeartMedia, Inc.. Its studios are located in Northeast Albuquerque and the transmitter tower is located west of Los Alamos, New Mexico.

KYLD is a commercial radio station in San Francisco, California, serving the San Francisco Bay Area and owned by iHeartMedia. The station airs a Mainstream Top 40 format on its analog primary signal. The station has studios located in the SoMa district of San Francisco, and the transmitter is located atop the San Bruno Mountains.

Mónica Janette Santa María Smith was a Peruvian model and TV hostess. She was born in Lima, Peru. From 1990 to early 1994, she co-hosted the Peruvian children's TV show Nubeluz.

The Peruvian version of Bailando por un Sueño premiered its first season on June 7, 2008, hosted by Gisela Valcárcel, who returned to Peruvian television after spending three years away. The programs, in a format called "galas", transmitted on Saturdays at 10 pm for Panamericana Television live from the Monitor Studios, located in the Lima district of San Borja.

KMEL is an Urban Contemporary radio station that is licensed to San Francisco, California and serving the San Francisco Bay Area. It is owned and operated by iHeartMedia.

Panamericana Televisión is a Peruvian television network, which was founded on July 21, 1957 and had later begun its official broadcast on October 16, 1959.

La Voz Peru is a Peruvian reality talent show that premiered on Frecuencia Latina in 2013. Based on the reality singing competition The Voice of Holland, the series was created by Dutch television producer John de Mol.

The Miss Perú 1996 pageant was held on April 12, 1996. That year, 25 candidates were competing for the national crown. The chosen winner represented Peru at the Miss Universe 1996. The rest of the finalists would enter in different pageants.

Following the dethronements of Anyella Grados and Tiffany Yoko Chong; the president of the Miss Peru Organization, Jessica Newton took the decision to organize a special edition of the Miss Peru 2019 pageant. The new format consisted of ten former contestants that had previous pageant experience whether at international or national level to compete for the national crown and to represent the country in other selected pageants.

This article lists events from the year 1972 in Peru.