Nyugat (Hungarian for West; pronounced similar to New-Got), was an important Hungarian literary journal in the first half of the 20th century. Writers and poets from that era are referred to as "1st/2nd/3rd generation of the NYUGAT".

Nyugat was founded in 1908 [1] and initially edited by Ignotus (Hugo Veigelsberg), Ernő Osvát, and Miksa Fenyő. [1] The magazine was receptive and inspired by the styles and philosophies then current in Western Europe, including naturalism, Symbolism, and impressionism. Nyugat published both poetry and prose writing.

During World War I, Nyugat, was challenged by leftist literary circles, particularly the grouping around Lajos Kassák who published first A Tett and then MA . This left Nyugat frustrated and depressed about the war.

Nyugat, the first Hungarian language periodical to discuss philosophers such as Nietzsche and Kierkegaard, had a significant impact upon scientists and intellectuals who became well known outside Hungary.

Kerepesi Cemetery is the most famous cemetery in Budapest. It is one of the oldest cemeteries in Hungary, and has been almost completely preserved.

Gyula Illyés born Gyula Illés was a Hungarian poet and novelist. He was one of the so-called népi writers, named so because they aimed to show – propelled by strong sociological interest and left-wing convictions – the disadvantageous conditions of their native land. 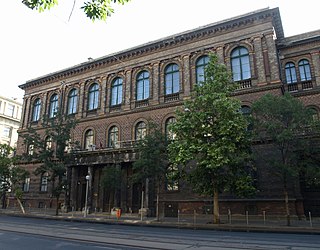 The Faculty of Humanities is the oldest faculty of Eötvös Loránd University and it is located in Trefort garden campus, Józsefváros, Budapest, Hungary. It was founded by, Cardinal Archbishop of Esztergom Prince Primate of Hungary, Péter Pázmány in 1635.