Operation Archway was the codename for one of the largest and most diverse operations carried out by the Special Air Service during the Second World War. [1]

Archway was initially intended to support Operation Plunder and Operation Varsity, the crossings of the River Rhine at Rees, Wesel, and south of the Lippe River by the British Second Army, under Lieutenant-General Sir Miles Dempsey. It went on to support the three British Armoured Divisions in their advance into Germany until the end of the war.

The Archway force was under command of Lieutenant Colonel Brian Franks and comprised two squadrons, one each from the 1st and 2nd Special Air Service.

Operation Archway was planned to support the XVIII Airborne Corps Operation Varsity parachute landings across the Rhine river. The force from the Special Air Service would be known as Frankforce. Named after the officer selected to command it, the commanding officer of 2nd Special Air Service, Lieutenant Colonel Brian Franks. Frankforce was made up of two reinforced Special Air Force squadrons, one each from the 1st and 2nd Special Air Service regiments. The force would number about 300 all ranks, mounted in 75 armed Jeeps, some also equipped with 3-inch mortars. They were supported by a number of 15-cwt and 3-ton trucks. [3] The 1st Special Air Service squadron was led by Major Poat and consisted of three troops, each consisting of three sections with three Jeeps. They had a 3 in. mortar section at Squadron Headquarters which also kept a reserve of 12 Jeeps. The 2nd SAS squadron under command Major Power had a similar composition but only two troops. [1]

Their first mission in support of the XVIII Airborne Corps consisted of reconnaissance patrols in northern Germany. They crossed the Rhine in amphibious LVT Buffalos, on the 25 March at Bislich. [4]

Frankforce was then assigned to support the British Guards Armoured Division in the area around the Dortmund–Ems Canal. After this, until the end of the war, Frankforce worked with the 2nd Welsh Guards, the 8th King's Royal Irish Hussars and the 15th/19th The King's Royal Hussars, who were the armoured reconnaissance regiments of the Guards, 7th and 11th Armoured Divisions. The Special Air Service Jeeps being a faster and lighter alternative to the Cromwell tanks used by the armoured regiments. [2] It was the 1st SAS squadron working with the 11th Armoured Division, who were among the first British troops into Bergen-Belsen concentration camp. [5] They found between 50,000 and 60,000 inmates in the camp and for several days later SAS patrols assisted the Field Security Police in hunting down war criminals making several arrests. [3] By the end of April 1945, they had reached the Elbe river, where they were joined by the Operation Keystone team, which was a squadron from 2nd SAS, under command of Major Hibbert. [6]

At the end of the war in Europe, both the 1st and 2nd Special Air Service regiments had returned to the United Kingdom in preparation to be redeployed to the Far East in the fight against the Japanese Empire. Before any training could start, both regiments together with the 1st Airborne Division were sent to disarm the German garrison in Norway Operation Doomsday. [7] In August 1945 the Special Air Service regiments returned home from Norway, [8] and in October 1945 they were officially disbanded. [9] The British Authorities of the time could see no further use for such a force. [9]

The Special Air Service (SAS) is a special forces unit of the British Army. The SAS was founded in 1941 as a regiment, and later reconstituted as a corps in 1950. The unit undertakes a number of roles including covert reconnaissance, counter-terrorism, direct action and hostage rescue. Much of the information and actions regarding the SAS is highly classified, and is not commented on by the British government or the Ministry of Defence due to the sensitivity of their operations. 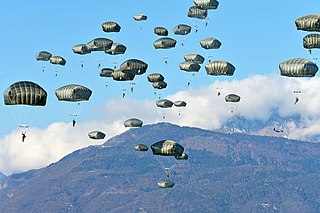 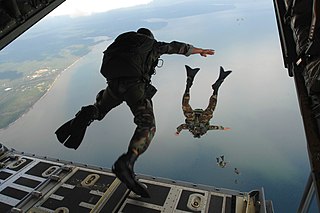 Airborne forces are military units moved by aircraft and "dropped" into battle, typically by parachute, almost anywhere with little warning. Formations are limited only by the number and size of their aircraft; a huge force can appear "out of nowhere" behind enemy lines in minutes, an action known as vertical envelopment.

A division is a large military unit or formation, usually consisting of between 10,000 and 25,000 soldiers.

The units of the British Army are commanded by the Chief of the General Staff. This is broadly similar to the structures of the Royal Navy and Royal Air Force, in that the four-star (general-equivalent) commanders-in-chief have been eliminated since 2011 and service chiefs are given direct command of their respective services are responsible as Top Level Budget (TLB) holders. Army Headquarters is located in Andover, Hampshire. There is a Commander Field Army and a personnel and UK operations command, Home Command. 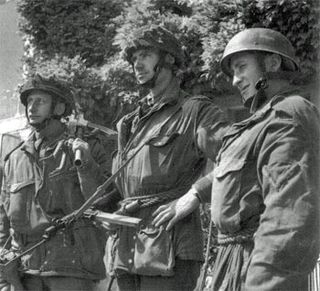 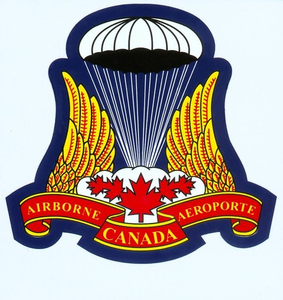 The Canadian Airborne Regiment was a Canadian Forces formation created on April 8, 1968. It was not an administrative regiment in the commonly accepted British Commonwealth sense, but rather a tactical formation manned from other regiments and branches. It was disbanded in 1995 after the Somalia Affair. 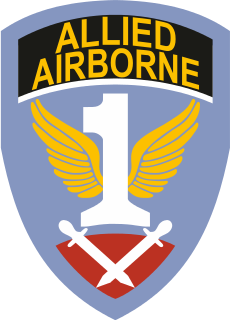 The First Allied Airborne Army was an Allied formation formed on 2 August 1944 by the order of General Dwight D. Eisenhower, the Supreme Allied Commander of the Allied Expeditionary Force. The formation was part of the Allied Expeditionary Force and controlled all Allied airborne forces in Western Europe from August 1944 to May 1945. These included the U.S. IX Troop Carrier Command, the U.S. XVIII Airborne Corps, which controlled the 17th, 82nd and 101st Airborne Divisions and a number of independent airborne units, all British airborne forces including the 1st and 6th Airborne Divisions plus the Polish 1st Parachute Brigade.

16 Air Assault Brigade is a formation of the British Army based in Colchester in the county of Essex. It is the Army's rapid response airborne formation and is the only brigade in the British Army focused on delivering air assault operations. 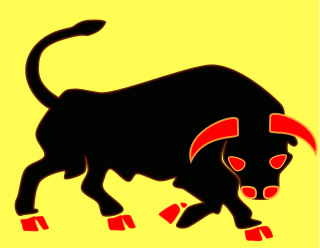 The 11th Armoured Division, also known as The Black Bull, was an armoured division of the British Army which was created in March 1941 during the Second World War. The division was formed in response to the unanticipated success of the German panzer divisions. The 11th Armoured was responsible for several major victories in the Battle of Normandy from in the summer of 1944, shortly after the D-Day landings of 6 June 1944, and it participated in the rapid advance across France, Belgium, and the Netherlands and, later, the Rhine crossing in March 1945, and later invaded Germany. It was disbanded in January 1946 and reformed towards the end of 1950. In 1956, it was converted into the 4th Infantry Division. 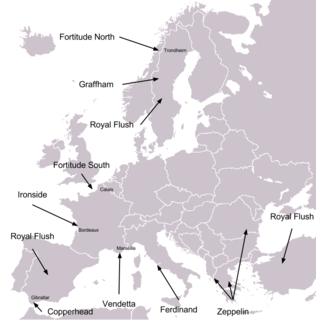 Operation Titanic was a series of military deceptions carried out by the Allied Nations during the Second World War. The operation formed part of Operation Bodyguard, the cover plan for the Normandy landings in 1944. Titanic was carried out on 5–6 June 1944 by the Royal Air Force and the Special Air Service. The objective of the operation was to drop 500 dummy parachutists in places other than the real Normandy drop zones, to deceive the German defenders into believing that a large force had landed, drawing their troops away from the beachheads and strategic sites such as Caen.

The Special Service Force is a designation used by a World War II Canadian-American formation, and also used by a Canadian Army formation from 1977 to 1995. 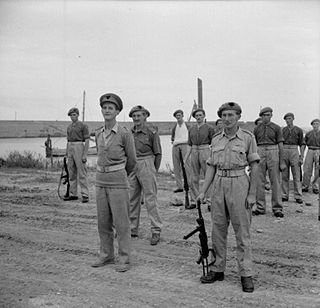 Major Roy Alexander Farran DSO, MC & Two Bars was a British soldier, politician, farmer, author and journalist. He was highly decorated for his exploits with the Special Air Service (SAS) during World War II. Farran became widely known after being court martialled on a charge of murdering an unarmed 16-year-old member of the Jewish underground militant group Lehi during his command of an undercover Palestine Police unit. After his brother was killed in a revenge attack, Farran emigrated to Canada where he forged a successful business and political career, holding a seat in the Legislative Assembly of Alberta from 1971 to 1979 sitting with the Progressive Conservative caucus. He served as a cabinet minister in the government of Premier Peter Lougheed during that period.

The special forces of the Australian Defence Force are units of Special Operations Command and associated units of the Royal Australian Navy and the Royal Australian Air Force that conduct and or support special operations to advance and protect the national security of the Commonwealth of Australia. The special forces of Australia have a lineage to a variety of units raised in the Second World War such as the Independent and Commando Companies, Z Special Unit, Navy Beach Commandos, and the Coastwatchers. Australian special forces have most recently been deployed to Iraq in Operation Okra as the Special Operations Task Group, as the Special Operations Task Group in Afghanistan, in Afghanistan in support of the Australian Secret Intelligence Service and regularly for counter-terrorism pre-deploy to locations of major domestic events throughout Australia in readiness to support law enforcement such as the 2014 G20 Brisbane summit.

The Special Operations Regiment, formerly the Light Brigade, is a Regiment of the Land Component of the Belgian Armed Forces. Its headquarters is located in Heverlee. Known until 3 July 2018 as the Light Brigade the regiment is Belgium's special operations and rapid response unit.

The Sacred Band or Sacred Squadron was a Greek special forces unit formed in 1942 in the Middle East, composed entirely of Greek officers and officer cadets under the command of Col. Christodoulos Tsigantes. It fought alongside the SAS in the Western Desert and the Aegean, as well as with General Leclerc's Free French Forces in Tunisia. It was disbanded in August 1945 but is the precursor of the modern Greek Special Forces.

GHQ Liaison Regiment was a special reconnaissance unit first formed in 1939 during the early stages of World War II. The regiment's headquarters were at The Richmond Hill Hotel in Richmond, Surrey ; its base was at Pembroke Lodge, a Georgian house in Richmond Park, London. 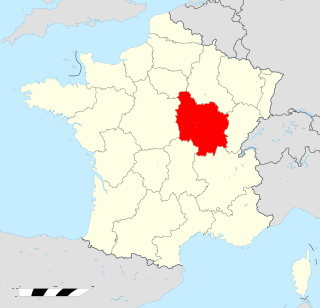 Operation Houndsworth was the codename for a British Special Air Service operation during the Second World War. The operation carried out by 'A' Squadron, 1st Special Air Service between 6 June and 6 September 1944, was centred on Dijon in the Burgundy region of France. Their objective was to disrupt German lines of communication, coordinate the activities of the French Resistance and prevent German reinforcements moving to the Normandy beachheads, especially the 2nd SS Panzer Division Das Reich.

The Northern Army Group (NORTHAG) was a NATO military formation comprising four Western European Army Corps, during the Cold War as part of NATO's forward defence in the Federal Republic of Germany. 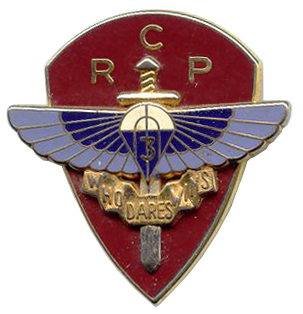 The 3rd Parachute Chasseur Regiment or 3e RCP was a French unit of Second World War known in the British Army as the 3rd SAS Regiment and originally named the 3rd Air Infantry Battalion. Involved in the operations of the Liberation of France and The Netherlands, the unit was temporarily dissolved at the end of the conflict and was reorganized between 1979 and 1998.