In wrought ironwork, the overthrow, particularly popular in the Baroque era commencing in the 17th century, refers to the crowning section of ornamental wrought ironwork which forms a decorative crest above a wrought-iron gate; the overthrow provides some stabilizing structure tying together supporting piers on either side of the swinging sections. The piers may be masonry or of assembled sections of wrought iron. Aside from this stabilizing feature, the overthrow was largely freed of constraints of barring passage of animals or people. Consequently, the iron master was free to express his fancy. Overthrows often feature monograms or cyphers, armorial crests or supporters, and even fully realized coats of arms.

Wrought iron is an iron alloy with a very low carbon content in contrast to cast iron. It is a semi-fused mass of iron with fibrous slag inclusions, which gives it a "grain" resembling wood that is visible when it is etched or bent to the point of failure. Wrought iron is tough, malleable, ductile, corrosion-resistant and easily welded. Before the development of effective methods of steelmaking and the availability of large quantities of steel, wrought iron was the most common form of malleable iron. It was given the name wrought because it was hammered, rolled or otherwise worked while hot enough to expel molten slag. The modern functional equivalent of wrought iron is mild or low carbon steel. Neither wrought iron nor mild steel contain enough carbon to be hardenable by heating and quenching. 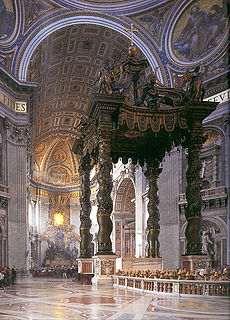 The Baroque is a highly ornate and often extravagant style of architecture, music, dance, painting, sculpture and other arts that flourished in Europe from the early 17th until the mid-18th century. It followed the Renaissance style and preceded the Rococo and Neoclassical styles. It was encouraged by the Catholic Church as a means to counter the simplicity and austerity of Protestant architecture, art and music, though Lutheran Baroque art developed in parts of Europe as well. The Baroque style used contrast, movement, exuberant detail, deep colour, grandeur and surprise to achieve a sense of awe. The style began at the start of the 17th century in Rome, then spread rapidly to France, northern Italy, Spain and Portugal, then to Austria and southern Germany. By the 1730s, it had evolved into an even more flamboyant style, called rocaille or Rococo, which appeared in France and central Europe until the mid to late 18th century. 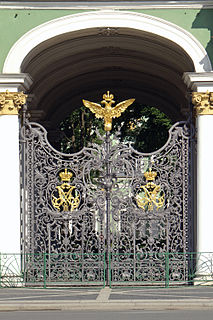 Ironwork is any weapon, artwork, utensil or architectural feature made of iron especially used for decoration. There are two main types of ironwork: wrought iron and cast iron. While the use of iron dates as far back as 4000BC, it was the Hittites who first knew how to extract it and develop weapons. Use of iron was mainly utilitarian until the Middle Ages, it became widely used for decoration in the period between the 16th and 19th century.

Some outstanding English and Welsh examples of overthrows:

Chirk Castle is a Grade I listed castle located at Chirk, near Wrexham, Wales.

Jean Tijou was a French Huguenot ironworker. He is known solely through his work in England, where he worked on several of the key English Baroque buildings. Very little is known of him biographically. He arrived in England in c.1689 and enjoyed the patronage of William III and Mary II. He left England for the continent c.1712 He was father-in-law to Louis Laguerre who married in St Martin-in-the-Fields. 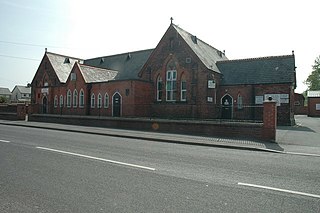 Leeswood is a small village, community and electoral ward in Flintshire, Wales, about four miles from the historic market town of Mold. At the 2001 Census, the population was 2,143, reducing slightly to 2,135 at the 2011 Census. 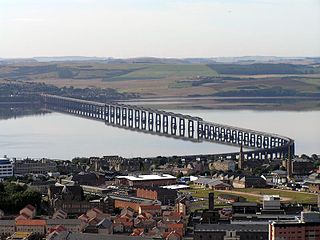 The Tay Bridge carries the railway across the Firth of Tay in Scotland between Dundee and the suburb of Wormit in Fife. Its span is 2.75 miles. It is the second bridge to occupy the site.

Overthrow may refer to: 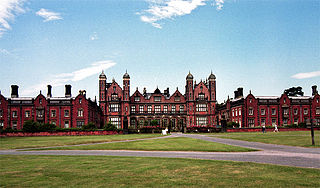 Robert Bakewell was an English smith. He took an apprenticeship in London as an iron worker and became an extremely skilled ironsmith.

Okeover Hall is a privately owned Grade II* listed country house in Staffordshire. It is the family seat of the Okeover family, who have been in residence since the reign of William Rufus. The house lies close to the border between Staffordshire and Derbyshire, which lies on the far side of the small River Dove. The Hall is not open to the public.

A gatepost is a structure used to support gates or crossbars which control entry to an area, such as a field or driveway.

Holy Trinity Chapel is a private chapel adjacent to Capesthorne Hall, near the village of Siddington, Cheshire, England. It is recorded in the National Heritage List for England as a designated Grade II* listed building. It is an Anglican church in the diocese of Chester, the archdeaconry of Macclesfield and the deanery of Macclesfield. Its benefice is combined with those of St James and St Paul, Marton, Christ Church, Eaton, and All Saints, Siddington.

St Peter's Church is in Chapel Street, Congleton, Cheshire, England. It is recorded in the National Heritage List for England as a designated Grade I listed building. It is an active Anglican parish church in the Diocese of Chester, the archdeaconry of Macclesfield and the deanery of Congleton. Its benefice is combined with those of St Stephen, Congleton, St John the Evangelist, Buglawton, and Holy Trinity, Mossley. Alec Clifton-Taylor includes it in his list of 'best' English parish churches.The Church Buildings Council included St Peter`s in its group of 300 Major Parish Churches following research produced in 2016. [Pursell 2016] 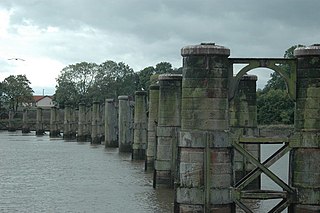 The Alloa Swing Bridge was a railway swing bridge across the River Forth that connected Throsk and Alloa as part of the Alloa Railway. The structure was in use until 1968 and was demolished in 1971.

William Hazledine was an English ironmaster. Establishing large foundries, he was a pioneer in casting structural ironwork, most notably for canal aqueducts and early suspension bridges. Many of these projects were collaborations with Thomas Telford, including the Pontcysyllte Aqueduct and the Menai Suspension Bridge.

The Saracen Foundry was the better-known name for the Possilpark, Glasgow–based foundry company W MacFarlane & Co. Ltd, founded and owned by Walter MacFarlane. MacFarlane's was the most important manufacturer of ornamental ironwork in Scotland.

The Davies brothers of Bersham, near Wrexham in north Wales, were a family of smiths active in the 18th century. They were particularly known for their high-quality work in wrought iron, of which several examples still survive in country homes and churchyards around the England-Wales border.

The Boake Gates at Royal College Colombo are three entrances to the main building along Rajakeeya Mawatha in Colombo. Erected in 1938, the gates stand as a symbol for the college's traditions and culture. 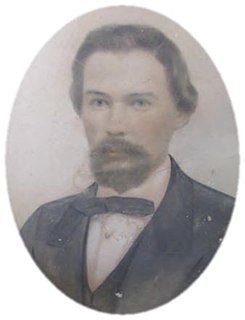 Christopher W. Werner (1805–1875) was a nineteenth-century wrought iron manufacturer, artisan, and entrepreneur based in Charleston, South Carolina, US. He was one of three noted German-American ironworkers in Charleston, who created most of its high-quality wrought iron. He had immigrated from Prussia in his late 20s, already an accomplished businessman. In Charleston he married a young woman from England, another immigrant, and they had a family. 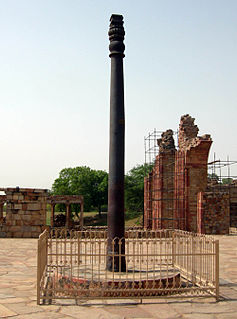 Iron, steel, and ferrous metals constitute a large portion of collections in museums. The conservation and restoration of iron and steel objects is an activity dedicated to the preservation and protection of objects of historical and personal value made from iron or steel. When applied to cultural heritage this activity is generally undertaken by a conservator-restorer. Historically, objects made from iron or steel were created for religious, artistic, technical, military and domestic uses. Though it is generally not possible to completely halt deterioration of any object, the act of conservation and restoration strives to prevent and slow the deterioration of the object as well as protecting the object for future use. One of the first steps in caring for iron is to examine them and determine their state, determine if they are corroding, and consider options for treatment. 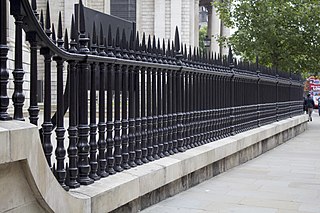 An iron railing is a fence made of iron. This may either be wrought iron, which is ductile and durable and may be hammered into elaborate shapes when hot, or the cheaper cast iron, which is of low ductility and quite brittle. Cast iron can also produce complicated shapes, but these are created through the use of moulds of compressed sand rather than hammering, which would be likely to damage the iron.

Thomas Hadden (1871–1940) was a Scottish maker of ornamental ironwork from wrought iron, particularly for the architect Robert Lorimer.