Pancreatic Cancer Action is a not-for-profit organisation based in the UK whose mission is to raise awareness of pancreatic cancer.

Founded by Ali Stunt, who is herself a rare survivor of the disease, [1] Pancreatic Cancer Action is dedicated to saving lives. The five-year survival rate for pancreatic cancer is only around 5% – this figure has not improved in over 40 years.

Pancreatic cancer is the fifth-commonest cause of cancer death in the UK yet receives only 1% of research funding. [2] Only 10% of patients with a diagnosis of pancreatic cancer are able to have potentially curative surgery. [3] [4]

One focus is the annual UK Pancreatic Cancer Awareness Month held in November each year. 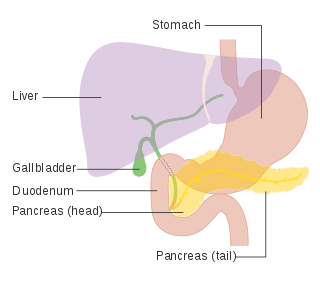 Surgical oncology is the branch of surgery applied to oncology; it focuses on the surgical management of tumors, especially cancerous tumors.

A pancreaticoduodenectomy, also known as a Whipple procedure, is a major surgical operation most often performed to remove cancerous tumours off the head of the pancreas. It is also used for the treatment of pancreatic or duodenal trauma, or chronic pancreatitis. Due to the shared blood supply of organs in the proximal gastrointestinal system, surgical removal of the head of the pancreas also necessitates removal of the duodenum, proximal jejunum, gallbladder, and, occasionally, part of the stomach.

The Norris Cotton Cancer Center is a comprehensive cancer center as designated by the National Cancer Institute, with administrative offices located within the Dartmouth-Hitchcock Medical Center in Lebanon, New Hampshire.

The European Organisation for Research and Treatment of Cancer (EORTC) is a unique pan-European non-profit clinical cancer research organisation established in 1962 operating as an international association under Belgium law. It develops, conducts, coordinates and stimulates high-quality translational and clinical trial research to improve the survival and quality of life of cancer patients. This is achieved through the development of new drugs and other innovative approaches, and the testing of more effective therapeutic strategies, using currently approved drugs, surgery and/or radiotherapy in clinical trials conducted under the auspices of a vast network of clinical cancer researchers supported by 220 staff members based in Brussels. EORTC has the expertise to conduct large and complex trials especially specific populations such as the older patient and rare tumours.

The Royal Surrey County Hospital (RSCH) is a 520-bed District General Hospital, located on the fringe of Guildford, run by the Royal Surrey NHS Foundation Trust.

James Lewis Abbruzzese is the Chief of the Duke Division of Medical Oncology and Associate Director for Clinical Research for the Duke Cancer Institute. Previously, Abbruzzese was Chairman of the Department of Gastrointestinal Medical Oncology at the University of Texas M. D. Anderson Cancer Center where he held the M. G. and Lillie A. Johnson Chair for Cancer Treatment and Research and the Annie Laurie Howard Research Distinguished Professorship. Abbruzzese is one of the world's leaders in the clinical study and treatment of pancreatic cancer.

Jonathan J. Lewis, M.D., Ph.D., is a surgeon, biomedical researcher and entrepreneur. He was trained in surgery in South Africa, Britain, and the United States, and is a fellow of both the Royal College of Surgeons and the American College of Surgeons. Dr. Lewis was awarded an MB.B.Ch. from University of the Witwatersrand School of Medicine, and his Ph.D. in Molecular Biology from Witwatersrand and Yale School of Medicine. He completed his Surgical Residency at Charlotte Maxeke Johannesburg Academic Hospital and at Yale-New Haven Hospital. Lewis was a Professor of Surgery and Medicine Memorial Sloan-Kettering Cancer Center, before working in the biotechnology industry, first as chief medical officer of RubyConn, then as chairman and chief executive officer of ZIOPHARM Oncology, Inc. He was chief executive officer of Samus Therapeutics and is currently chairman of the Molecular Ninja Group and chief executive officer of Varian Biopharma.

Christopher M. Nutting is a British Professor of Clinical Oncology and medical consultant, specializing in head and neck cancers, who has helped develop Intensity-Modulated Radiotherapy (IMRT), an advanced form of Radiation therapy.

Rajendra Achyut Badwe, is an Indian medical doctor and surgical oncologist. He was honoured by the Government of India, in 2013, by bestowing on him the Padma Shri, the fourth highest civilian award, for his contributions to the field of medicine.

Steven Clark Cunningham is an American surgeon. He is known for dealing with medical conditions relating to pancreatic, biliary, and liver surgery.

Darab Jehangir Jussawala (1915–1999) was an Indian medical-cum-surgical oncologist, medical writer and the director of Tata Memorial Centre. He was the co-founder of Indian Cancer Society, along with Naval Tata in 1951, and the founder of the Indian Cancer Rehabilitation Centre in Parel, Mumbai, in 1956, the first such centre in India and the largest in Asia. He served as the director of Lady Ratan Tata Medical and Research Center and as the honorary consultant at two Mumbai hospitals, Breach Candy Hospital and Jaslok Hospital. An elected fellow of the Royal Society of Medicine, National Academy of Medical Sciences, Indian Academy of Sciences, Indian National Science Academy and the American College of Surgeons, he was a recipient of the Dhanwantari Award as well as several Oration Awards. The Government of India awarded him the third highest civilian honour of the Padma Bhushan, in 1975, for his contributions to Medicine.

Andrew Victor Biankin is a Scotland-based Australian clinician-scientist, best known for his work on enabling precision oncology in learning healthcare systems by integrating discovery, preclinical and clinical development to accelerate novel therapeutic strategies, and developing standardised pan-cancer assays for use by healthcare systems and researchers worldwide.

Patrick Stewart Boulter FRCS, FRCSEd was a general surgeon in Guildford, England. He developed a sub-speciality interest in breast surgery and was one of the pioneers in the UK of screening for breast cancer. He served as president of the Royal College of Surgeons of Edinburgh from 1991 to 1994.

Emilia Dauway MD, FACS, FRACS is an American trained surgeon who is practicing general, breast and oncologic surgery in Australia. Dauway was co-inventor of the use of radioactive seeds in the breast to localise non-palpable breast cancers and the first in Australia to use magnetic seeds instead of radioactive seeds. This technique replaces hookwire or needle localisation improving patient safety, outcomes and satisfaction. The method was patented by the University of South Florida while Dauway was a fellow of surgical oncology. The method has been used since 1999 and has improved with the development of modern equipment. Dauway is also a Yoga Instructor, a Keynote speaker and is founder/director of Restore More, a non-profit initiative which provides education and funding to women in regional and geographically disadvantaged areas for breast cancer treatment and reconstruction.