He has been training since 1981, having previously worked as an assistant to François Boutin. He is based at Chantilly, Oise. 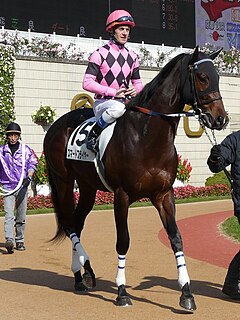 The Prix Marcel Boussac is a Group 1 flat horse race in France open to two-year-old thoroughbred fillies. It is run at Longchamp over a distance of 1,600 metres, and it is scheduled to take place each year in early October.

Six Perfections is a champion Thoroughbred race horse, bred by the Niarchos family. She is best known for her 2003 win in the Breeders' Cup Mile. 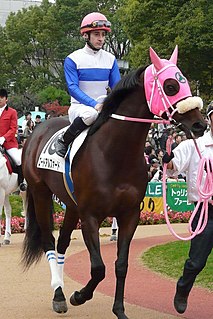 Sylvain Guillot is a French jockey. He is married to the sister of fellow jockey Yannick Fouin and has one son, Thomas.

El Condor Pasa was an American-bred, Japanese-trained Thoroughbred racehorse. In 1998 he won the NHK Mile Cup and the Japan Cup. In the following year he was campaigned in Europe where he won the Grand Prix de Saint-Cloud and the Prix Foy before finishing second in the Prix de l'Arc de Triomphe. He was retired to stud but died after three seasons following unsuccessful colic surgery. El Condor Pasa has been described as the best Japanese racehorse of the 20th century.

Mastery is a British Thoroughbred racehorse. In a racing career which lasted from October 2008 until 2010 he ran thirteen times and won five races. As a three-year-old in 2009 he won the Derby Italiano and the St Leger. In 2010 he won the Hong Kong Vase.

Carnegie was a British-bred, French-trained Thoroughbred racehorse and sire. Unraced as a two-year-old he won four consecutive races as a three-year-old in 1994, culminating with a win in the Prix de l'Arc de Triomphe. He remained in training as a four-year-old, winning the Grand Prix de Saint-Cloud and Prix Foy. He was then retired to stud and had some success as a sire of winners in Australia and New Zealand.

Gloria de Campeao is a retired Brazilian Thoroughbred racehorse that is best known for his victory in the 2010 Dubai World Cup. He has also run on 4 continents and won on 3 of them.