Peel Croft was a sports ground in Burton upon Trent in England. It was the home ground of Burton Rugby Football Club and the Burton Swifts and Burton United football clubs, who played in the Football League between 1892 and 1907.

Currently there are plans to build a Lidl on the site after the supermarket chain bought the land in 2019. The new store is expected to be open in 2021. [1]

Peel Croft was originally the home ground of Burton RFC, before being bought by the Burton Swifts football club in 1890. [2] A new grandstand was built on the north side of the ground, and a fence was built around the ground to enclose it. It was officially opened as a football stadium on 2 September 1891 with a friendly match against Derby County. [2] Further improvements were made the ground, including a covered stand behind the goal at the western end of the ground, an embankment at the east end, and a terrace along the southern touchline. [2] Swifts became members of the Football League in 1892, and the crowd of 5,500 who attended an FA Cup match between Swifts and local rivals Burton Wanderers on 10 December that year was probably the ground's record attendance. [2]

In 1901 Swifts and Wanderers merged to form Burton United, with the new club using Peel Croft as their home ground. The grandstand burnt down on 29 March 1907, but by the time a new 600-seat stand was opened on 21 September, United had been voted out of the Football League. They eventually folded in 1910, after which the ground was taken over again by Burton RFC. [2] The 600-seat stand and original terracing (which has since had a roof added) are still features of the ground. [2]

In 2017, it was announced that Burton RFC will be moving to a new stadium in nearby Tatenhill, with Peel Croft being demolished and replaced with a retail park. [3]

Burton United Football Club was a football club based in Burton upon Trent in England. The club was established in 1901 by a merger of Burton Swifts and Burton Wanderers, and played their last competitive season in 1910. In 1924 they merged with Burton All Saints continuing the lineage of the history of football in Burton, while at the same time legally ending the club. Between 1901 and 1907 the club were members of the Football League. 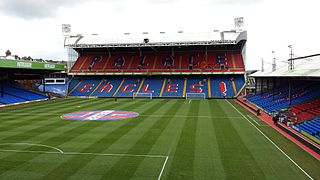 Selhurst Park is a football stadium in Selhurst in the London Borough of Croydon which is the home ground of Premier League side Crystal Palace. The stadium was designed by Archibald Leitch and opened in 1924. It has hosted international football as well as games for the 1948 Summer Olympics, and was shared by Charlton Athletic from 1985 to 1991 and Wimbledon from 1991 to 2003. 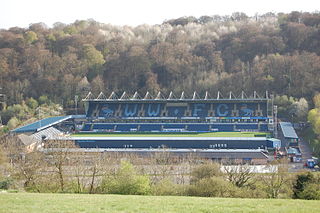 Netherdale is a sports complex in Galashiels, Scottish Borders, consisting of two adjacent stadiums used for rugby union and football. The rugby ground is the home of Gala RFC and was formerly used by the professional Border Reivers team. It hosted one match of the 1999 Rugby World Cup. It has also occasionally been used for rugby league matches. The football ground is home to Gala Fairydean Rovers and has a Category A listed grandstand.

Burton Wanderers Football Club was a football club based in Burton upon Trent, Staffordshire, England. The club were members of the Football League for three seasons in the mid 1890s. In 1901 they merged with Burton Swifts to form Burton United. The club played at Derby Turn.

Burton Swifts Football Club was a football club based in Burton upon Trent, England. Established in 1871, the club joined the Football League in 1892, remaining members until merging with Burton Wanderers to form Burton United in 1901. 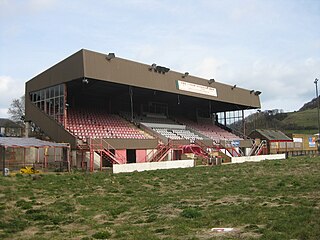 The Athletic Ground, latterly known as the McCain Stadium, was a football stadium located on Seamer Road in Scarborough, North Yorkshire, England. It was the home of Scarborough F.C., a defunct football club who last played in the English Conference North before they were dissolved on 20 June 2007 with debts of £2.5 million. 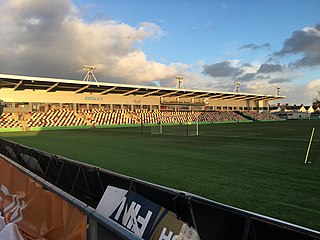 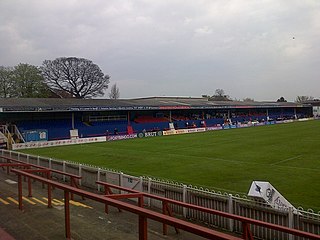 The Recreation Ground and for sponsorship reasons the LEL Arena is a rugby league stadium in Whitehaven, Cumbria, England. It is the home of Whitehaven R.L.F.C.. 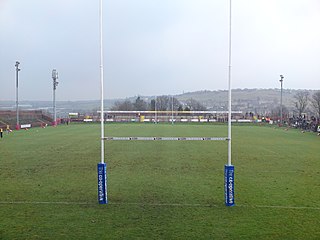 Mount Pleasant stadium, officially known for commercial sponsorship purposes as Fox's Biscuits Stadium, is a rugby league stadium in Batley, West Yorkshire, England. It is the home of Batley Bulldogs.

Derby Turn was a football and athletics stadium in Burton upon Trent in England. It was the home ground of Burton Wanderers, who played in the Football League during the mid-1890s, and was also used to host athletics meetings. 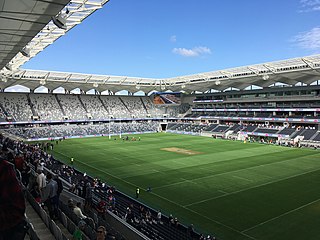