Penspen is a provider of engineering and management services to the oil and gas industry based in London, [1] United Kingdom. Its chief executive officer is Peter O'Sullivan. [2]

The company has conducted the front-end engineering design for the Greece–Italy [3] [4] and Nabucco [5] pipelines, feasibility studies for the Trans-Saharan gas pipeline [6] and Azerbaijan–Georgia–Romania Interconnector, [7] developed integrity policies and procedures for Pemex. [8]

In 2007–2012, Penspen in cooperation with Manchester Jetline and Newcastle University researched the feasibility of using trained dogs to detect leaks in pipelines. [9]

Blue Stream is a major trans-Black Sea gas pipeline that carries natural gas from Russia into Turkey. The pipeline has been constructed by the Blue Stream Pipeline B.V., the Netherlands based joint venture of Russian Gazprom and Italian Eni. The Blue Stream Pipeline B.V. is an owner of the subsea section of pipeline, including Beregovaya compressor station, while Gazprom owns and operates the Russian land section of the pipeline and the Turkish land section is owned and operated by the Turkish energy company BOTAŞ. According to Gazprom the pipeline was built with the intent of diversifying Russian gas delivery routes to Turkey and avoiding third countries.

The Nabucco pipeline was a project of the natural gas pipeline from Erzurum in Turkey to Baumgarten an der March in Austria to diversify natural gas suppliers and delivery routes for Europe. The pipeline was to lessen European dependence on Russian energy. The project was backed by several European Union states and the United States and was seen as rival to the Gazprom-Eni South Stream pipeline project. The main supplier was to be Iraq with potential supplies from Azerbaijan, Turkmenistan, and Egypt.

AMBO pipeline was a planned oil pipeline from the Bulgarian Black Sea port of Burgas via the Republic of Macedonia to the Albanian Adriatic port of Vlorë.

GALSI is a planned natural gas pipeline from Algeria to Sardinia and further northern Italy. 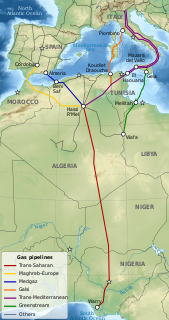 The Greenstream pipeline, part of the Western Libyan Gas Project, is a natural gas submarine pipeline running from western Libya to the island of Sicily in Italy.

The Trans-Mediterranean Pipeline is a natural gas pipeline from Algeria via Tunisia to Sicily and thence to mainland Italy. An extension of the TransMed pipeline delivers Algerian gas to Slovenia.

The West African Gas Pipeline (WAGP) is a natural gas pipeline to supply gas from Nigeria's Escravos region of the Niger Delta area to Benin, Togo and Ghana. It is the first regional natural gas transmission system in sub-Saharan Africa. 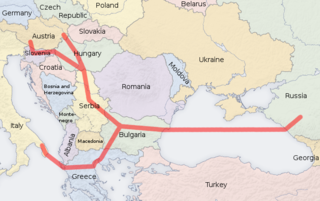 South Stream was a pipeline project to transport natural gas of the Russian Federation through the Black Sea to Bulgaria and through Serbia, Hungary and Slovenia further to Austria.

Trans Adriatic Pipeline (TAP) is a pipeline that transports natural gas from Azerbaijan at the Caspian Sea to Europe starting from Greece through Albania and the Adriatic Sea to Italy. It is a European section of the Southern Gas Corridor.

This page summarizes projects that propose to bring more than 20,000 barrels per day (3,200 m3/d) of new liquid fuel capacity to market with the first production of fuel beginning in 2014. This is part of the Wikipedia summary of Oil Megaprojects.

Chirag is an offshore oil field in the Caspian Sea, located 120 km (75 mi) east of Baku, Azerbaijan and is a part of the larger Azeri-Chirag-Guneshli (ACG) project. The production, drilling and quarters (PDQ) platform Chirag 1 (EOP) has been in operation since 1997. Chirag 1 has been producing the Early Oil from the ACG field. West Chirag is planned as an extension of ACG project.

Habshan–Fujairah oil pipeline, also known as "Abu Dhabi Crude Oil Pipeline (ADCOP)", is an oil pipeline in the United Arab Emirates. It starts from the Habshan onshore field in Abu Dhabi and runs to Fujairah on the Gulf of Oman.

The North Sea Link is a 1,400 MW subsea high-voltage direct current electricity cable under construction between Norway and the United Kingdom. When completed, it will be the longest subsea interconnector in the world.

The South East Europe Pipeline was a proposal for a natural gas pipeline from eastern Turkey to Baumgarten an der March in Austria. It was seen as an option for diversification of natural gas potential delivery routes for Europe from Azerbaijan. The pipeline would allow Azerbaijan to supply Europe with 10 billion cubic metres of natural gas a year. The main source of the gas would be Shah Deniz gas field when its second stage comes online.

The Trans-Anatolian Natural Gas Pipeline is a natural gas pipeline in Turkey. It is the central part of the Southern Gas Corridor, which connects the giant Shah Deniz gas field in Azerbaijan to Europe through the South Caucasus Pipeline and the Trans Adriatic Pipeline. The pipeline has a strategic importance for both Azerbaijan and Turkey. It allows the first Azerbaijani gas exports to Europe, beyond Turkey. It also strengthens the role of Turkey as a regional energy hub.

The Interconnector Turkey–Greece–Italy (ITGI) is a natural gas transportation project proposed in the framework of the Southern Gas Corridor. It was proposed for the transportation of natural gas from Azerbaijan's Shah Deniz gas field Phase II to markets in Europe via Greece and Italy. The Turkey–Greece pipeline was completed in 2007 while the future of the Greece–Italy pipeline project is unclear due to the competing Trans Adriatic Pipeline.