Probability matching is a decision strategy in which predictions of class membership are proportional to the class base rates. Thus, if in the training set positive examples are observed 60% of the time, and negative examples are observed 40% of the time, then the observer using a probability-matching strategy will predict (for unlabeled examples) a class label of "positive" on 60% of instances, and a class label of "negative" on 40% of instances.

The optimal Bayesian decision strategy (to maximize the number of correct predictions, see Duda, Hart & Stork (2001)) in such a case is to always predict "positive" (i.e., predict the majority category in the absence of other information), which has 60% chance of winning rather than matching which has 52% of winning (where p is the probability of positive realization, the result of matching would be

). The probability-matching strategy is of psychological interest because it is frequently employed by human subjects in decision and classification studies (where it may be related to Thompson sampling).

In artificial intelligence, Thompson sampling, named after William R. Thompson, is a heuristic for choosing actions that addresses the exploration-exploitation dilemma in the multi-armed bandit problem. It consists in choosing the action that maximizes the expected reward with respect to a randomly drawn belief.

The only case when probability matching will yield same results as Bayesian decision strategy mentioned above is when all class base rates are the same. So, if in the training set positive examples are observed 50% of the time, then the Bayesian strategy would yield 50% accuracy (1 × .5), just as probability matching (.5 ×.5 + .5 × .5).

In machine learning, naive Bayes classifiers are a family of simple "probabilistic classifiers" based on applying Bayes' theorem with strong (naive) independence assumptions between the features. 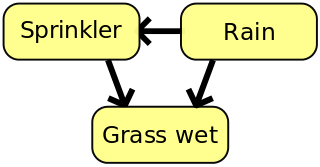 Binary or binomial classification is the task of classifying the elements of a given set into two groups on the basis of a classification rule. Contexts requiring a decision as to whether or not an item has some qualitative property, some specified characteristic, or some typical binary classification include:

In computer science, Decision tree learning uses a decision tree to go from observations about an item to conclusions about the item's target value. It is one of the predictive modeling approaches used in statistics, data mining and machine learning. Tree models where the target variable can take a discrete set of values are called classification trees; in these tree structures, leaves represent class labels and branches represent conjunctions of features that lead to those class labels. Decision trees where the target variable can take continuous values are called regression trees.

In the field of machine learning and specifically the problem of statistical classification, a confusion matrix, also known as an error matrix, is a specific table layout that allows visualization of the performance of an algorithm, typically a supervised learning one. Each row of the matrix represents the instances in a predicted class while each column represents the instances in an actual class. The name stems from the fact that it makes it easy to see if the system is confusing two classes. 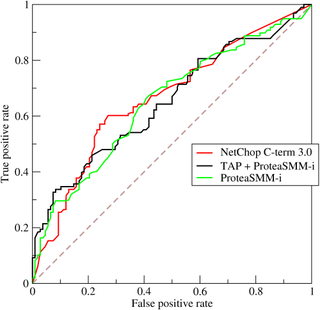 A receiver operating characteristic curve, or ROC curve, is a graphical plot that illustrates the diagnostic ability of a binary classifier system as its discrimination threshold is varied.

In machine learning and statistics, classification is the problem of identifying to which of a set of categories (sub-populations) a new observation belongs, on the basis of a training set of data containing observations whose category membership is known. Examples are assigning a given email to the "spam" or "non-spam" class, and assigning a diagnosis to a given patient based on observed characteristics of the patient. Classification is an example of pattern recognition.

In decision theory, a score function, or scoring rule, measures the accuracy of probabilistic predictions. It is applicable to tasks in which predictions must assign probabilities to a set of mutually exclusive outcomes. The set of possible outcomes can be either binary or categorical in nature, and the probabilities assigned to this set of outcomes must sum to one. A score can be thought of as either a measure of the "calibration" of a set of probabilistic predictions, or as a "cost function" or "loss function".

The Matthews correlation coefficient is used in machine learning as a measure of the quality of binary (two-class) classifications, introduced by biochemist Brian W. Matthews in 1975. It takes into account true and false positives and negatives and is generally regarded as a balanced measure which can be used even if the classes are of very different sizes. The MCC is in essence a correlation coefficient between the observed and predicted binary classifications; it returns a value between −1 and +1. A coefficient of +1 represents a perfect prediction, 0 no better than random prediction and −1 indicates total disagreement between prediction and observation. The statistic is also known as the phi coefficient. MCC is related to the chi-square statistic for a 2×2 contingency table

Not to be confused with multi-label classification. 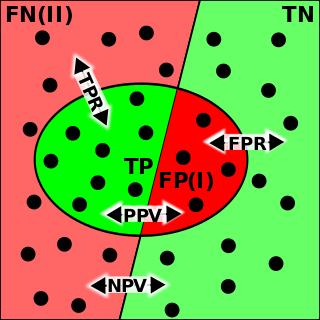 In machine learning, multiple-instance learning (MIL) is a type of supervised learning. Instead of receiving a set of instances which are individually labeled, the learner receives a set of labeled bags, each containing many instances. In the simple case of multiple-instance binary classification, a bag may be labeled negative if all the instances in it are negative. On the other hand, a bag is labeled positive if there is at least one instance in it which is positive. From a collection of labeled bags, the learner tries to either (i) induce a concept that will label individual instances correctly or (ii) learn how to label bags without inducing the concept.

The City of New York, usually called either New York City (NYC) or simply New York (NY), is the most populous city in the United States. With an estimated 2018 population of 8,398,748 distributed over a land area of about 302.6 square miles (784 km2), New York is also the most densely populated major city in the United States. Located at the southern tip of the state of New York, the city is the center of the New York metropolitan area, the largest metropolitan area in the world by urban landmass and one of the world's most populous megacities, with an estimated 20,320,876 people in its 2017 Metropolitan Statistical Area and 23,876,155 residents in its Combined Statistical Area. A global power city, New York City has been described as the cultural, financial, and media capital of the world, and exerts a significant impact upon commerce, entertainment, research, technology, education, politics, tourism, art, fashion, and sports. The city's fast pace has inspired the term New York minute. Home to the headquarters of the United Nations, New York is an important center for international diplomacy.