A process control block (PCB) is a data structure used by computer operating systems to store all the information about a process. It is also known as a process descriptor.

The role of the PCBs is central in process management: they are accessed and/or modified by most utilities, particularly those involved with scheduling and resource management.

In multitasking operating systems, the PCB stores data needed for correct and efficient process management. [1] Though the details of these structures are system-dependent, common elements fall in three main categories:

Memory tables, for example, contain information about the allocation of main and secondary (virtual) memory for each process, authorization attributes for accessing memory areas shared among different processes, etc. I/O tables may have entries stating the availability of a device or its assignment to a process, the status of I/O operations, the location of memory buffers used for them, etc.

Process identification data include a unique identifier for the process (almost invariably an integer) and, in a multiuser-multitasking system, data such as the identifier of the parent process, user identifier, user group identifier, etc. The process id is particularly relevant since it is often used to cross-reference the tables defined above, e.g. showing which process is using which I/O devices, or memory areas.

Process state data define the status of a process when it is suspended, allowing the OS to restart it later. This always includes the content of general-purpose CPU registers, the CPU process status word, stack and frame pointers, etc. During context switch, the running process is stopped and another process runs. The kernel must stop the execution of the running process, copy out the values in hardware registers to its PCB, and update the hardware registers with the values from the PCB of the new process.

Process control information is used by the OS to manage the process itself. This includes:

PCB must be kept in an area of memory protected from normal process access. In some operating systems the PCB is placed at the beginning of the kernel stack of the process. [2]

A real-time operating system (RTOS) is an operating system (OS) intended to serve real-time applications that process data as it comes in, typically without buffer delays. Processing time requirements are measured in tenths of seconds or shorter increments of time. A real-time system is a time-bound system which has well-defined, fixed time constraints. Processing must be done within the defined constraints or the system will fail. They either are event-driven or time-sharing. Event-driven systems switch between tasks based on their priorities, while time-sharing systems switch the task based on clock interrupts. Most RTOSs use a pre-emptive scheduling algorithm.

In computer systems programming, an interrupt handler, also known as an interrupt service routine or ISR, is a special block of code associated with a specific interrupt condition. Interrupt handlers are initiated by hardware interrupts, software interrupt instructions, or software exceptions, and are used for implementing device drivers or transitions between protected modes of operation, such as system calls.

Micro-Controller Operating Systems is a real-time operating system (RTOS) designed Jean J. Labrosse in 1991. It is a priority-based preemptive real-time kernel for microprocessors, written mostly in the programming language C. It is intended for use in embedded systems.

In computing, preemption is the act of temporarily interrupting a task being carried out by a computer system, without requiring its cooperation, and with the intention of resuming the task at a later time. Such changes of the executed task are known as context switches. They are normally carried out by a privileged task or part of the system known as a preemptive scheduler, which has the power to preempt, or interrupt, and later resume, other tasks in the system. 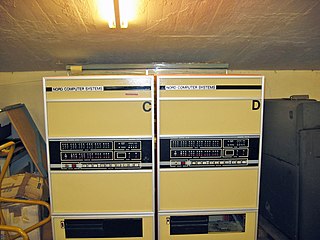 Nord-10 was a medium-sized general-purpose 16-bit minicomputer designed for multilingual time-sharing applications and for real-time multi-program systems, produced by Norsk Data. It was introduced in 1973. The later follow up model, Nord-10/S, introduced in 1975, introduced CPU cache, paging, and other miscellaneous improvements. 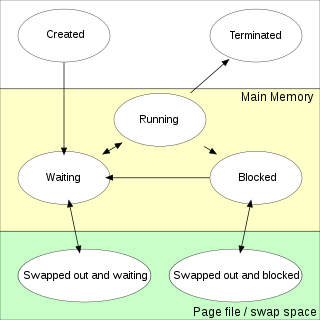 In a multitasking computer system, processes may occupy a variety of states. These distinct states may not be recognized as such by the operating system kernel. However, they are a useful abstraction for the understanding of processes.

Polling, or polled operation, in computer science, refers to actively sampling the status of an external device by a client program as a synchronous activity. Polling is most often used in terms of input/output, and is also referred to as polled I/O or software-driven I/O.

A process is a program in execution. An integral part of any modern-day operating system (OS). The OS must allocate resources to processes, enable processes to share and exchange information, protect the resources of each process from other processes and enable synchronization among processes. To meet these requirements, the OS must maintain a data structure for each process, which describes the state and resource ownership of that process, and which enables the OS to exert control over each process.

DioneOS is a multitasking preemptive, real-time operating system. The system is designed for Texas Instruments MSP430x microcontrollers. Target microcontroller platform has limited resources, i.e. system clock frequency in tens of MHz and memories amount from tens to a few hundreds KB. The system is adapted to such conditions by providing its compact and efficient image. The efficiency term means here minimization of additional CPU load caused by the system usage. According to this definition, the system is more effective when it consumes less CPU time for execution of its internal parts.

Meltdown is a hardware vulnerability affecting Intel x86 microprocessors, IBM POWER processors, and some ARM-based microprocessors. It allows a rogue process to read all memory, even when it is not authorized to do so.