The Protestant Methodists were a small Methodist church based in Leeds. They left the Methodist conference in 1827 in protest at the installation of an organ in Brunswick Chapel in Leeds. This grew into a wider dispute around the style of government of the conference, though it continued to be known as the Leeds Organ Dispute. The Protestant Methodists constituted themselves as a separate body in 1828. In 1836, the group joined the Wesleyan Association, by which time they consisted of several thousand members.

Methodism, also known as the Methodist movement, is a group of historically related denominations of Protestant Christianity which derive their inspiration from the life and teachings of John Wesley. George Whitefield and John's brother Charles Wesley were also significant early leaders in the movement. It originated as a revival movement within the 18th-century Church of England and became a separate denomination after Wesley's death. The movement spread throughout the British Empire, the United States, and beyond because of vigorous missionary work, today claiming approximately 80 million adherents worldwide.

The Methodist Protestant Church (MPC) is a regional Methodist Christian denomination in the United States. It was formed in 1828 by former members of the Methodist Episcopal Church, remaining Wesleyan in doctrine and worship, but adopting congregational governance.

The Holiness movement involves a set of beliefs and practices which emerged within 19th-century Methodism. A number of Evangelical Christian denominations, parachurch organizations, and movements emphasize those beliefs as central doctrine. The movement is Wesleyan-Arminian in theology, and is defined by its emphasis on John Wesley's doctrine of a second work of grace leading to Christian perfection. As of 2015 Holiness-movement churches had an estimated 12 million adherents.

The Wesleyan Church, also known as the Wesleyan Methodist Church and Wesleyan Holiness Church depending on the region, is a holiness Protestant Christian denomination in the United States, Canada, the United Kingdom, South Africa, Namibia, Sierra Leone, Liberia, Indonesia, Asia, and Australia. The church is part of the holiness movement and has roots in the teachings of John Wesley. It is Wesleyan and Arminian in doctrine.

The World Methodist Council (WMC), founded in 1881, is a consultative body and association of churches in the Methodist tradition. It comprises 80 member denominations in 138 countries which together represent about 80 million people. 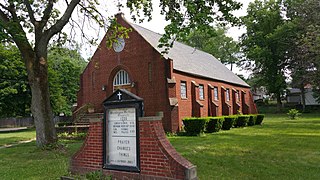 The Wesleyan Methodist Church was a Methodist denomination in the United States organized on May 13, 1841. It was composed of ministers and laypeople who withdrew from the Methodist Episcopal Church because of disagreements regarding slavery, church government, and the doctrine of holiness according to the Discipline of the Wesleyan Methodist Connection (1841), although later editions of the Discipline cite only the first two reasons. The first secessions in 1841 took place in Michigan although the new church group was formalized in Utica, New York. In November 1842, Orange Scott, La Roy Sunderland and J. Horton seceded from the M. E. Church for reasons given in their publication of the True Wesleyan. The following month Luther Lee and Lucius C. Matlack followed. The first general conference was held in Utica, NY, in October 1844.

Pilgrim Holiness Church or ' International Apostolic Holiness Church '[IAHC] is a religious denomination associated with the holiness movement that split from the Methodist Episcopal Church by Martin Wells Knapp in 1897. It was first organized in Cincinnati, Ohio as the International Holiness Union and Prayer League [IHU/IAHC]. Knapp, founder of the IAHC, ordained and his Worldwide Missions Board sent Charles and Lettie Cowman who had attended God's Bible School to Japan in December 1900. By the International Apostolic Holiness Churches Foreign Missionary Board and the co-board of the Revivalist the Cowmans had been appointed the General Superintendents and the Kilbournes the vice-General Superintendent for Korea, Japan and China December 29, 1905. The organization later became the Pilgrim Holiness Church in 1922 which eventually merged with the Wesleyan Methodists in 1968 to form the Wesleyan Church. Among many other Holiness children, the Korea Holiness Church, daughter of the IAHC/PHC, has approximately 10,000 churches globally and two million members in the four holiness denominations in 2010.

The conservative holiness movement is a loosely defined group of conservative Wesleyan-Holiness Christian denominations that trace their origin back to Methodist roots and the teachings of John Wesley. This movement became distinct from other Wesleyan-Holiness bodies in the mid-20th century amid disagreements over modesty in dress, entertainment, and other "old holiness standards" reflective of the Wesleyan-Arminian doctrine of outward holiness. Recent estimates put the size of the movement at less than seven hundred congregations in the U.S.

The Free Methodist Church is a denomination of Methodism, which is a branch of Protestantism. It was founded in 1860 in New York by a group, led by B. T. Roberts, who was defrocked in the Methodist Episcopal Church for criticisms of the spiritual laxness of the church hierarchy. The Free Methodists are so named because they believed it was improper to charge for better seats in pews closer to the pulpit. They also opposed slavery and supported freedom for all slaves in the United States, while many Methodists in the South at that time did not actively oppose slavery. Beyond that, they advocated "freedom" from secret societies, which had allegedly undermined parts of the Methodist Episcopal Church.

The Evangelical Church of North America (ECNA) is a Wesleyan-Holiness, Protestant Christian denomination headquartered in Clackamas, Oregon. As of 2000, the Church had 12,475 members in 133 local churches. The Church sponsors missionaries in seven countries.

Rev. John Farrar (1802–1884) was a Methodist minister. He was Secretary of the annual British Methodist Conference on fourteen occasions, and was twice its elected President. Farrar was tutor and governor of several Wesleyan colleges. These included the early Wesleyan training college at Abney House, near London; and British Methodism's first purpose-built college at Richmond, now Richmond University.

The history of Methodism in the United States dates back to the mid-18th Century with the ministries of early Methodist preachers such as Laurence Coughlan and Robert Strawbridge. Following the American Revolution most of the Anglican clergy who had been in America came back to England. John Wesley, the founder of Methodism, sent Thomas Coke to America where he and Francis Asbury founded the Methodist Episcopal Church, which was to later establish itself as the largest denomination in America during the 19th Century.