Pyry Lampinen (born 7 March 2002) is a Finnish professional footballer who plays for FC Lahti as a midfielder. [1]

Pyry[ˈpɨrɨ](listen) is one of the southernmost neighborhoods of the city of Warsaw. Administratively part of the Ursynów district, it was originally a separate village located along ulica Puławska, which links Warsaw with the town of Piaseczno. To the east, Pyry borders on the Kabaty Woods.

In evolutionary computation, differential evolution (DE) is a method that optimizes a problem by iteratively trying to improve a candidate solution with regard to a given measure of quality. Such methods are commonly known as metaheuristics as they make few or no assumptions about the problem being optimized and can search very large spaces of candidate solutions. However, metaheuristics such as DE do not guarantee an optimal solution is ever found.

WPHS (89.1) is a radio station owned and operated by Warren Consolidated Schools, in Warren, Michigan, United States. WPHS was originally located at 91.5 FM with 10 watts; WPHS now operates at 100 watts at 89.1 FM. The radio station's first broadcast was on March 24, 1964.

VL Pyry was a Finnish low-winged, two-seated fighter trainer aircraft, built by the State Aircraft Factory for use with the Finnish Air Force. The Pyry was in use from 1939 to 1962. The aircraft was a mixed construction of wood, steel, fabric, and duraluminium. 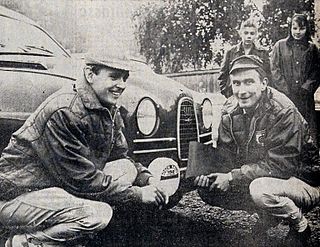 Simo Lampinen is a Finnish former rally driver, and one of the first of the "Flying Finns" who came to dominate the sport.

Aapo was a 1994 Finnish film directed by Tero Jartti and based on a short story by Runar Schildt. The screenplay was written by Jari Hietanen. The film was set in the year 1918. Taisto Reimaluoto portrayed Aapo.

Petteri Lampinen is a Finnish bandy player who plays for Russian side Rodina. Petteri plays in defence and has gained three national champions medals whilst at Edsbyns IF. Petteri plays for the Finnish national bandy team. He made his debut near the start of 21st century while he was still a Tornio PV player. 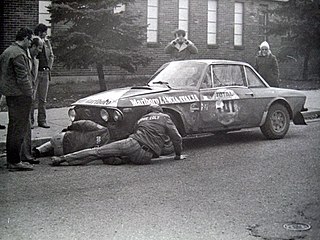 Pyry Kärkkäinen is a Finnish footballer who currently plays for FC Lahti in the Finnish Veikkausliiga.

Lampinen is a Finnish surname. As of 2013, there were almost 10,000 people registered in Finland with this surname. It is a derivation of the Finnish word "lampi", that also occurs as surname in Finland, and it means one who lives by a pond. As a surname it appears both as an old, traditional surname in Eastern Finland and as a new, recently adopted surname in Western Finland. Notable people with the surname include:

HC Keski-Uusimaa known as HCK is a Finnish ice hockey team based in Kerava, Finland. The team was founded in 2008 and began play in the Suomi-sarja, the third level of hockey in Finland, before being promoted to the Mestis for the 2012–13 season.

Pyry Petteri Hannola is a Finnish footballer who plays as a midfielder for Finnish club HJK Helsinki.

Pyry Soiri is a Finnish professional footballer who plays as a midfielder for Danish Superliga side Esbjerg fB and the Finland national team. Born to a Finnish mother and a Namibian father, he spent most of his childhood in Africa. He began his senior career at the age of 17 playing for MYPA. Soiri made his international debut for Finland in November 2017 and has since had over 20 caps. He appeared in 9 out of 10 of Finland´s UEFA Euro 2020 qualification matches and helped Finland national team for the first time secure its place in European Football Championship tournament´s group stage.

Pyry is a male Finnish name with the meaning 'snowstorm', and may refer to:

The 1998–99 Biathlon World Cup was a multi-race tournament over a season of biathlon, organised by the International Biathlon Union. The season started on 11 December 1998 in Hochfilzen, Austria, and ended on 14 March 1999 in Holmenkollen, Norway. It was the twenty-second season of the Biathlon World Cup.