Valter Matošević is a former Croatian team handball player who was at the goalkeeper position. He played for professional teams in Croatia, Germany, Spain, Denmark and Italy. He is currently the head coach of RK Zamet.

Alvaro Načinović is a former Croatian handball player who competed for Yugoslavia and Croatia respectively. 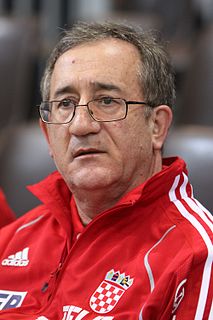 Lino Červar is a Croatian retired handball coach. In 2003 he guided Croatia men's national handball team to gold in the 2003 World Championship as well as to gold at the 2004 Olympics. 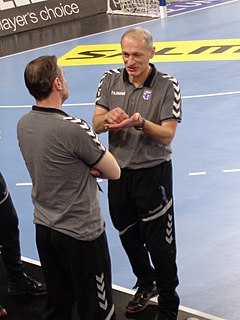 Vladimir Jelčić is a retired Croatian handball player. He is ex-assistant coach of RK Zagreb.

Croatian Academic Rugby Club Mladost is a Croatian rugby union club located in Zagreb, Croatia. They play in the First Croatian Rugby league. Founded in 1954 as Hrvatski Akademski Ragbi Klub Mladost, they are the oldest rugby club in Croatia and have been responsible for introducing rugby to the Region. The club is part of the academic sports club Mladost. The club was founded on January 17, 1954 at the inaugural meeting in the Great Hall of the Technical Faculty in Zagreb. This date is considered the formal beginning of rugby union in Croatia. The club plays at the Mladost Sports Park in Zagreb.

ŽRK Zamet is a women's handball club from Rijeka, Croatia, formed in 1957. The club currently competes in the Croatian First League and the Croatian Handball Cup.

Ante Kostelić is a Croatian former handball player, and handball and skier coach. He is best known for coaching his children, Croatian skiers Janica and Ivica Kostelić, who won the FIS Alpine World Ski Championships, overall FIS Alpine World Cup and Olympic titles between 2001 and 2014. As head coach of the ŽRK Osijek handball club he won the 1981–82 IHF Women's Cup Winners' Cup. He has been honoured with numerous awards including the Croatian Olympic Committee's Matija Ljubek Award (2001), Franjo Bučar State Award for Sport (2003) and the Order of Duke Branimir.

Vinko Kandija was a Croatian handball player and coach. Kandija won over 40 titles and trophies in the game with male and female teams.

RK Ljubljana is a rugby union club from Ljubljana, Slovenia. It participates in the Regional Rugby Championship. The club was founded on 1962.

ŽRK Rudar Labin is a Croatian women's handball club based in Labin. It was established in 1954. It plays in the 2. HRL West. Several notable players from the club went on the play for the national team, both Croatia's and Yugoslavia's.