Rajkumar Thukral is an Indian politician and member of the Bharatiya Janata Party. Thukral is a member of the Uttarakhand Legislative Assembly from the Rudrapur constituency in Udham Singh Nagar district. [1] [2] [3]

Arunachal Congress (AC) was a regional political party in the Indian state of Arunachal Pradesh.

Rudrapur is a city in Udham Singh Nagar district in the Indian state of Uttarakhand. Located at a distance of about 250 km (160 mi) northeast of New Delhi and 250 km (160 mi) south of Dehradun, Rudrapur has a history of over 500 years. It was established in the 16th century by King Rudra Chand, and was the residence of the governor of Tarai region of Kumaon. The city continues to serve as the headquarters of the Udham Singh Nagar district apart from being a major industrial and educational hub today.

Nikita Thukral is an Indian film actress and model, who has acted in Kannada, Telugu, Malayalam and Tamil cinemas.She has won ITFA Best Supporting Actress Award in 2008.

The Jharkhand Vikas Morcha (Prajatantrik) was a state political party in the Indian state of Jharkhand which was founded by former Union Minister and First Chief Minister of Jharkhand, Babulal Marandi.

The 2012 Gujarat Legislative Assembly elections were held in the Indian state of Gujarat in December 2012 for all 182 members of the Gujarat Legislative Assembly. Incumbent Chief Minister Narendra Modi of Bharatiya Janta Party (BJP), in power since 2002, was running for his fourth term. The leader of the opposition was Shaktisinh Gohil of the Indian National Congress (INC).

Maharaja is a 2005 Kannada family-drama film directed by Om Sai Prakash featuring Sudeep and Nikita Thukral in the lead roles. The film features background score and soundtrack composed by S. A. Rajkumar and lyrics by K. Kalyan and V. Nagendra Prasad. The film released on 14 January 2005.

Kushi Kushiga is a 2004 Indian Telugu-language film produced by Adityaram on Adityaram Movies banner and directed by G. Ram Prasad. Starring Jagapati Babu, Ramya Krishna, Sangeetha, Nikita Thukral, Venu Thottempudi and music composed by S. A. Rajkumar. The film is a remake of the Malayalam film Chronic Bachelor which was remade in Tamil earlier as Engal Anna the same year. The film recorded as Above Average at box-office. 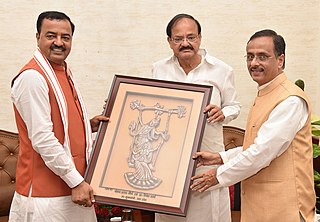 Keshav Prasad Maurya is the deputy Chief Minister of Uttar Pradesh. He is a member of the Bharatiya Janata Party and contested the 2014 Indian general elections from the Phulpur parliamentary constituency of Allahabad district and won it.

Thukral is a Punjabi surname native to the Punjab region in South Asia. 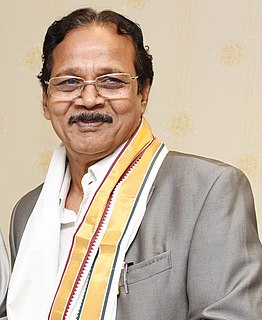 Rajkumar Badole is an Indian politician. He is a Bharatiya Janata Party member and had represented Arjuni Morgaon in 13th Maharashtra Legislative Assembly in Devendra Fadnavis ministry.

Akhilesh Pratap Singh is an Indian politician and a member of the 16th Legislative Assembly of Uttar Pradesh. He represented the Rudrapur constituency of Uttar Pradesh until 2017 and is a member and spokesperson for the Indian National Congress party.

Rajesh Shukla is an Indian politician and member of the Bharatiya Janata Party. Shukla is a two-times member of the Uttarakhand Legislative Assembly from the Kichha constituency in Udham Singh Nagar district. In the latest elections of 2017, he defeated the sitting Chief Minister Of Uttarakhand Harish Rawat.

Jai Prakash Nishad is an Indian politician and a member of Legislative Assembly of Deoria, Uttar Pradesh of India. he represents the Rudrapur constituency of Uttar Pradesh and is a member of the Bhartiya Janata Party.

Rajkumar Imo Singh, also known as R.K.Imo Singh is an Indian politician from the State of Manipur and a former member of the Indian National Congress. He was elected as a member of the Manipur Legislative Assembly from Sagolband constituency in Imphal West District from the Indian National Congress in 2012 & 2017 Manipur Legislative Assembly election. He is now an Independent/Unattached Member. He is the eldest son of Rajkumar Jaichandra Singh, the first Union Minister from Manipur in the erstwhile ministry of Rajiv Gandhi. He was subsequently deputed as the Chief Minister of the State. His grandfather R.K.Birchandra Singh was the first Congress President of the State of Manipur when Manipur attained statehood. R.K.Imo Singh is also the President of Manipur Cricket Association, affiliated to BCCI.