Revision Control System(RCS) is an early version control system (VCS). It is a set of UNIX commands that allow multiple users to develop and maintain program code or documents. With RCS, users can make their own revisions of a document, commit changes, and merge them. RCS was originally developed for programs but is also useful for text documents or configuration files that are frequently revised. [2]

RCS was first released in 1982 [2] by Walter F. Tichy at Purdue University. It was an alternative tool to the then-popular Source Code Control System (SCCS) which was nearly the first version control software tool (developed in 1972 by early Unix developers). [3] RCS is currently maintained by the GNU Project. [4]

An innovation in RCS is the adoption of reverse deltas. Instead of storing every revision in a file like SCCS does with interleaved deltas, RCS stores a set of edit instrutions to go back to an earlier version of the file. Tichy claims that it is faster for most cases because the recent revisions are used more often. [2]

Initially (through version 3, which was distributed in 4.3BSD), its license prohibited redistribution without written permission from Walter Tichy: [5]

Copyright (C) 1982 by Walter F. Tichy [...] All rights reserved. No part of this software may be sold or distributed in any form or by any means without the prior written permission of the author.

A READ_ME file accompanied some versions of RCS which further restricted distribution, e.g., in 4.3BSD-Reno. [6]

Ca. 1989, the RCS license was altered to something similar to the contemporary BSD licenses, as seen by comments in the source code. [7]

Redistribution and use in source and binary forms are permitted provided that the above copyright notice and this paragraph are duplicated in all such forms and that any documentation, advertising materials, and other materials related to such distribution and use acknowledge that the software was developed by Walter Tichy.

RCS operates only on single files. It has no way of working with an entire project, so it does not support atomic commits affecting multiple files. Although it provides branching for individual files, the version syntax is cumbersome. Instead of using branches, many teams just use the built-in locking mechanism and work on a single head branch. [2]

RCS revolves around the usage of "revision groups" or sets of files that have been checked-in via the "co" (checkout) and "ci" (check-in) commands. By default, a checked-in file is removed and replaced with a ",v" file (so foo.rb when checked in becomes foo.rb,v) which can then be checked out by anyone with access to the revision group. RCS files (again, files with the extension ",v") reflect the main file with addition metadata on its first lines. Once checked in, RCS stores revisions in a tree structure that can be followed so that a user can revert a file to a previous form if necessary. [2]

RCS is still used in some projects, but its continued usage is nowhere near that of more modern tools like Git. [3]

SCCS (released in 1972) and DSEE (considered a predecessor of Atria ClearCase) are two other relatively well-known ground-breaking VCS software tools. These tools are generally considered the first generation of VCS as automated software tools back in times.

After the first generation VCS, tools like CVS and Subversion, which feature a locally centralized repository, could be considered as the second generation VCS. Specifically CVS (Concurrent Versions System) was developed on top of RCS structure, improving scalability of the tool for larger groups, and later branched out PRCS as a simpler CVS-like tool.

Nowadays, Subversion may be considered[ by whom? ] as the most popular and widely in use VCS tool from this generation which has filled important weaknesses of CVS. Later SVK developed with the goal of remote contribution feature, but still the foundation of its design were pretty similar to its predecessors. [3]

As Internet opened its path through the world, third generation of these tools emerged providing a decentralized version control system, allowing users to keep their revisions in multiple machines, while contributing to the same project. In this generation there are Git, Arch tools (Bazaar, ArX), BitKeeper, Mercurial, and Monotone and many others as the third generation of VCS software tools. [3]

The Concurrent Versions System (CVS), also known as the Concurrent Versioning System, is a free client-server revision control system in the field of software development. A version control system keeps track of all work and all changes in a set of files, and allows several developers to collaborate. Dick Grune developed CVS as a series of shell scripts in July 1986.

Apache Subversion is a software versioning and revision control system distributed as open source under the Apache License. Software developers use Subversion to maintain current and historical versions of files such as source code, web pages, and documentation. Its goal is to be a mostly compatible successor to the widely used Concurrent Versions System (CVS).

The history of software configuration management (SCM) in computing can be traced back as early as the 1950s, when CM, originally for hardware development and production control, was being applied to software development. The first software configuration management was most likely done manually. Eventually, software tools were written to manage software changes. History records tend to be based on tools and companies, and lend concepts to a secondary plane.

The computer tool patch is a Unix program that updates text files according to instructions contained in a separate file, called a patch file. The patch file is a text file that consists of a list of differences and is produced by running the related diff program with the original and updated file as arguments. Updating files with patch is often referred to as applying the patch or simply patching the files.

Source Code Control System (SCCS) is a version control system designed to track changes in source code and other text files during the development of a piece of software. This allows the user to retrieve any of the previous versions of the original source code and the changes which are stored. It was originally developed at Bell Labs beginning in late 1972 by Marc Rochkind for an IBM System/370 computer running OS/360. 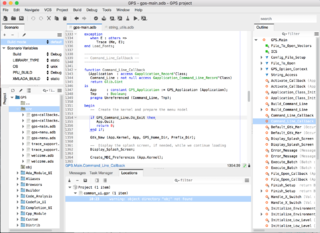 A versioning file system is any computer file system which allows a computer file to exist in several versions at the same time. Thus it is a form of revision control. Most common versioning file systems keep a number of old copies of the file. Some limit the number of changes per minute or per hour to avoid storing large numbers of trivial changes. Others instead take periodic snapshots whose contents can be accessed with similar semantics to normal file access. 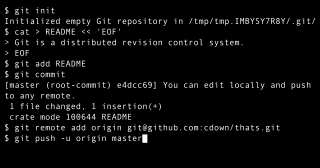 Git is a distributed version-control system for tracking changes in source code during software development. It is designed for coordinating work among programmers, but it can be used to track changes in any set of files. Its goals include speed, data integrity, and support for distributed, non-linear workflows.

In software development, distributed version control is a form of version control in which the complete codebase, including its full history, is mirrored on every developer's computer. This enables automatic management branching and merging, speeds up of most operations, improves the ability to work offline, and does not rely on a single location for backups.

Sun WorkShop TeamWare is a distributed source code revision control system made by Sun Microsystems. It was first announced in November 1992 as SPARCworks/TeamWare and ProWorks/TeamWare and made commercially available in 1993. Last available as part of the Forte Developer 6 update 2 product, TeamWare is no longer being offered for sale, and is not part of the Sun Studio product.

Mercurial is a distributed revision-control tool for software developers. It is supported on Microsoft Windows and Unix-like systems, such as FreeBSD, macOS and Linux.

TortoiseSVN is a Subversion client, implemented as a Microsoft Windows shell extension, that helps programmers manage different versions of the source code for their programs. It is free software released under the GNU General Public License.

GNU Bazaar is a distributed and client–server revision control system sponsored by Canonical.

TortoiseGit is a Git revision control client, implemented as a Windows shell extension and based on TortoiseSVN. It is free software released under the GNU General Public License.

Meld is the visual diff and merge tool of GNOME, targeted at developers. It allows users to compare two or three files or directories visually, color-coding the different lines.