After leaving Bannockburn High School in 1977, aged 15, he moved to York to work as a stable lad. This career led to Quinn moving to work for Paul Cole in Lambourn for 17 years (1981-1998). After some years as a freelance jockey, he joined Henry Cecil in Newmarket (2000-2004). Quinn has raced with owners Prince Fahd bin Salman (1990-1991) and John L. Dunlop. Among other victories, Quinn has achieved 26 victories at Goodwood Racecourse. He briefly retired in 2006, only to return to racing early the next year.

Steve Cauthen is an American jockey who is now retired. 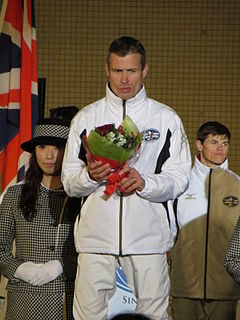 Thomas Weston, born Dewsbury, West Riding of Yorkshire, was a British horse racing jockey. One of the most successful jockeys of the inter-war years he won eleven English Classics, eight as stable jockey for the Earl of Derby including two Derby Stakes winners in Sansovino and Hyperion.He was British flat racing Champion Jockey in 1926.

Assessor was an Irish-bred, British-trained Thoroughbred racehorse and sire best known for his performances over extended distances. After winning two minor races as a juvenile developed into a high-class stayer in 1992, recording wins in the Lingfield Derby Trial and Prix Royal-Oak. He reached his peak as a four-year-old in 1993 when he won the Yorkshire Cup, Doncaster Cup and Prix du Cadran. He suffered from training problems thereafter but recorded another big win when he took the St Leger Italiano in 1995. After his retirement from racing he became a successful sire of National Hunt horses.