Robelela is a village in Central District of Botswana. It is located south-east of Francistown, close to the border with Zimbabwe. The population was 471 in 2001 census. [1]

Central is the largest of Botswana's districts in terms of area and population. It encompasses the traditional homeland of the Bamangwato people. Some of the most politically connected Batswana have come from the Central District, including former President Sir Seretse Khama, former President Festus Mogae, and current President Lt. General Seretse Ian Khama. The district borders the Botswanan districts of Chobe in the north, North-West in the northwest, Ghanzi in the west, Kweneng in southwest, Kgatleng in the south and North-East in the northeast, as well as Zimbabwe also in the northeast and South Africa in the southeast.

Botswana, officially the Republic of Botswana, is a landlocked country in Southern Africa. Formerly the British protectorate of Bechuanaland, Botswana adopted its new name after becoming independent within the Commonwealth on 30 September 1966. Since then, it has been a representative republic, with a consistent record of uninterrupted democratic elections and the best perceived corruption ranking in Africa since at least 1998. It is currently Africa's oldest continuous democracy. 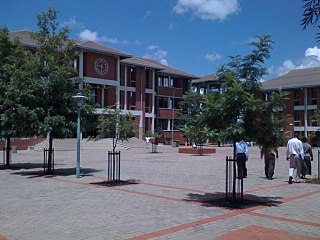 Francistown is the second largest city in Botswana, with a population of about 100,079 and 150,800 inhabitants for its agglomeration at the 2011 census. and often described as the "Capital of the North." It is located in eastern Botswana, about 400 kilometres (250 mi) north-northeast from the capital, Gaborone. Francistown is located at the confluence of the Tati and Inchwe rivers, and near the Shashe River and 90 kilometres from the international border with Zimbabwe. Francistown was the centre of southern Africa's first gold rush and is still surrounded by old and abandoned mines. The City of Francistown is an administrative district, separated from North-East District. It is administered by Francistown City Council.

Robelela in the Bobirwa Sub-District, is the village closest to the Dikgatlhong Dam, completed in 2012. This will be the biggest dam in Botswana with a carrying capacity of 400 million cubic meters. A pipeline to Selebi-Phikwe is planned to carry the water to the North-South Carrier Pipeline, which will take the water south from Selebi-Phikwe to Gaborone. [2]

Selebi-Phikwe is a mining town located in the Central District of Botswana. It had a population of 49,724 in 2011 which is now estimated to have risen to c.52,000. The town is an administrative district, separate from the surrounding Central District. 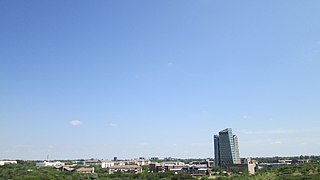 The influx of construction workers for the three major components of the project, which includes a new tarred road, and the relocation of affected settlements has started to increase the population of Robelela, and there is concern that these previously isolated communities are a high risk for HIV/AIDS and STD infections. Recognizing the risk of mobile communities for HIV and STD transmission, the Department of Water Affairs has contracted Tebelopele (the largest NGO in Botswana, responsible for HIV/AIDS Counseling and Testing) to implement a program of intervention, education and testing in the region. Tebelopele has appointed Golekanye Monare as Project manager for the Dikgatong Dam.

Hinduism is a minority religion practised by 0.3 % of the population of Botswana.The practice of Hinduism in Botswana is concentrated in and around Gaborone and Selebi-Phikwe. The community of Hindus began to form in the early 20th century with the beginning of immigration from India to Botswana. Most Hindus in Botswana are of Indian descent.

Botswana is experiencing one of the most severe HIV/AIDS epidemics in the world. The national HIV prevalence rate among adults ages 15 to 49 is 24.8 percent, which is the third highest in the world, behind Lesotho and Swaziland. HIV/AIDS threatens the many developmental gains Botswana has achieved since its independence in 1966, including economic growth, political stability, a rise in life expectancy, and the establishment of functioning public educational and health care systems.

Sefophe is a village in Central District of Botswana. It is located 27 km south-east of the mining town of Selebi-Phikwe, within 100 km distance of borders with Zimbabwe and South Africa. The population was 3,821 in 2001 census.

Mogapi is a village in Central District of Botswana. The village is located 47 km south of Selebi-Phikwe and is less than 100 km from the border with South Africa. The population was 1,814 in 2001 census.

The mineral industry of Botswana has dominated the national economy since the 1970s. Diamond has been the leading component of the mineral sector since large-scale diamond production began in 1972. Most of Botswana's diamond production is of gem quality, resulting in the country's position as the world's leading producer of diamond by value. Copper, gold, nickel, and soda ash production also has held significant, though smaller, roles in the economy. In 2005, mining accounted for about 38% of Botswana's real gross domestic product (GDP), and more than 50% of government revenues were derived from mining and mineral-processing activity. In 2005, the nominal value of minerals produced in Botswana exceeded that of 2004 by about 20% in U.S. dollars. Much of the increase was attributed to higher international mineral prices. Diamond, copper-nickel matte, and gold, in order of value, accounted for most of the increase.

Tobane is a small village in the eastern part of Botswana about 20 km from the copper/nickel mining town of Selebi-Phikwe. The village has access to the town through a tarred road. The Motloutse River passes the village on the northeastern side. The village has a lot of facilities such as clean water from the Shashe dam, electricity, mobile phone connection through Orange,Bemobile and Mascom wireless. It also has landline service through Botswana Telecommunications Cooperation. There is a clinic, a primary school, and a Junior school(Motlhasedi I community junior secondary school) in the area. The population of the village is roughly 9190 The Regent chief is Nametshego Nengu

The Water Utilities Corporation (WUC) is a government-owned corporation that provides water and waste water management services in Botswana. The Board is appointed by the Minister of Minerals, Energy and Water Resources. The water supply is critically important in the arid or semi-arid environment of Botswana. 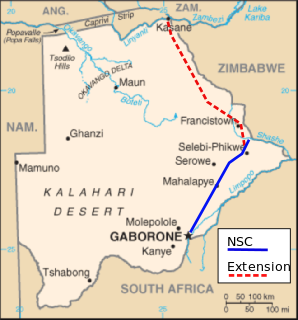