Rochelle Woods (born 1999), also known as Rochy Woods, is an English player of English billiards. She was runner-up in the 2015 World Women's Billiards Championship.

Woods took her GCSEs at Litcham School [1] before going to study for a BTEC award in sports coaching. [2] She has a twin sister called Tiffany [1] and prefers to be known as Rochy rather than Rochelle. [2]

Woods started playing billiards at the age of ten, having been introduced to the sport by her coach Phillip Welham at a taster day. [3] [1] She entered the English Under 16 Billiards Championship in 2013 and lost to the eventual champion James Eyre by 10 points. [4] She prefers to be known as Rochy rather than Rochelle. [2]

Woods won the 2016 English Girls' Billiards title by beating Green in the final again. She was also a semi-finalist in the open Junior championship, losing 108–113 to Nathan Boughren. [7] At the 2016 World Women's Billiards Championship, Woods lost all four of her matches, to Bonney, Revanna Umadevi, Gaye Jones and Eva Palmius. [8]

The following year, aged 18 in 2017, Woods gained her fourth national title after defeating Brittany Chambers 152-48 in the final, and was also a semi-finalist in the (open) National Junior Billiards championship. [9] At the 2017 Women's World Championship, she failed to qualify despite recording a 178–166 win over eventual champion Emma Bonney. [10] [11]

Reanne Evans is an English snooker player and the reigning World Women's Snooker Champion. She has won the women's world title a record 12 times, with 10 consecutive titles between 2005 and 2014 and further wins in 2016 and 2019. She is ranked number one on the World Women's Snooker Tour.

The International Billiards & Snooker Federation (IBSF) is an organisation that governs non-professional snooker and English billiards around the world. As of January 2020, the organisation is headquartered in Dubai, United Arab Emirates.

Emma Bonney is an English world champion player of English billiards, and snooker player. She has won the women's world billiards title a record thirteen times. 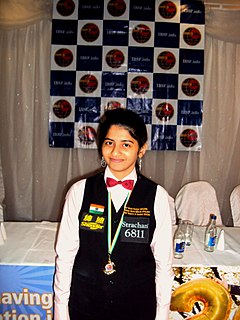 Arantxa Sanchis is a female professional English billiards and snooker player from India. She won a gold medal in the Women's Team event at the inaugural IBSF World 6-Red Snooker and Team Snooker Championship in Carlow, Ireland, on 6 October 2013. It was a historic first gold medal for Indian women's snooker at a World Championship. On 27 September 2015, she won the inaugural IBSF World Billiards Championship in Adelaide, Australia. This feat made her the only woman in the world to hold IBSF World titles in both billiards and snooker.

Robby Foldvari is an Australian player of snooker, English billiards and pool. He is a multi-year World Billiards Champion, and a national-level champion in both snooker and nine-ball pool (2012), as well as a World Games competitor (2013). Outside of competition, he is a coach and television commentator. Foldvari won the Australian Open 8 Ball Pool Championship (2015) completing the Royal Flush of National titles in every cuesports discipline. In June 2016 he won the Australian Open 10 ball Pool Championship

The year of 2019 included professional tournaments surrounding table-top cue sports. These events include snooker, pool disciplines and billiards. Whilst these are traditionally singles sports, some matches and tournaments are held as doubles, or team events. The snooker season runs between May and April, whilst the pool and billiards seasons run in the calendar year.

Rebecca Kenna is an amateur snooker and billiards player from Keighley.

Suzie Opacic is an English snooker player. She won the 2006 World Ladies Junior Championship and is an active player on the women's professional snooker circuit, who has reached the semi-finals of several ranking tournaments.

Amee Kamani is an Indian snooker player. She was runner-up in the 2016 IBSF World Snooker Championship, and was the 2018 Asian Billiards Sports Championships (ACBS) Ladies Champion.

The Billiards and Snooker Control Council (B&SCC) was the governing body of the games of English billiards and snooker and organised professional and amateur championships in both sports. It was formed in 1919 by the union of the Billiards Association and the Billiards Control Club.

The World Women's Billiards Championship is an English billiards tournament, first held in 1931 when organised by the cue sports company Burroughes and Watts then run from 1932 by the Women's Billiards Association (WBA). It is currently run under the auspices of World Billiards Ltd (WBL), a subsidiary company of the World Professional Billiards and Snooker Association.

Anna Lynch is an English billiards and snooker player from Australia who won the World Women's Billiards Championship in 2019. She is also a professional jazz pianist.

Chris Shutt is an English champion player of English billiards. He won the World Professional Billiards Championship in 2005. 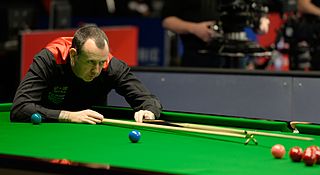 In 2018, championships were held across three continents to determine the best players in major cue sports, including snooker, pool, and English billiards. Whilst these are traditionally single player sports, some matches and tournaments are held as either doubles or as team events. The snooker season runs between May and April, whilst the pool and billiards seasons run through the calendar year.