The Romania women's national rugby union team first played in 2007. Their widely recognized nickname is "The Acorns", as an offshoot of the men's team which are called "The Oaks".

The Romanian Rugby Federation, abbreviated as FRR, is the governing body for the sport of rugby union in Romania. Romania currently comprises 24,610 players, 9,810 members of which are registered and 113 clubs in the whole country.

Rugby union is a moderately popular team sport played in Romania with a tradition of more than 100 years. The Romanian men's national team are currently 18th in the World Rugby Rankings as of 14 June 2021. 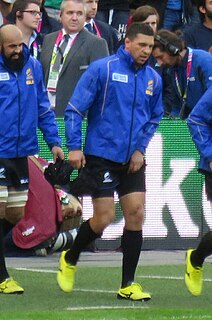 Ovidiu Toniţa is a Romanian former rugby union player who played 73 times for the Romania national team between 2000 and 2016. A former lock and presently a flanker and number 8. He played the majority of his career for USA Perpignan. He is noted for his size, which is considered unusual for his position on the field. His supporters are known to have compared him to the Australian footballer John Eales, and he is often seen as Romania's key player. 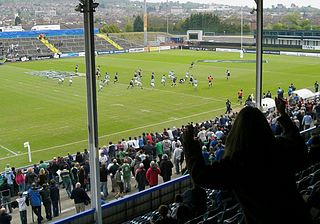 The Romania national rugby sevens team has competed in the World Rugby Sevens Series and in the Rugby World Cup Sevens, but not yet in the Summer Olympic Games. They are currently competing in the Rugby Europe Sevens Trophy Series.

Rugby Club Județean Farul Constanța was a semi-professional Romanian rugby union club from Constanța, which played continuously from 1970 until 2014 in the CEC Bank SuperLiga, the first division of Romanian rugby. The team withdrew from the Romanian top tier competition before the 2015 edition and ultimately disbanded. 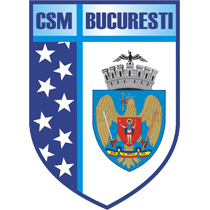 CSM Bucuresti was a Romanian rugby union team based in București, that played in the CEC Bank SuperLiga.

CSM Suceava, full name Clubul Sportiv Municipal Suceava, was a sports club from Suceava, Romania. It is notable for its football team which played one season in the Divizia A, the highest Romanian league at that time.

Emilian Necula, known also as Emil Necula is a Romanian former rugby union player. He played as Number 8. He is nicknamed Ene.

Alexandru Petru Bucur is a Romanian rugby union footballer. He plays as a centre or full-back for professional SuperLiga club CSM Baia Mare.

Paul Popoaia is a Romanian rugby union player. He plays as a wing or full-back for professional SuperLiga club CSM Baia Mare.

Vasile Balan is a Romanian rugby union player. He plays as a prop for professional SuperLiga club Steaua București.