Ron Randall (born November 22, 1956) [1] is an American comic book artist best known as the creator of the character Trekker.

A graduate of The Kubert School [2] Ron Randall's first published comic book work was a two-page backup story titled "Killers Above -- Killers Below!" which was written by Robert Kanigher and appeared in Unknown Soldier #243 (September 1980). [3] Randall then drew several stories for the Sgt. Rock title with Joe Kubert, [4] as well as for many of DC's mystery titles. He and writer Gary Cohn co-created the "Barren Earth" feature as a backup in The Warlord #63 (November 1982) and it was spun off into a four-issue limited series in 1985. [3] Randall became the artist on the Arak, Son of Thunder series with issue #26 (October 1983). [3] He collaborated with writer Greg Potter on the "Me & Joe Priest" graphic novel [5] and drew a few issues of Alan Moore's Swamp Thing run. [3] Randall introduced his creation Trekker, a 23rd-century female bounty hunter named Mercy St. Clair, in Dark Horse Presents #4 (January 1987). [6] The character is not named for fans of the Star Trek franchise. [7]

Randall illustrated the Endless Quest book Conan the Outlaw (1984) and the Dungeons & Dragons adventures To Find a King (1985) and The Bane of Llywelyn (1985).

In 1992, he and writer Gerard Jones became the creative team on the Justice League Europe title. [8]

He is a member of Periscope Studio in Portland, Oregon. [9] In September 2011, Randall launched Trekkkercomic.com, a website collecting all of the previously published Trekker material. Upon completion of the posting of older material, Randall began to present new Trekker stories on the site. [7] Trekker appeared in print again beginning with the story "The Train to Avalon Bay Part 1" in Dark Horse Presents vol. 2 #24 published in May 2013. [3] [10] The Trekker Omnibus collecting the character's appearances was published by Dark Horse in August 2013. [11] [12]

In 2012, Randall was commissioned by H&R Block to illustrate the tax liabilities of Batman and Spider-Man. [13] 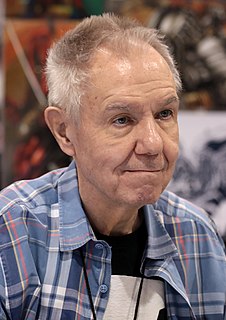 Gerard Francis Conway is an American comic book writer, comic book editor, screenwriter, television writer, and television producer. He is known for co-creating the Marvel Comics vigilante antihero the Punisher and scripting the death of the character Gwen Stacy during his long run on The Amazing Spider-Man. At DC Comics, he is known for co-creating the superhero Firestorm The creation of the character Jason Todd early in his run and others, and for writing the Justice League of America for eight years. Conway wrote the first major, modern-day intercompany crossover, Superman vs. the Amazing Spider-Man.

Terry Kevin Austin is an American comics artist, working primarily as an inker. He is best known for his work embellishing John Byrne's pencils on Uncanny X-Men from 1977 to 1981.

Klaus Janson is a German-born American comics artist, working regularly for Marvel Comics and DC Comics and sporadically for independent companies. While he is best known as an inker, Janson has frequently worked as a penciller and colorist.

Andrew Kubert is an American comics artist, letterer and writer, son of Joe Kubert, and brother of Adam Kubert, both of whom are also artists, and the uncle of comics editor Katie Kubert. He is a graduate of and an instructor of second-year classes at The Kubert School, founded by his father who also taught there.

Ryan Sook is an American comic book artist, known for his work on books such as Seven Soldiers: Zatanna, X-Factor and The Spectre. His style has been compared to that of Mike Mignola, Adam Hughes, and Kevin Nowlan.

Steve Rude is an American comics artist. He is best known as the co-creator of Nexus.

Douglas Mahnke is an American comic book artist and penciller.

Lee Weeks is an American comics artist known for his work on such titles as Daredevil. 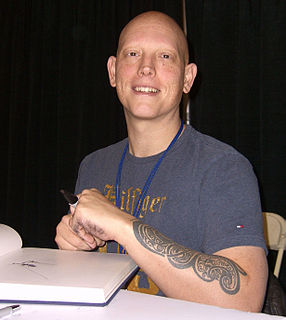 David Finch is a Canadian-born comics artist known for his work on Top Cow Productions' Cyberforce, as well as numerous subsequent titles for Marvel Comics and DC Comics, such as The New Avengers, Moon Knight, Ultimatum, and Brightest Day. He has provided album cover art for the band Disturbed, and done concept art for films such as Watchmen.

In comic books, an intercompany crossover is a comic or series of comics where characters that at the time of publication are the property of one company meet those owned by another company. These usually occur in "one-shot" issues or miniseries.

Jan Duursema is an American comics artist known for her work on the Star Wars comics franchise. She is the creator of Denin and Vila from Naldar, the Twi'lek Jedi Aayla Secura and the Kiffar Jedi Quinlan Vos.

Shane Davis is an American comic book artist best known for his work on Superman and Batman for DC Comics.

Ron J. Wagner is an American comics artist who has drawn for titles such as G.I. Joe: A Real American Hero, The Punisher, Nth Man: The Ultimate Ninja, and Batman: Legends of the Dark Knight. He is also an animation storyboard artist, games designer, and portrait artist. He attended the Joe Kubert School of Cartoon and Graphic Art, in a class which also included Lee Weeks, Andy Kubert, and Adam Kubert. Wagner's earliest work in professional comics, while in his third and final year at the Kubert School, was drawing backgrounds for Stan Woch in World's Finest Comics.