The Grand Comics Database (GCD) is an Internet-based project to build a database of comic book information through user contributions. [1] [2] The GCD project is cataloging information on creator credits, story details, reprints, and other information useful to the comic book reader, comic collector, fan, and scholar. [3] [4] [5] The GCD is a 501(c)(3) nonprofit organization incorporated in Arkansas.

One of the earliest published catalogs of comic books appeared in the 1960s, when Dr. Jerry Bails and Howard Keltner put together some projects to catalog the comic books of the "Golden Age." These efforts were Dr. Bails' The Collector's Guide to the First Heroic Age of Comics, and Howard Keltner's Index to Golden Age Comic Books, and their collaboration on The Authoritative Index to DC Comics. The next big step in organizing data about comic books was Robert Overstreet's Overstreet Comic Book Price Guide , which is still being published. This guide is sometimes referred to as the first best attempt to list factual information beyond the superhero comics. It was likely the first catalog to get widespread distribution. Today there are several other comic book price guides.

In 1978, the GCD's immediate predecessor, APA-I (Amateur Press Alliance for Indexing) was formed by a few fans who were interested in exchanging information on comic books in index form. These people were generally interested in either one of two things — either following the plot threads and continuity of the stories, or the creator credits. APA-I is also still running, as a paper-based index. The organization publishes a quarterly magazine. APA-I members have gathered editorial records and conducted interviews with comic book professionals, to add to the information that could be gleaned from the books themselves.

In late 1993 and early 1994, three members of APA-I interested in comic books started up an e-mail correspondence. Tim Stroup, Bob Klein, and Jonathan E. Ingersoll soon began sharing indexing information in a common format using electronic media for storage and distribution. By March 1994, they had formed a new group to create an electronic version of APA-I related to comic books, giving it the name Grand Comic-Book Database and the goal to 'contain information on every comic book ever published'.

The newly formed GCD grew slowly, using the new medium of e-mail to canvass friends and acquaintances from APA-I as well as other contacts in comics fandom. Early work consisted of indexing information, setting goals, and deciding on file structure. Information was distributed on floppy discs and via surface mail. The use of e-mail to knit together the group through constant communication has proved important to this day. There had been several previous attempts to set up similar groups that did not have this advantage. The original file structure has changed, and data distribution and collection methods are now almost exclusively over the Internet. It is one of several online databases of comic book information.

The Grand Comics Database is a volunteer organization of hobbyists. It is not a commercial endeavor, and its charter [6] states that it will not become one. The database currently catalogs more types of information than originally intended, and the formats of presentation and data gathering have changed also. All data is available for research and use by the public at no charge.

The project is overseen by a board elected by the members. Decisions on changes are to be made by the board as directed by member consensus. The project operates with several public contacts. [7]

The bulk of the work is performed by an ever-changing group of editors and contributors through the online indexing system on the web site, or through offline submissions. Casual users of the website also make contributions through an error reporting system. And, because several comic book creators are members, these creators often provide details on their own work or colleagues' work.

Several e-mail lists are maintained for communication of a variety of comic book-related information. The database does not include any information on comic book pricing, nor does it conduct any sales or trade services.

The Grand Comics Database intends to catalog key story information, [8] creator information, and other information which is useful to readers, fans, hobbyists, and researchers. This includes creator information such as writers, pencillers, inkers, colorists, letterers, and editors. It also includes story information such as: title, feature of the story, genre of the story, page count, characters, and a short synopsis. Stories are defined to include any feature in a comic book, which allows the database to include advertising, text articles in an issue, letter columns, character profiles, and any other features that are in a comic book. Also included is information on the comic books themselves, such as: publisher, publication date, price, page count, a cover image, and reprint information.

The GCD project uses a broad definition of comic book; [9] a comic book is 50% or more art and/or pictures which tell a story. The editors try to err on the side of inclusion, so that if there is a question, a book usually can be included. This definition eliminates any webcomics. However, it includes small print run fanzines, promotional giveaway comics, and minicomics. Although syndicated comic strips are not indexed, listings include mentions of comic books reprinting newspaper strips.

Since 2004, comic book fans can index their favorite comic book using the convenience of a web-based interface. Anyone interested is encouraged to contribute, by using the interface, uploading a cover image scan, or even simply sending an e-mail with new information. The standards request that all indexing be done from an actual copy of the comic book, to ensure that data is verified upon entry. A group of editors then vets each entry before the information is added to the database.

The database currently has comic books from many countries representing over forty languages, [10] though United States issues represent the bulk of the data. There are active chapters and indexers in several other countries, including Germany, Netherlands, Norway, and Sweden.

As of January 2021 [update] , the database includes information on over:

A graphic novel is a book made up of comics content. Although the word "novel" normally refers to long fictional works, the term "graphic novel" is applied broadly and includes fiction, non-fiction, and anthologized work. It is, at least in the United States, distinguished from the term "comic book", which is generally used for comics periodicals.

Joseph Leonard Sinnott was an American comic book artist. Working primarily as an inker, Sinnott is best known for his long stint on Marvel Comics' Fantastic Four, from 1965 to 1981, initially over the pencils of Jack Kirby. During his 60 years as a Marvel freelance artist and then salaried artist working from home, Sinnott inked virtually every major title, with notable runs on The Avengers, The Defenders, and Thor.

Reed Leonard Crandall was an American illustrator and penciller of comic books and magazines. He was best known for the 1940s Quality Comics' Blackhawk and for stories in EC Comics during the 1950s. Crandall was inducted into the Will Eisner Comic Book Hall of Fame in 2009. 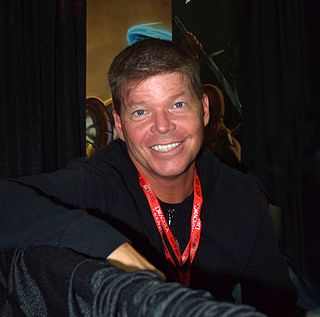 Robert Liefeld is an American comic book creator. A prominent writer and artist in the 1990s, he is known for co-creating the character Cable with writer Louise Simonson and the character Deadpool with writer Fabian Nicieza. In the early 1990s, Liefeld gained popularity due to his work on Marvel Comics' The New Mutants and later X-Force. In 1992, he and several other popular Marvel illustrators left the company to found Image Comics, which started a wave of comic books owned by their creators rather than by publishers. The first book published by Image Comics was Liefeld's Youngblood #1. 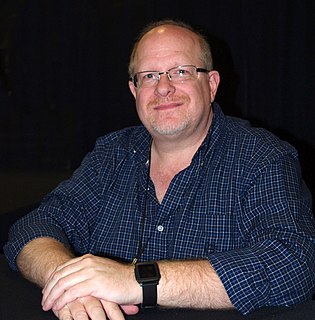 Mark Waid is an American comic book writer, known for his work on titles for DC Comics such as The Flash, Kingdom Come and Superman: Birthright, and for his work on Captain America, Fantastic Four, and Daredevil for Marvel Comics. From August 2007 to December 2010, Waid served as Editor-in-Chief, and later, Chief Creative Officer of Boom! Studios, where he wrote titles such as Irredeemable, Incorruptible, and The Traveler.

Youngblood is a superhero team that starred in their self-titled comic book, created by writer/artist Rob Liefeld. The team made its debut as a backup feature in the 1987 RAMM #1 before the next month appearing in the one-shot Megaton Explosion #1 before later appearing in 1992 in its own ongoing series as the flagship publication for Image Comics. Youngblood was originally published by Image Comics, and later by Awesome Entertainment. Upon Rob Liefeld's return to Image Comics, it was revived in 2008, 2012, and 2017. In 2019, Liefeld revealed that he has not owned the rights to Youngblood for several years.

Godzilla has appeared in a range of comic books that have been published in Japan and the United States.

Ryan North is a Canadian writer and computer programmer. He is the creator and author of Dinosaur Comics, and has written for the comic series of Adventure Time and Marvel Comics' The Unbeatable Squirrel Girl. His works have won multiple Eisner Awards and Harvey Awards and made New York Times Bestseller lists.

The International Network of Disney Universe Comic Knowers and Sources (I.N.D.U.C.K.S.) or Inducks is a freely available database aiming to index all Disney Universe comics ever printed in the world. It is an international project which provides indexes of around 130,000 Disney comic publications worldwide. It is distributed with its own licence.

John Tartaglione, a.k.a. John Tartag and other pseudonyms, was an American comic book artist best known as a 1950s romance-comics artist; a Marvel Comics inker during the Silver Age of comic books; and the illustrator of the Marvel biographies The Life of Pope John Paul II and Mother Teresa of Calcutta, the first of which at least sold millions of copies worldwide in several languages.

George D. Klein was an American comic book artist and cartoonist whose career stretched from the 1930s and 1940s' Golden Age of comic books until his death in 1969. He was best known as an inker for DC Comics, where he was an integral part of the Superman family of titles from 1955 to 1968, and for Marvel Comics, where he was the generally recognized, uncredited inker on Jack Kirby's pencil art for the landmark comic book The Fantastic Four #1.

Jerry Gwin Bails was an American popular culturist. Known as the "Father of Comic Book Fandom," he was one of the first to approach the comic book field as a subject worthy of academic study, and was a primary force in establishing 1960s comics fandom.

Samuel E. Grainger was an American comic book artist best known as a Marvel Comics inker during the 1960s and 1970s periods fans and historians call, respectively, the Silver Age and the Bronze Age of Comic Books. Series on which he worked include The Avengers, The Incredible Hulk and X-Men.

William Bryan Dubay, who wrote as Bill DuBay and under the pseudonyms Will Richardson, and Dube, was an American comic-book editor, writer and artist best known as editor and writer for Warren Publishing, including that company's horror-comics magazines Creepy, Eerie and Vampirella. 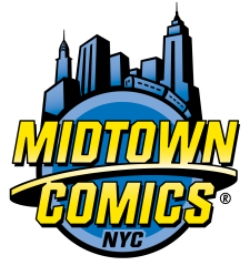 Midtown Comics is a New York City comic book retailer with three shops in Manhattan and an e-commerce website. The largest comic book store in the United States, the company opened its first store in the Times Square area in 1997. Its second was opened on Lexington Avenue in 2004, and is known as the Grand Central store for its proximity to Grand Central Terminal. Its downtown store was opened on Fulton Street in the Financial District in November 2010, and its Astoria, Queens outlet store opened in March 2020. It also used to operate a boutique inside Manhattan's Times Square Toys R Us.

Daniel DeBono is an American writer and novelist. 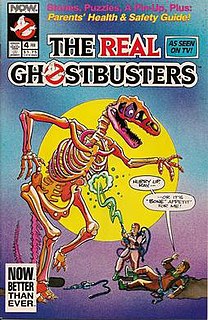