In England, Wales and Northern Ireland, school governors are the overseers of a school. In state schools they have three main functions: [1] of:

They are the largest volunteer force in the country. [2]

In England, Wales and Northern Ireland, every state school has a governing body, consisting of specified numbers of various categories of governors depending on the type and size of school. Governors are unpaid, but they may be reimbursed for expenses for such as the care of dependants or relatives and travel costs. Under section 50 of the Employment Rights Act 1996 employers must give anyone in their employment who serves as a governor reasonable time off their employ to carry out their governor duties. Employers can decide whether this time off is given with or without pay. [3]

Generally, the following categories are applicable:

The proportions vary between differing types of school, but as an example, in community schools, which are usually owned by the LEA, the regulations prescribe that parent governors should be at least one-third of the governors, staff governors at least two places, but no more than one-third, including the headteacher; LEA governors 20% and community governors at least 20%. Church schools will typically include a representative of the church in addition to the above categories. The minimum number of governors is nine, the maximum is twenty (although sponsor governors are additional to these numbers). Governors are appointed for a maximum of four years, this term is renewable.

The headteacher of each school is ex officio a staff governor, but he or she can decline to take up the position. Should they decide not to become a member of the governing body, their place is left vacant. [4]

Parent governors can either be elected by parents of children at the school, or if insufficient numbers are elected, can be appointed by the governing body to fill any remaining vacancies. Such appointees need not be parents of children currently attending the school – if no suitable candidates are found, they may be parents of former pupils, or of any child of school age. Parents so appointed can be removed from their positions by a majority vote of the governing body.

By law, governing bodies meet at least three times every year, as a full governing body, where the ongoing business of committees, the governing body and the school are discussed, reported on and where decisions are taken by a majority vote. Most of the work of governors, however, is done at committee level.

The governing body is led by the chair, elected by the governing body from within its membership, though anyone who works at the school cannot stand for the office. Since 1 September 2003, the term of office for the chair can be set to more than one year.

The chair is supported in their work by one or more vice chairs, who may be delegated certain tasks or responsibilities. Certain tasks, including signing-off the school budget, can only be done by the chair.[ citation needed ] The process for election of chair and vice-chair and their term of office should be laid down in the governing body's standing orders.

The full governing body can remove the chair or any vice chairs by a majority vote of no confidence.

The governors are supported in their work by a clerk to the governing body. In many schools this role is combined with that of bursar or administrative officer, although they may also be employed solely in a clerking role. In some areas clerking services may be provided by the local education authority. The clerk is remunerated for their work.

The clerk is usually considered an integral part of the governing body, giving advice whilst not entitled to vote. Their role is primarily one of providing advice and interpretation on the regulatory and administrative framework in which governors work, preparing and distributing minutes and agendas, keeping records and dealing with correspondence.

Schools generally have a delegated budget to cover salaries, running costs, maintenance and equipment; the governing body is responsible for managing this budget. They can decide how many and what types of staff to employ, which equipment to upgrade or replace and what the priorities are for implementing new strategies and initiatives.

Governors must appoint the headteacher, and may be involved in the appointment of other staff. [5]

Governors must review school exclusions in certain circumstances, and have the power to reinstate an excluded pupil or reduce the term of the exclusion (although not to increase it).

Foundation schools, voluntary aided schools and academies act as their own admissions authorities. In such schools, the governing body sets the admissions policy, makes admissions decisions and defends admissions appeals.

Most governing bodies use a committee structure to undertake their monitoring and evaluation roles. Membership and terms of reference of committees must be determined annually. Finance, staffing, admissions, health and safety, curriculum and premises committees are very common. Other areas covered by committees may include marketing, discipline and management. Many governing bodies form working groups to tackle specific problems.

Since 1 September 2003, particular committees can be given delegated powers to make decisions about the school that do not then require any approval by the full governing body

Governors and clerks can be offered training and support either by the local authority, by central government or by other organisations.

There are a number of organisations, websites and resources that support governors and governing bodies in England and Wales.

The Key for School Governors is a subscription service which provides up-to-the-minute intelligence and resources to support governing boards. In addition to e-learning and online tools like Compliance Tracker, The Key offers free online governor induction in partnership with Governors for Schools and Lloyd's Banking Group.

The National Governors' Association is a representative body for school governors in England. The NGA is an independent charity. Governors can join the NGA as individuals, as members of a governing body, or through their local governors' association.

GovernorLine offers free, confidential advice, information and support to school governors, clerks and individuals involved directly in the governance of maintained schools in England. GovernorLine is a free service delivered by an organisation called WorkLife Support under contract to the UK government.

GovernorNet.co.uk was a UK government website with information for school governors. It was closed by the Department for Education in April 2011, with a recommendation to governors to use the variety of forums that are available including UK Governors and TES Connect.

Independent schools, and public schools in particular, generally have governing bodies, although by their very nature, such schools usually decide on their own requirements for their composition.

A study published in 1995 examined whether they were bodies of 'active citizens' providing opportunities for democratic participation in the governance of schools or unpaid volunteers doing the bidding of the state. It also found that the composition and functioning of governing bodies was shaped by the social divisions of class, race and gender. [7]

The Kings of Wessex Academy, formerly known as The Kings of Wessex School, is a coeducational secondary school located in Cheddar, Somerset, England. As of 2015, it has 1,176 students aged 13 to 18, of all genders and all ability levels including 333 in the sixth form. In November 2016, the academy became part of the Wessex Learning Trust which incorporates eight academies from the surrounding area. Kings is a Church of England school. 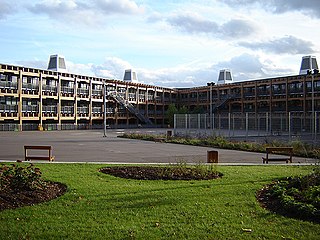 An Academy school in England is a state-funded school which is directly funded by the Department for Education and independent of local authority control. The terms of the arrangements are set out in individual Academy Funding Agreements. Most academies are secondary schools. However, slightly more than 25% of primary schools, as well, as some of the remaining first and middle schools, are also academies.

St Mary Redcliffe and Temple School is a Church of England voluntary aided school situated in the district of Redcliffe, Bristol, England. The school was formed by a merger of Redcliffe Boys School and Temple Colston school; the former was founded in 1571. It provides education for approximately 1,600 students aged 11 to 18. The school's church is St Mary Redcliffe. It is the only Church of England School for the Diocese of Bristol. The headteacher is Elisabeth Gilpin and the Director of Sixth Form is Richard Wheeler.

Expulsion refers to the removal or banning of a student from a school system or university due to persistent violation of that institution's rules, or in extreme cases, for a single offense of marked severity. Laws and procedures regarding expulsion vary between countries and states.

The Education and Inspections Act 2006 is an Act of the Parliament of the United Kingdom. According to the government the Act "is intended to represent a major step forward in the Government’s aim of ensuring that all children in all schools get the education they need to enable them to fulfil their potential".

Bishop Walsh Catholic School is a coeducational secondary school and sixth form with academy status, located in Sutton Coldfield, Birmingham in the West Midlands of England.

Outwood Academy Ormesby is a mixed secondary school with academy status, located in the Netherfields area of Middlesbrough, England. It has an enrolment of 900 pupils ages 11 to 16, with a comprehensive admissions policy.

The Education Act 2011 is an Act of the Parliament of the United Kingdom. It was the first major piece of education legislation to be introduced by the coalition government, and makes changes to many areas of educational policy, including the power of school staff to discipline students, the manner in which newly trained teachers are supervised, the regulation of qualifications, the administration of local authority maintained schools, academies, the provision of post-16 education, including vocational apprenticeships, and student finance for higher education. 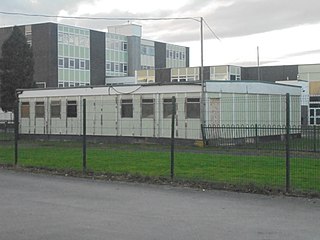 Multi-Academy Trust (MAT) or academy chain is an academy trust that operates more than one academy school. Academy schools are state-funded schools in England which are directly funded by the Department for Education and independent of local authority control. The terms of the arrangements are set out in individual Academy Funding Agreements. The group of schools in a multi-academy trust work together under a shared academy funding agreement.

The European Schools is an intergovernmental organisation, which has established, finances, and administers a small group of multilingual international schools, bearing the title "European School", which exist primarily to offer an education to the children of European Union (EU) staff; offers accreditation to other schools, bearing the title "Accredited European School", under national jurisdiction within EU member states to provide its curriculum; and oversees the provision of the secondary school leaving diploma, the European Baccalaureate.