Smash Palace is a New Zealand feature film that premiered at Cannes in May 1981 and was released theatrically in April 1982. The film chronicles a former race car driver (played by Bruno Lawrence) who inadvertently contributes to the end of his marriage, then kidnaps his daughter (Greer Robson). Lawrence's character runs a carwrecking yard in an isolated area of New Zealand's North Island.

Smash Palace was the second feature directed by Roger Donaldson. Critical acclaim in the United States won him interest from Hollywood, and the chance to direct the first of a number of films financed outside of New Zealand, The Bounty .

The soundtrack was composed and performed by New Zealand-born singer Sharon O'Neill. Smash Palace has an R16 rating.

Retired international racing driver Al Shaw returns home to take over his late father's car-wrecking yard, "Smash Palace", on the remote North Island Volcanic Plateau. Al's French-born wife Jacqui is increasingly unhappy with Al's obsession with cars and refusal to sell the yard, and fears for the future of their daughter Georgie.

Jacqui begins a relationship with Al's best friend, local police officer Ray Foley. When Al finds Jacqui and Ray together, he violently beats and rapes his wife. Jacqui leaves Al, taking Georgie with her. Jacqui subsequently takes up a job as a teacher and continues her relationship with Ray.

Al can't adjust to the separation and harasses Jacqui in his constant efforts to see his daughter. Al plans to make a racing comeback, and Jacqui forbids Al from taking Georgie to the race. In response, he destroys part of Jacqui's house with his tow truck, and is arrested. Jacqui subsequently takes out a protection order on Al to prevent him seeing Georgie.

Al sets up a hideout deep in the bush, then kidnaps Georgie from Jacqui at gunpoint. He pushes his tow truck off a cliff into a river to create a diversion for police.

Al and Georgie get reacquainted in their bush hideout, but suddenly Georgie falls ill. Al drives into town and robs a pharmacy at gunpoint, where he is spotted by a patrolling police car. He takes the pharmacist hostage and flees with her and Georgie back to Smash Palace.

Ray and Jacqui arrive at the hostage scene. Jacqui defies orders and runs through the cordon to reunite with her husband and daughter. Al hands over Georgie, and agrees to let the pharmacist go in exchange for Ray.

The film was funded by the New Zealand Film Commission. When Donaldson first applied for funding, he was turned down. On a second attempt he was once again denied funding, until veteran film maker John O’Shea pointed out that Donaldson's earlier work Sleeping Dogs had been the reason the commission was founded. [2]

One of the conditions of the film's eventual funding by the NZFC was that it be completed in time to screen at the 1981 Cannes Film Festival. This forced a tight schedule on the production team, giving only four months between the commencement of the shoot and the film's premiere. [3]

Although the film was completely New Zealand financed and shot, the film was first released in the USA. The expectation was that by initially releasing in the US the film would gain positive reviews from international critics, thus encouraging local audiences, prone to a dismissal of Kiwi product as amateurish, to go and see the film. The strategy worked, with the film proving hugely successful in New Zealand. [4]

The film won much acclaim for the performance of Bruno Lawrence, one of New Zealand's best-known actors. It was successful in its home land, and received positive reviews in the United States; Veteran critic Pauline Kael described it as "amazingly accomplished". Roger Ebert called it one of the best films of 1981, "so emotionally wise and observant that we learn from it why people sometimes make the front pages with guns in their hands and try to explain that it's all because of love". The New York Times picked it as one of its ten best movies of the year. [5]

At the 1982 Manila Film Festival, Bruno Lawrence received an award for Best Actor for his portrayal of Al Shaw.

Roger Lindsey Donaldson is an Australian-born New Zealand film director, producer and writer whose films include the 1981 relationship drama Smash Palace, and a run of titles shot in the United States, including the Kevin Costner films No Way Out (1987) and Thirteen Days (2000), and the 1997 disaster film Dante's Peak. He has worked twice with actors Kevin Costner, Pierce Brosnan, Anthony Hopkins and Michael Madsen.

Raetihi, a small town in the center of New Zealand's North Island, is located at the junction of State Highways 4 and 49 in the Manawatū-Whanganui region. It lies in a valley between Tongariro and Whanganui National Parks, 11 kilometres west of Ohakune's ski fields.

The World's Fastest Indian is a 2005 New Zealand biographical sports drama film based on the Invercargill, New Zealand, speed bike racer Burt Munro and his highly modified 1920 Indian Scout motorcycle. Munro set numerous land speed records for motorcycles with engines less than 1,000 cc at the Bonneville Salt Flats in Utah in the late 1950s and into the 1960s. The film stars Anthony Hopkins, and was produced, written and directed by Roger Donaldson.

The following lists events that happened during 1982 in New Zealand.

The following lists events that happened during 1983 in New Zealand.

The following lists events that happened during 1985 in New Zealand.

Horopito is a locality in the North Island of New Zealand. It lies on State Highway 4 between the village of National Park and the town of Raetihi.

Taika David Cohen, known professionally as Taika Waititi, is a New Zealand film and television director, producer, screenwriter, actor, and comedian. He is a recipient of an Academy Award, a BAFTA Award, a Grammy Award, and nominations for two Primetime Emmy Awards. His feature films Boy (2010) and Hunt for the Wilderpeople (2016) have each been the top-grossing New Zealand film.

Greer Robson-Kirk is a New Zealand television actress well known for her role in the television drama Shortland Street.

Super City is a New Zealand television comedy series starring Madeleine Sami and directed by Taika Waititi. Season 1 premiered on the TV3 network in 2011. The series was picked up as a comedy presentation by American Broadcasting Company in 2012. The series opened with a healthy 24 per cent share of the 25-54 age bracket, earning it 11th place on TV3's ratings table for the week. The second season, directed by Oscar Kightley, premiered on 26 July 2013.

Julian Dennison is a New Zealand actor. He debuted in the 2013 film Shopping, for which he won the English Film and Television Award for Best Supporting Actor. He is known for his roles as Ricky Baker in Hunt for the Wilderpeople (2016), the highest-grossing New Zealand film in history, as Russell "Firefist" Collins in Deadpool 2 (2018), and as Belsnickel in The Christmas Chronicles 2. Dennison has appeared in multiple commercials for companies including Lynx and Air New Zealand. In 2021, Dennison made his first appearance in the MonsterVerse as Josh Valentine in Godzilla vs. Kong. 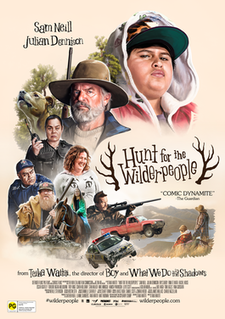 Hunt for the Wilderpeople is a 2016 New Zealand adventure comedy-drama film written and directed by Taika Waititi, whose screenplay was based on the book Wild Pork and Watercress by Barry Crump. Sam Neill and Julian Dennison play "Uncle" Hector and Ricky Baker; a father figure and foster son who become the targets of a manhunt after fleeing into the New Zealand bush. Carthew Neal, Leanne Saunders, Matt Noonan, and Waititi produced the film.

Smash Palace is the first extended play by New Zealand singer and songwriter Sharon O'Neill. The EP is a soundtrack to the 1982 Roger Donaldson film, Smash Palace.