The first high school in what is now South Portland was built in 1874 while the City was part of Cape Elizabeth, Maine. The school was on the 2nd floor of a new municipal building built in 1874 until that building burnt down in 1921. The current building on Highland Avenue was erected in 1952, with a gymnasium added in 1958, an annex in 1962, and an auditorium and cafeteria in 1997. [2] It was originally built for middle (then “junior high”) school students until the high school and middle school switched building in 1960. [3]

The current high school building has been renovated and expanded. Renovation was approved in a 2010 referendum, and groundbreaking took place in May 2012. [4] Over 100,000 square feet was added to the school. The first stage of expansion to the school was complete in early January 2014. [5] On January 3, 2015, the final phase of the renovations were completed and staff moved into the building to set up for class on January 5. In total, the project lasted 33 months and cost a total of $47.3 million. At the time, it was among the highest-price high school projects in state history and was paid for entirely without state funds. [6] 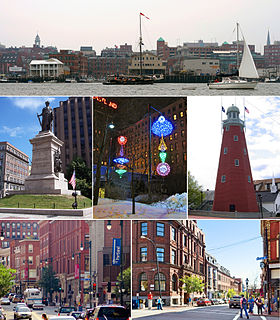 Portland is the most populous city in the U.S. state of Maine and the seat of Cumberland County. Portland's population was 66,215 as of 2019. The Greater Portland metropolitan area is home to over half a million people, the 105th-largest metropolitan area in the United States. Portland's economy relies mostly on the service sector and tourism. The Old Port district is known for its 19th-century architecture and nightlife. Marine industry still plays an important role in the city's economy, with an active waterfront that supports fishing and commercial shipping. The Port of Portland is the second-largest tonnage seaport in New England.

South Portland is a city in Cumberland County, Maine, United States, and is the fourth-largest city in the state, incorporated in 1898. As of the 2010 census, the city population was 25,002. According to a 2019 Wolfram Alpha estimate, the population rose to 25,532, an increase of 530 from the 2010 census. Known for its working waterfront, South Portland is situated on Portland Harbor and overlooks the skyline of Portland and the islands of Casco Bay. Due to South Portland's close proximity to air, marine, rail, and highway transportation options, the city has become a center for retail and industry in the region. 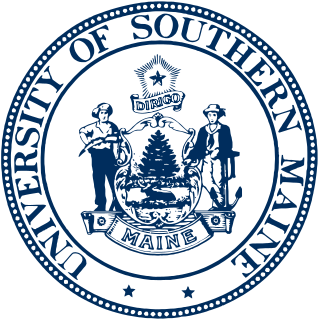 The Downeaster is a 145-mile (233 km) regional passenger train service, managed by the Northern New England Passenger Rail Authority (NNEPRA), an agency of the state of Maine, and operated by Amtrak. Named for the Down East region of Maine, the train runs from North Station in Boston, Massachusetts to Brunswick, Maine, with 10 intermediate stops. The train operates five daily round trips between Boston and Brunswick. 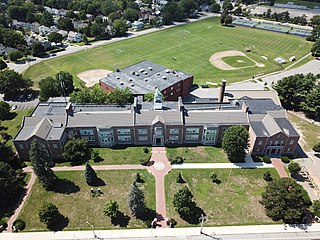 Fitzpatrick Stadium is a 6,000 seat multi-purpose outdoor stadium in Portland, Maine. It is located between Interstate 295, Hadlock Field baseball stadium, and the Portland Exposition Building, the second oldest arena in continuous operation in the United States. It is located across the street from Deering Oaks, a public park listed on the National Register of Historic Places. Formerly known as Portland Stadium, it was renamed in 1989 to honor James J. Fitzpatrick, one of the most respected figures in Maine athletic history. 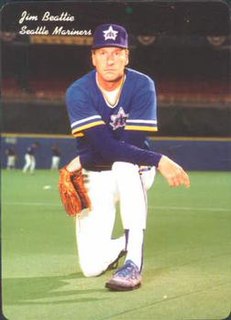 James Louis Beattie is an American former professional baseball pitcher. He also served as the Montreal Expos' General Manager from 1995 to 2001, and was the Baltimore Orioles general manager with Mike Flanagan from 2003 to 2005. As of 2010, Beattie served as a professional scout in the Toronto Blue Jays organization through the 2018 season. Beattie retired from his decades-long career in the MLB at the end of the 2018 season. Beattie starred in baseball and basketball at South Portland High School in South Portland, Maine. 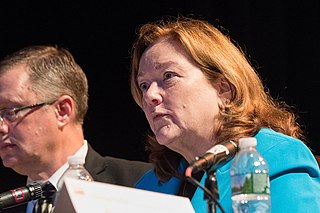 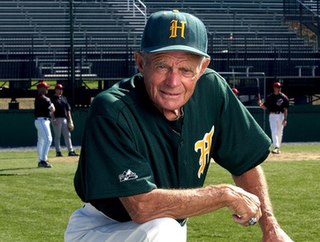 John W. Winkin Jr. was an American baseball coach, scout, broadcaster, journalist and collegiate athletics administrator. Winkin led the University of Maine Black Bears baseball team to six College World Series berths in an 11-year span. In 2007, at age 87, he was the oldest active head coach in any collegiate sport at any NCAA level. In all, 92 of his former players wound up signing professional baseball contracts. Elected to 11 different halls of fame, including the National College Baseball Hall of Fame in 2013, he finished his college baseball coaching career in 2008 with 1,043 total wins, which ranks 52nd all-time among NCAA head coaches. He died in 2014.

John Butterfield was an American college baseball coach and professional baseball executive. Butterfield grew up in Westborough, Massachusetts and played college baseball for Maine in the early 1950s and later was the head coach at Maine and South Florida. In the late 1970s, he became an executive in the New York Yankees organization before he died in a car crash in November 1979.

At the end of each regular season, the America East Conference names major award winners in baseball. Currently, it names a Coach, Pitcher, Player, and Rookie of the Year. With the exception of Rookie of the Year, which was added in 1996, the awards date to the 1990 season, the conference's first season of baseball. Through the 1996 season, the awards were known as the major awards of the North Atlantic Conference, the America East's former name.

Steve Trimper is an American college baseball coach who is currently the head coach for the Stetson Hatters baseball team out of the Atlantic Sun Conference. Additionally, he is a published author of "Walk Off Winning, A game plan for leading your team and organization to success." Previously, he served as the head coach at Maine from 2006 to 2016 and Manhattan from 1999 to 2005. An alumnus of Eastern Connecticut State University, Trimper played baseball there from 1990 to 1992 and was a member of the Warriors' 1990 Division III national championship team.

Bob Whalen is an American college baseball coach who has been the head coach of Dartmouth since the start of the 1990 season. Under him, the Big Green have appeared in two NCAA Tournaments. A Maine alumnus, Whalen worked as an assistant coach there from 1982 to 1989.

The Maine Sports Hall of Fame is sports hall of fame in the U.S. state of Maine. According to the hall, it was founded in 1972 to serve two main purposes: