Sports Challenge is a sports-centered game show that aired in weekly syndication from 1971 to 1979, with a separate version that aired briefly on CBS weekends from May 20, 1973 to September 9, 1973. Dick Enberg was host. Johnny Gilbert, Art James, and John Harlan announced.

The show was taped at the KTLA/Golden West studios in Los Angeles (known today as Sunset Bronson Studios), with the exception of some shows taped at Metromedia Square.

The show's theme throughout its run was an instrumental version of The Beatles' "Get Back" by Pat Williams, from his Verve Records album Heavy Vibrations; a different theme was briefly used for the 1977–1978 season, but the original theme replaced it for the show's final season.

Sports Challenge featured two teams of three sports figures representing a sport or a team. In the latter case, the teams could be made up of former players or members of the current team, solely dependent on whom the show's producers were able to book. During the early part of the run, Dick Enberg would read a disclaimer that "Sports Challenge is a game of quick recall, and whether our stars win or lose is not solely based on knowledge, but on how they react to the questions." [1]

Four rounds were played. In each round, a film clip was shown, and a toss-up question would be asked about or pertaining to the clip. The first team to buzz in with a correct answer earned 20 points and a chance at scoring more with two 10-point "free throws." If no one answered correctly on the first toss-up, the free throws became toss-ups. On the toss-up, when ringing in, they must answer the question immediately. If incorrect or run out of time, the opposing team gets five seconds to confer amongst themselves before answering the question.

On a free throw, if the team to which the free throw is assigned is unable to answer correctly within five seconds for 10 points, the other team can steal with a correct answer to pick up 20 points. [1]

Some questions about or pertaining to the clip could contain either multiple choice or contain clues.

Partway through the run, the Classic Round was played after the third round before the Bonus Biography. One final film clip was shown, and the question that followed it was worth 30 points.

After the 30-point question, the Bonus Biography was played. A silhouette of a famous athlete was shown on-screen, and the teams would have 60 seconds (originally 90 seconds) [1] to figure out who it was based on clues given by announcer Gilbert (although Enberg later took over this duty). The team that answered this correctly earned one point for every second left on the clock. At one point in the show's run, if neither team successfully identified the subject, the subject won a new car.

Occasionally, the Bonus Biography description would be finished by stating the subject's name prior to the expiration of time. When that happened, a single toss-up question would be asked for the remainder of the points. [2]

Rarely, the Bonus Biography subject would divulge himself prior to taping. In that case, Enberg would ask a question about that subject and read clues to the answer to that question on the clock. [3] The show would also use this procedure (without the clock) to break a tie at the end of the Bonus Biography round. [4]

For at least the first few episodes, each participant also received $1 for every point their team scored; [1] By the middle of the first season, no references to any such cash winnings were made.

The winning team returned the following week to face a new set of challengers, and continued until defeated. The team of Tommy Henrich, Joe DiMaggio, and Lefty Gomez (New York Yankees) set a record for winning the game 8 consecutive times, which was tied once by the team of Duke Snider, Don Drysdale, and Don Newcombe (Brooklyn Dodgers) during the show's final season, in 1979.

The Best of Sports Challenge

In 1982, Enberg and partners, including Billy Packer and Don McGuire, created "Oh My!" Productions and purchased the Sports Challenge library, plus the right to produce new shows, from Gerry Gross Productions. Oh My entered an agreement with ESPN to air the old shows under the title The Best of Sports Challenge, with updated openings by Enberg. National rights holders, including MLB and the NFL, challenged Oh My's rights, proving that Gross owed them residual fees, and the shows were taken off after a year. However, some Best of prints continue to circulate among the reruns still airing today. [ citation needed ]

In 1973, Mattel released the "Sports Challenge Instant Replay" toy, in which the user would insert a small pre-recorded disc to learn information about a certain athlete or activity. The unit was promoted on-air by Enberg and given to all athletes who competed on the show.

Later in the show's run, Scarab released a series of 7" picture discs, which featured Enberg reading statistics about a famous baseball player, then asking a difficult trivia question about the player. About a dozen records were released.

Sports Challenge is believed to be completely intact and in the control of Enberg's estate. Classic Sports Network (now ESPN Classic), ESPN, and ESPN2 have all aired the series in the past.

The National Science Bowl (NSB) is a high school and middle school science knowledge competition using a quiz bowl format held in the United States. A buzzer system similar to those seen on popular television game shows is used to signal an answer. The competition has been organized and sponsored by the United States Department of Energy since its inception in 1991. 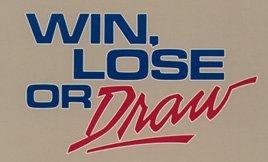 Win, Lose or Draw is an American television game show that aired from 1987 to 1990 in syndication and on NBC. It was taped at CBS Television City, often in Studios 31, 33, and 43 at various times. It was co-produced by Burt & Bert Productions and Kline & Friends for Disney's Buena Vista Television. It has also had two versions on The Disney Channel: Teen Win, Lose or Draw from 1989 to 1992, and a revived version known as Disney's Win, Lose or Draw which aired in 2014.

Idiot Savants was an American television game show on the MTV network which ran from December 9, 1996 to April 25, 1997. It was created by Michael Dugan and Chris Kreski, directed by Steve Paley, and hosted by comedian Greg Fitzsimmons.

Go is an American television game show created by Bob Stewart and aired on NBC from October 3, 1983, to January 20, 1984. The show featured two teams, each composed of four contestants and a celebrity. The teams had to construct questions one word at a time to convey a word or phrase to their teammates. The concept of Go was based on a bonus round used on Chain Reaction, another game show created by Stewart.

Make the Grade is a children's game show that aired from October 2, 1989 through December 29, 1991 on Nickelodeon. 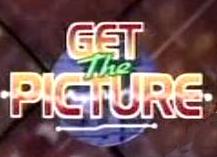 Get the Picture is an American children's game show that aired from March 18 to December 6, 1991, on Nickelodeon. Hosted by Mike O'Malley, the show features two teams answering questions and playing games for the opportunity to guess a hidden picture on a giant screen made up of 16 smaller screens. The show was taped at Nickelodeon Studios at Universal Studios in Orlando, Florida. The program's theme music and game music was composed by Dan Vitco and Mark Schultz, and produced by Schultz. Its tagline is The Great Frame Game. 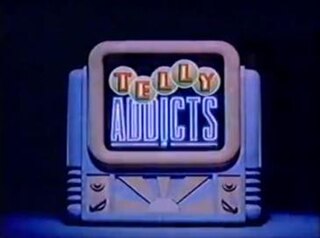 Telly Addicts is a British television game show that aired on BBC One from 3 September 1985 to 29 July 1998, and hosted by Noel Edmonds. All questions were based on television programmes past and present, and generally took the form of a short clip being shown followed by a series of questions either specifically about the clip or more generally about the programme from which it had been taken. Two teams sat opposite each other on sofas. The final series in 1998 had three teams of two players.

Headline Chasers is a syndicated game show that ran daily from September 9, 1985 to May 23, 1986, with reruns airing until September 5. The series was hosted by Wink Martindale, who also created the series and was its executive producer, with Johnny Gilbert serving as announcer. The show was a co-production of Wink Martindale Enterprises and Merv Griffin Enterprises with King World Productions, Griffin's partner for his other syndicated game show offerings, as distributor. Headline Chasers was recorded at TAV Celebrity Theater in Hollywood, the same studio which housed The Merv Griffin Show.

Blackout is an American game show that was broadcast on CBS as part of its daytime schedule from January 4, 1988 until April 1, 1988. The program was created and produced by Jay Wolpert.

Trashed was a television game show that ran on MTV from February 14 to July 23, 1994 with Chris Hardwick as host.

Free 4 All is an American game show that aired on USA Network from June 27 to November 4, 1994. The show was hosted by Mark L. Walberg, who to that point had been better known as an announcer, and was a production of Stone Stanley Entertainment.

My Generation is a game show on VH1 that was hosted by comedian Craig Shoemaker and announced by Lindsay Stoddart. Its 48 episodes aired for a brief period in 1998, and due to its similar format and emphasis on music, is considered to be a semi-revival of the 1969 ABC series The Generation Gap. 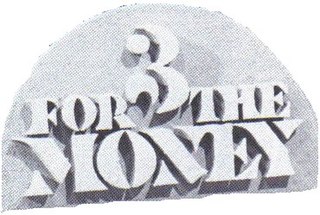 Rumor Has It was an American daily game show that aired on the cable channel VH1 from June 7 to October 28, 1993. Brian O'Connor was the host and John Ten Eyck announced.

The 3rd Degree is a British quiz show broadcast on BBC Radio 4, hosted by comedian Steve Punt and made by Pozzitive Productions. The series is recorded at different universities around the country, the contestants all coming from the university in which the recording takes place. One teams consists of three students and the other of three lecturers who teach the subjects the students are studying.