A former postman, the high point of his career was his sole ranking title – the Classic in 1990, beating Australian Warren King 10–6 in the final. His world ranking peaked at number seven the following season, the best of his five seasons in the top sixteen. [2]

On 14 April 1990, in his match against Alex Higgins at the World Snooker Championship in Sheffield, James became the first player to produce a 16-red total clearance in competitive play. In other words, he potted 16 reds and 16 colours consecutively, followed by all the coloured balls in order: a situation that was only possible because he was awarded a free ball before any red had been potted. [3]

A year later he reached the semi-finals of the World Snooker Championship, beating defending champion Stephen Hendry in the quarter-finals (it was six years before anyone else beat Hendry in the tournament: Ken Doherty in 1997). He was beaten in the semi-final by Jimmy White, with whom he shares his birthday; coincidentally, the match began on their birthday, 2 May.

James became wealthy through snooker, but was banned from driving in 1996, [4] and in 1998 declared himself bankrupt after spending £700,000 on "fast living", even having to sell his practice table. [5] His financial problems saw him turn to drinking heavily. [2] A diabetic, James missed the British Open in 2004 due to a kidney infection. [6]

He was the first player ever to score two centuries on his Crucible debut, including a 140, the second highest by a debutant of all time. In addition to 1991, he reached the quarter-finals on his debut in 1988, and the last 16 on three further occasions.

Steve Davis, is an English retired professional snooker player from Plumstead, London. His professional playing career spanned 38 seasons from 1978 until 2016, but he is best known for dominating the sport during the 1980s, when he reached eight World Snooker Championship finals in nine years, won six world titles, and held the world number one ranking for seven consecutive seasons. The first player to make an officially recognised maximum break in professional competition, and the first to earn £1 million in prize money, he famously was runner-up to Dennis Taylor in one of the sport's most memorable matches, the 1985 World Snooker Championship final. Its dramatic black-ball conclusion attracted 18.5 million viewers, setting UK records for any broadcast after midnight and any broadcast on BBC Two that still stand to this day. Davis was named the BBC's Sports Personality of the Year in 1988, and he remains the only snooker player to win the award.

Stephen Gordon Hendry is a Scottish professional snooker player and a commentator for the BBC and ITV. As a seven-time World Champion, he is the most successful player in the modern era of the World Snooker Championship and holds the record for the most seasons as world number one. His first world title in 1990, at the age of 21, made him the youngest-ever World Champion.

Joe Johnson is an English former professional snooker player and commentator, best known for winning the 1986 World Championship after starting the tournament as a 150–1 outsider.

Paul Alan Hunter was an English professional snooker player. He was a three-time Masters champion, winning the event in 2001, 2002, and 2004, recovering from a deficit in the final to win 10–9 on all three occasions. He also won three ranking events: the Welsh Open in 1998 and 2002, and the British Open in 2002. During the 2004–05 snooker season, he attained a career-high ranking of number four in the world.

Alan McManus is a retired Scottish professional snooker player and now commentator. A mainstay of the world's top sixteen during the 1990s and 2000s, he has won two ranking events, the 1994 Dubai Classic and the 1996 Thailand Open, and competed in the World Championship semi-finals in 1992, 1993 and 2016. He also won the 1994 Masters, ending Stephen Hendry's five-year, 23-match unbeaten streak at the tournament with a 9–8 victory in the final. McManus announced his retirement on 9 April 2021 after losing 6–3 to Bai Langning in the second qualifying round of the 2021 World Snooker Championship.

Terence Martin Griffiths, is a retired Welsh professional snooker player and current snooker coach and pundit. In his second professional tournament, he became world champion as he won the 1979 World Snooker Championship as a qualifier, defeating Dennis Taylor by 24 frames to 16 in the final. Nine years later, in 1988, Griffiths reached the final of the competition again. He was tied with Steve Davis at 8–8, but lost the match 11–18.

John Stephen Parrott, is an English former professional snooker player and television personality. He was a familiar face on the professional snooker circuit during the late 1980s and throughout the 1990s, and remained within the top 16 of the world rankings for fourteen consecutive seasons. 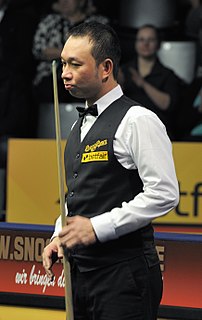 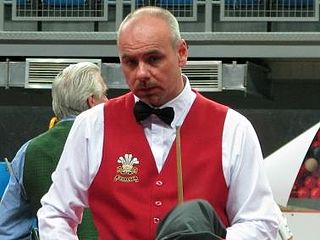 Darren Morgan is a Welsh former professional snooker player who now competes as an amateur.

Neal Foulds is an English former professional snooker player and six-time tournament winner, including the 1986 International Open, the 1988 Dubai Masters and the 1992 Scottish Masters, as well as the invitational Pot Black in 1992. He was the runner up for the UK Championships in 1986, the British Open in 1987 and reached the semi finals of the Masters on three occasions, as well as the World Championship. After his retirement, Foulds became a commentator for the BBC and is currently part of the presenting team for ITV and Eurosport. 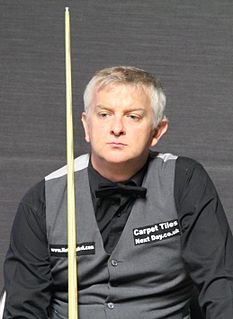 Barry Pinches is an English professional snooker player, recognisable for his bright and flamboyant waistcoats, which usually feature the yellow and green colours of Norwich City F.C.. He is a former top 32 player and ranking-event quarter-finalist. He has compiled over 100 century breaks in his career, becoming the 33rd player to have done so. He has also made one maximum break.

Rod Lawler is an English former professional snooker player. He is noted for his slow playing style, which gave rise to his nickname, "Rod the Plod".

Dennis Taylor is a Northern Irish retired professional snooker player and current commentator. He is best known for winning the 1985 World Snooker Championship, where he defeated the defending champion Steve Davis in a final widely recognised as one of the most famous matches in professional snooker history. Despite losing the first eight frames, Taylor recovered to win 18–17 on the last black ball. The final's dramatic conclusion attracted 18.5 million viewers, setting UK viewership records for any post-midnight broadcast and for any broadcast on BBC Two that still stand to this day.